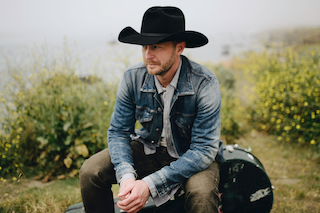 Brant said it’s amazing how many musicians are out on the road right now, especially in Canada.

“I think people have a lot of opportunity to see shows. They seem super excited when we come out on the road. I think one of the comments we get back most commonly is — ‘You guys just look like you’re having fun up there.’ That’s the way we’ve always approached it, me and the guys in the band. If we’re not having a good time the audience can’t possibly have a good time,” he explained.

“We just do everything we can to make sure we leave it all up there on the stage and have fun with everybody,” he added.

Brandt has been travelling and making music for over 20 years. Creating a setlist for a live show can sometimes be a challenge, he said. But, the new tour will include new music from the two EPs and of course, the hits. “The ones people are going to be able to sing along too. It’s a bit of a mix and just trying to do everything we can to connect with people with the music.”

Over the past 12 to 15 years, Brandt said, the majority of the live shows have been in Canada. “In the early years, we were doing a lot more international touring and probably close to about 180 shows a year. That’s fun and I really enjoy it. We still will throw shows in the United States or international shows into the mix every once in a while. The majority of touring is in Canada right now.”

“I’ve got a 10-year-old boy and an eight-year-old girl and I like being a hockey dad too — so, it’s one of those things you’ve got to find a balance,” he said.

Brandt’s hits include “I Do” and “My Heart Has A History” — both of which were the first to chart by a male Canadian country artist on the U.S. Billboard Top 20 since 1976. His focus has also always been using his celebrity to help and shine a light on the lives of those less fortunate, and has encouraged others to do the same.

With his very own Buckspring Foundation, Brandt and his wife Liz have launched the “#NotInMyCity” campaign, which advocates and facilitates on behalf of women and children who are sexually exploited and trafficked in Canada. He also received a 2008 Juno Award for Humanitarian of the Year. “I’ve been working pretty diligently over the last 18 months on a project with an incredible team. The project is called ‘Not In My City.’ It’s an anti-human trafficking awareness campaign and movement. It’s seen incredible success. We’re starting to move information about ‘Not In My City’ across the entire country now and it has seen incredible support from partners and sponsors.”

“Creating the conversation, raising awareness, and pushing forward best practice relating to fighting human trafficking. Most people don’t even think about this. It’s just not on most people’s radar, but it’s one of the fastest growing crimes in Canada today. It’s really encouraging to me to see people are learning more about it,” he said.

Recently, a second six-song EP was released by Brandt this past fall entitled, “The Journey BNA: Vol. 2.” In combination with “YYC: Vol. 1,” — the two EPs complete the 12-song “The Journey YYC-BNA: Vol. 1 and 2” collection. “YYC and BNA are the airport codes for Calgary and Nashville. This whole project is a look back and is a bit of a discussion about what my journey has been like professionally, personally and where I might be seeing it going in the future.”

In an overarching way, Brandt noted, the EPs talk about what journeys and adventures are like, in general, for people. “It’s been a really fun project for me to work on,” he said.

Brandt’s “The Journey BNA: Vol. 2” charted as the Number One Country Album in Canada near the end of 2018. “It’s pretty exciting to see the response,” he added.

According to the singer and songwriter, it’s always wonderful when people respond to the material being recorded and released. “The connection that can be made through music is really what keeps me coming back.”

“I remember when I first moved to Nashville going to places like the Bluebird Cafe and see people I’ve never seen before perform and listening to them play, there’s just something electric about the connection that can be made through music and the communication that happens. I absolutely love it and it’s really fun to see that continuing,” Brandt said.

Paul Brandt’s “The Journey Tour” starts at 7 p.m. Tickets start at $57 and can be purchased online at enmaxcentre.ca.