‘Murder on the Orient Express’ live in Cardston 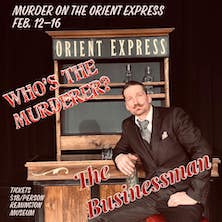 It’s a classic whodunit mystery being performed live in Cardston, for a limited time only.

Agatha Christie’s “Murder on the Orient Express” is being featured as a live production through this Saturday at the Remington Carriage Museum in Cardston. The show starts at 7:30 p.m.

According to the play’s director and performer Barb Nish, the play is being put on by a group of theatre enthusiasts that have done a ton of theatre. “We just got together with Howard, who manages the museum, and we’re doing it in conjunction with him,” she noted.

Nish added a group of Cardston theatre lovers got together to perform “Clue — The Musical” back in 2004 at the museum.

“I feel like I’ve been doing theatre all my life. My mother always said you directed every friend that ever came — dressed them up and directed them,” Nish joked, adding she majored in drama and moved back to Cardston in 1976.

Upon her return to the area, Nish said she was involved one way or another in every production in town — from the Carriage House Theatre to community theatre. Nish has been a performer, a director, and has even done make up and hair.

“I’ve done it all and I love theatre,” she added.