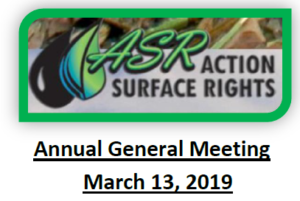 Action Surface Rights is an organization of landowners dedicated to helping fellow landowners understand and navigate the maze of government and industry processes when dealing with the energy sectors, whether it be oil/gas, transmission lines, or wind power in Alberta. Action Surface Rights is holding an Annual General Meeting (AGM) Mar. 13 at the Heritage Inn in Taber. Doors open at 12 p.m. The meeting will run from 1-3 p.m. All southern Alberta landowners are welcome to attend. There is a membership fee charged at the door.

“We provide resources, support, and information for landowners to help them make an informed decision when dealing with the energy giants. Guidance on how to deal with regulatory boards and hearings,” it is stated on the Taber-based organization’s website.

Board member Merv Cradduck said the group is very interested in looking after the landowner, especially surface rights and have also dealt with property rights issues. “We started out in the M.D. of Taber. Traditionally, there was very low lease payments.The energy industry did not want to up the ante any and it was over years. We got together, a bunch of us.”

“In this area, I think it’s three contracts we have done and we’ve managed to raise the compensation to landowners by quite a bit. With the last agreement we made, with one of the bigger companies in the area, and everybody seems to follow that pattern of dealings, we managed to hold onto what we had. I think we’ve done a fairly good job in that respect,” he explained.

Cradduck noted the organization has worked with landowners all over southern Alberta. The group, he added, has undergone changes, along with rebranding, and became Action Surface Rights in 2011. “This particular organization’s been around since the early 2000s. We traditionally always thought we represented the M.D. of Taber and it started out that way, but we have been expanding out well beyond the borders of the M.D. of Taber.”

Some of the items on the agenda at this year’s AGM include the Red Water case, a board member will discuss dealing with bankrupt companies and the problem of non-payment of energy leases, and a speaker will chat about plans to install solar panels on orphan well sites.