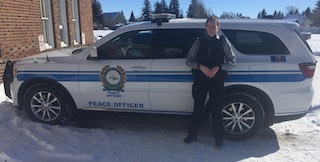 Ridge Regional Public Safety Services (RRPSS) welcomes Community Peace Officer (CPO) Shannon Stacey to the area. Stacey has been on the job for close two two months, after working as a CPO in Edmonton. She’s also has 10 years of peace officer experience. “But not in the rural setting. This is my first experience doing bylaws and working in a rural setting,” she noted.

RRPSS is located in the old Town Hall in Raymond. The office also has a new number 587-813-0791, which connects residents with the office’s main desk line.

“It doesn’t necessarily put anyone through to an officer, because we’re out and about. But what it does is allow people access to our voicemail we can access and then we’ll get back to them, as soon as we can. Of course, we’re not an emergency provider like the RCMP are. We encourage people just to leave us a message and we try to get back to them as soon as we can. Some calls take a little more precedence over others. For instance — like a dog complaint, where we’re looking at a vicious dog or something like that — it certainly is going to get addressed quite a bit sooner than other calls,” Stacey explained.

According to Stacey, RRPSS covers the County of Warner, all the way down to Coutts to the border, then back up to just south of Highway 4, and then east to west. “We do cover Magrath, but just the town because it’s not within the County of Warner. But we have that contract, as well, at least until November.”

Statute-wise, Stacey explained, RRPSS deals with bylaw enforcement in the communities of Raymond, Magrath, Stirling, and Milk River. “Coutts and Warner — we don’t do the bylaws in. Some of them are just a little bit different, it just depends on how the contracts work for each individual area.”

“This time of year, we’re pretty busy with our dog complaints. In the summer time, we’re really busy with unsightly bylaw-type stuff in the communities,” she added.

For instance, Stacey noted, the County of Warner loves to see CPOs out on the roads doing a lot of traffic enforcement, whereas other areas love to see CPOs out in the community talking to people about unsightly premises — some communities want presence and some want enforcement. “I’m still getting to know each of those individual areas or what they’re individual preferences are.”

A lot of the things that come up are brought to the attention of RRPSS by community councils, according to Stacey. For instance, an issue in Raymond currently involves motorists parking in disabled stalls in front of the schools, which is especially more prevalent with the cold winter weather.

“When those issues are brought forward, we’ll go and address those issues specifically and focus on those areas of need and then move on until there’s something else that needs to be addressed,” she added.