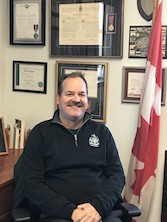 A new Chief Administrative Officer (CAO) has been appointed by the Village of Stirling. At a recent regular council meeting Bob Payette was selected, according to a recent media release from the village. Payette has previously served as the CAO for Thorsby and Irricana in Alberta and most recently in British Columbia for the District of Port Edward.

Combined with prior military service, the media release stated, he has also held a number of senior roles in community services and community development in municipalities including Beaumont and Fort Saskatchewan.

“We are delighted to have someone like Bob with over 20 years of progressive management experience across a broad range of municipal government roles to support our growth plans and other strategic priorities,” said Stirling Mayor Trevor Lewington, in the media release.

“We also wish to express our appreciation to Scott Barton, a Stirling resident who has been working with us as Interim CAO for the last few months and congratulate him on his recent retirement from the Town of Raymond after 29 years of distinguished public service,” he added, in the media release.

Payette noted in the media release he’s been impressed with the level of community engagement in Stirling and the forward-thinking approach of the community’s volunteer organizations and committees. “I am excited to join the team in Stirling and share my municipal government experience in Alberta and British Columbia to help continue the work of positioning the community for the future.”

According to the media release, Payette will begin the relocation process over the next few weeks with his wife Deirdre and commences in his new role effective Apr. 23.

“They do a lot for the community with somewhat limited resources. Our challenge and big priority for the new CAO is to continue to deliver the services and amenities residents expect while minimizing the cost burden on taxpayers. Not an easy balancing act,” Lewington said.