Cutting red tape for good — will Bill 4 be the solution? 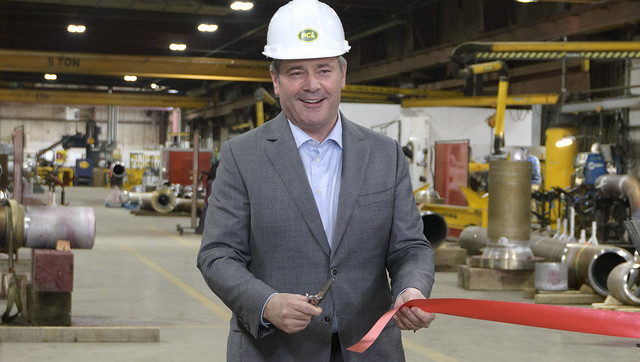 Bill 4 or the Red Tape Reduction Act — the Canadian Federation of Independent Business (CFIB) said — is welcoming news for small business.
“Red tape is time consuming, stressful and ultimately undermines the relationship between government and citizens,” said Richard Truscott, in a recent media release prior to the Government of Alberta’s announcement of Bill 4 on May 29. Truscott is vice-president, CFIB B.C. and Alberta.
Truscott stated the announcement indicates the provincial government is ready to roll their sleeves up, get to work and tackle the issue of excessive regulation in Alberta.
According to the CFIB, each year since 2011 — CFIB has been grading the provinces on regulatory accountability during its annual Red Tape Awareness Week (RTAW). The grade is awarded based on three categories: strong political leadership, comprehensive public measurement and a clear constraints on government rules. “Following a string of bad grades ranging between “F” to “D+” — the recent announcement puts Alberta one step closer to a much higher grade in 2020,” it was stated in a recent media release.
After listening to entrepreneurs, businesses, non-profits and the public sector, Taber-Warner MLA and Associate Minister of Red Tape Reduction Grant Hunter said red tape is an additional burden of doing business in Alberta.
“These extra costs include time, money and other resources,” he said, during the recent announcement via media scrum.
Hunter added the extra costs are driving away jobs and advancement. “Alberta businesses and families end up paying the price.”
Peter Casurella, executive director of the SouthGrow Regional Initiative said SouthGrow is thrilled Hunter is leading the charge of this red tape reduction file. “He really understands agricultural business in southern Alberta is the major driver of our economy and what it needs to really flourish and grow right now.”
“There’s so much opportunity in front of us to do everything we can do to support the growth of the agriculture industry in southern Alberta. It’s just going to increase the province’s efforts overall, to diversify the economy, provide new jobs and growth and southern Alberta could be a huge leader on that,” he added.
Laura Jones, executive vice-president and chief strategic officer of CFIB, said red tape can take many forms. She noted red tape can range from a rule requiring every change on a menu in a bar be approved by the Alberta Gaming, Liquor and Cannabis (AGLC) agency or it could be a complicated government form or it can be the process that comes with a decision on a large project that takes three times as long as it should.
“Red tape creates headaches and stress for citizens and small businesses, red tape raises prices for consumers, red tape reduces employment opportunities and incomes for our children and red tape closes some businesses and stops others from ever opening,” she stated, during the recent announcement.
New research, Jones added, shows red tape increases poverty and income inequality. “The problem is clear — the solution takes political will. The formula for reducing red tape has three essential ingredients,” she said, which include strong political leadership from the top, measurement to ensure accountability and a regulatory budget, cap or reduction target to stop the growth of red tape.
With these ingredients, she noted, British Columbia cut their government rules virtually in half in 2001, while maintaining the important health, safety and environmental outcomes Albertans care about.
“We’re getting really tired of handing out ‘Ds’ and ‘Fs’ on our annual Red Tape Report Card,” she said, as the dismal report rankings have been low for over a decade in the province.
Alberta Premier Jason Kenney said the new United Conservative Party government is “obsessed” with job creation. “Getting Alberta back to work,” he stated, during the recent announcement of Bill 4.
In order to get Albertans back to work, Kenney said the government needs to cut the mountain of red tape holding back job creators.
“We need to go from regulatory paralysis to job creating action and that’s what Bill 4 or the Red Tape Reduction Act is all about. It creates a legislated target for us to reduce the regulatory burden of Alberta’s government by at least one-third. We do so, in part, by following the successful example of the British Columbia model,” Kenney explained, adding his understanding is the current NDP government is not questioning the model adopted.
“We hope this will have unanimous support from all parties in Alberta politics,” he said.
Kenney said Hunter’s job is to go into every other minister’s office and ensure they are keeping pace with the government’s ambitious targets every quarter and every year. “To hit, or exceed the one-third target.”
Hunter, Kenney added, will also be setting up panels with each major area of industry from oil and gas to tourism and hospitality to agriculture and forestry to manufacturing and construction to small business and to non-profits and charities.
“We’re going to have another initiative, the Right To Care Act — which will be specifically about cutting red tape on non-profits and charities, so they’re not encumbered by the same rules created for big businesses, when they’re just trying to help their neighbours,” he added.