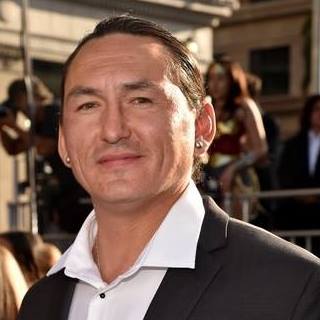 From southern Alberta to the DC Universe, Standoff-born Eugene Brave Rock acquired stunt skills as a performer in “Buffalo Bill’s Wild West Show” at Euro-Disney in Paris, France. This opportunity led to a career in film and television for the Kainai Blood Reserve actor and stuntman. Brave Rock also set up boot camp for Native American stunt performers featured in the Oscar Award-winning film “The Revenant.”

But, it is his role as “The Chief” in “Wonder Woman” that rocketed Brave Rock’s transition to superhero stardom. “I think it’s opened a door to seeing Native Americans as heroes,” he said. “We’re always played as the villain, so it’s nice to see that change and see that happening.”

Brave Rock said he looks forward to future projects coming up, as it seems he’s starting to get more of the aforementioned type of roles now. “It’s about time,” he said, adding there is a Native American struggle that is seen and felt every day. “To see a positive image displayed on television is huge.”

“It’s amazing — the stories that are out there that need to be told. When you talk about reconciliation — I think that’s a start,” he added.

According to Brave Rock, movie-making is similar to going back to one of the oldest traditions — oral storytelling. “This is a contemporary way of pushing our stories out there and making our people proud. Still being able to teach those lessons and values you share.”

Moving forward project-wise, Brave Rock said he is involved with a big project coming up that was pushed back a year. “For me, it gives me more time to technically get ready to do this role,” he noted.

For Brave Rock, appearing at comic conventions and entertainment expos has had an impact on him. His role in “Wonder Woman” has indeed increased his fanbase among film goers and comic and entertainment expo enthusiasts alike. “The feedback from fans or from audience members, to hear the impact I’ve had on them, it really makes me appreciate the work I do is impactful, it’s powerful. I’ve made people cry doing ‘Wonder Woman’ with my opening scene where I speak my language,” he noted.

To get into the comic con lifestyle and to see how impactful it is — a lot of celebrities, no doubt, feel the same way. “You don’t get that connection to your fans or feel the impact of what you’ve done unless you go to these comic cons and you hear their stories,” he said.

Brave Rock shares his thoughts on his culture and tradition with those who ask, but he also likes to share his experiences and the things he’s learned, while travelling. As beautiful and wonderful as southern Alberta is, Brave Rock said it’s nice to travel and learn different things. “Honestly, it’s also very wonderful to learn other ways, other languages and other customs. I try to learn ‘hello’ in every different language I can or ‘thank you.’”

Being in Europe quite a bit, Brave Rock said there’s people that speak five or six different languages. “It’s not uncommon. They speak the language of the land or where they’re at. I think people in North America can learn from that and speak the language of the people whose land they stand on. Again, that’s a form of reconciliation of understanding each other. Language is important.”

Being a Canadian and having a role in a DC comic movie is huge for Canada and for Alberta, according to the actor. “No matter who you are, it shows dreams come true. I’m from southern Alberta. I went to school all over southern Alberta from Cardston to Lethbridge to Fort Macleod and Calgary.”

When Brave Rock thinks of home he visualizes the mountains and landscape southern Alberta has to offer. “When I do go home, it’s amazing. People don’t realize because I think we take things for granted when you see it every day, but when I see those mountains I know I’m home.”

Keep Alberta Rolling is a grass roots non-profit organization created to showcase the benefits and potential of the Alberta screen industry. Its goal is to increase awareness of local success stories in the screen industry and educate Albertans on the vast opportunity the province presents for the creation of jobs, economic diversity and foreign investment.

“It was great to be there. To go back home to Calgary,” Brave Rock said. He added there could always be more happening film-wise in Alberta, especially because of Alberta’s robust cinematic past. Iconic scenes have often been shot in Alberta — from “Superman” to “Legends of the Fall” to “The Revenant.”

“I’d like to see every film filmed there,” he joked. “When I watch ‘The Revenant’ I get cold. I need a blanket. It really captures Alberta.”

One of the keys to Brave Rock’s success is pursuing every opportunity he can, which includes his previous work, as a stuntman. “Those are my stepping stones. That’s what’s brought me to where I’m at today,” he noted.

In the future, Brave Rock looks forward to creating his own visions through directing, writing and/or casting. He said he would like to tell “cool” Alberta stories nobody else knows about. And, there’s many, including one about someone he believes was the last man hung in Alberta.

“It’s a love story kind of thing that turns tragic. He killed a North-West Mounted Police and there was a big chase, a big hunt and they couldn’t find him. At one point he was surrounded by the NWMP and he vanished — even his wife and his teepee, they all vanished. They couldn’t find him and he actually turned himself in. That’s the only reason why they caught him. That’s a great story for southern Alberta,” he explained, adding the historical tale takes place in and around Pincher Creek in the Porcupine Hills.