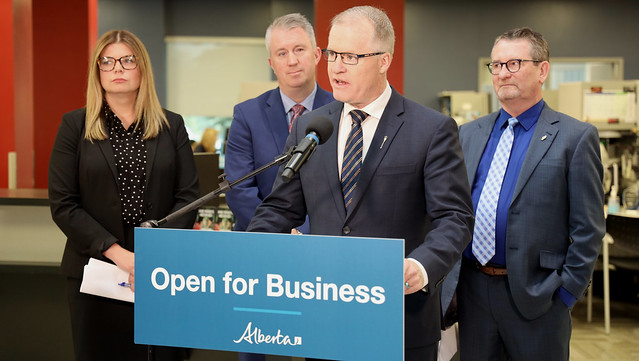 Associate Minister of Red Tape Reduction and Taber-Warner MLA Grant Hunter recently released new initiatives designed to cut red tape, as well as provided an update on red tape reduction successes in the government’s first 100 days.
According to a recent media release, since the Red Tape Reduction Act was passed this spring, the province has made significant progress and cut red tape across government. “The latest initiative, now in effect, allows automobile insurers in Alberta the option of offering drivers a new way to access and provide their proof of automobile insurance — by displaying it on a mobile device,” it was stated in the media release.
“For too long, Albertans have been faced with unnecessary regulatory burdens slowing down Alberta’s economy. We have more work ahead of us, but we are making progress in reaching our goal of cutting red tape by one-third. Together, we are working with Albertans to create more opportunity for businesses and are creating jobs by working towards making Alberta one of the freest and fastest-moving economies in the world,” Hunter stated.
Hunter said the first 100 days were busy for the newly elected government. “When we first launched our website we had 1,400 submissions in the first 36 hours. So there certainly is an appetite out there for this government to get serious about red tape reduction,” he said.
Supported by stakeholders, this latest initiative comes after consultations with provincial insurance companies and allows for greater consumer choice as a safe, efficient and reliable means for Albertans to access their proof of automobile insurance without the hassle of a paper copy, it was noted.

In terms of the digital pink slips, Hunter noted, this is something the insurance industry has been asking for five years. “It was something that just needed some political will.”

“The insurance industry welcomes the government announcement that will allow digital proof of insurance in Alberta. We are supportive of any changes that help make insurance easier and more accessible for Alberta’s three million drivers. Electronic commerce is available in most other sectors and much needed in the insurance sector. Already, many U.S. states and two other provinces allow digital proof of insurance and we anticipate other provinces will follow. We look forward to continuing to work with the government to bring more choice and innovation to Alberta drivers,” stated Celyeste Power, vice-president Western, Insurance Bureau of Canada.

“The Insurance Brokers Association of Alberta is happy to see the announcement the Alberta government is allowing for the electronic delivery of proof of insurance, otherwise known as digital pink cards. Digital pink cards are securely stored on a phone in the custody of the phone’s owner and safely away from thieves if a vehicle is broken into and/or stolen. This is a great step forward,” stated George Hodgson, CEO, Insurance Brokers Association of Alberta.

Insurance companies, according to the media release, will be responsible for creating and providing applications for enabling digital proof of insurance and the timeline for implementation will depend on the insurer. Consumers will be able to continue with the original option of the traditional paper-based system if they prefer.
Red tape reduction actions to date have been a direct and positive result of the passing of the Red Tape Reduction Act. Items of note include:

Feedback and suggestions from Albertans will continue to be accepted online at CutRedTape.Alberta.ca. In addition, the government has launched the first two Red Tape Reduction Industry Panels, which are providing valuable insight into the red tape holding back various sectors of Alberta’s economy.

To date, more than 2,400 submissions have been received on the red tape reduction website at CutRedTape.Alberta.ca.
Ministries are taking inventory and analyzing the regulatory burden imposed on Albertans and businesses, modernizing regulation requirements, processes, forms and policies and eliminating those unnecessary.
The Canadian Federation of Independent Business estimates in 2017, the cost for businesses in Alberta to comply with regulations was about $4.4 billion.

More announcements about red tape reduction initiatives will be made in the coming weeks and months.

“We’re going to reduce regulatory burden by one-third in the next four years. By at least one-third. And the second goal we have is to make sure we’re the lowest compliance cost jurisdiction in North America,” he explained.

Hunter added a government shouldn’t just reduce red tape or regulatory burden just to have a feather in the cap or to check off a box. “You do it because you’re trying to be able to get to and end goal — which is to jumpstart the economy and get Albertans back to work,” he said.

That is why the compliance component is so important, he said.

One of the things Hunter is excited about, in regards to the Westwind Weekly News readership area and the County of Warner, is the consultations the agriculture minister is doing on Bill 6 or the Enhanced Protection For Farm and Ranch Workers Act. “He’s doing a lot of consultations,” Hunter said, adding the agriculture minister was scheduled to visit the area earlier this week.

“We’re excited to have the agriculture minister come down and listen to our farmers and ranchers and get really good consultation on how to be able to move forward with a proper safety act,” he said.