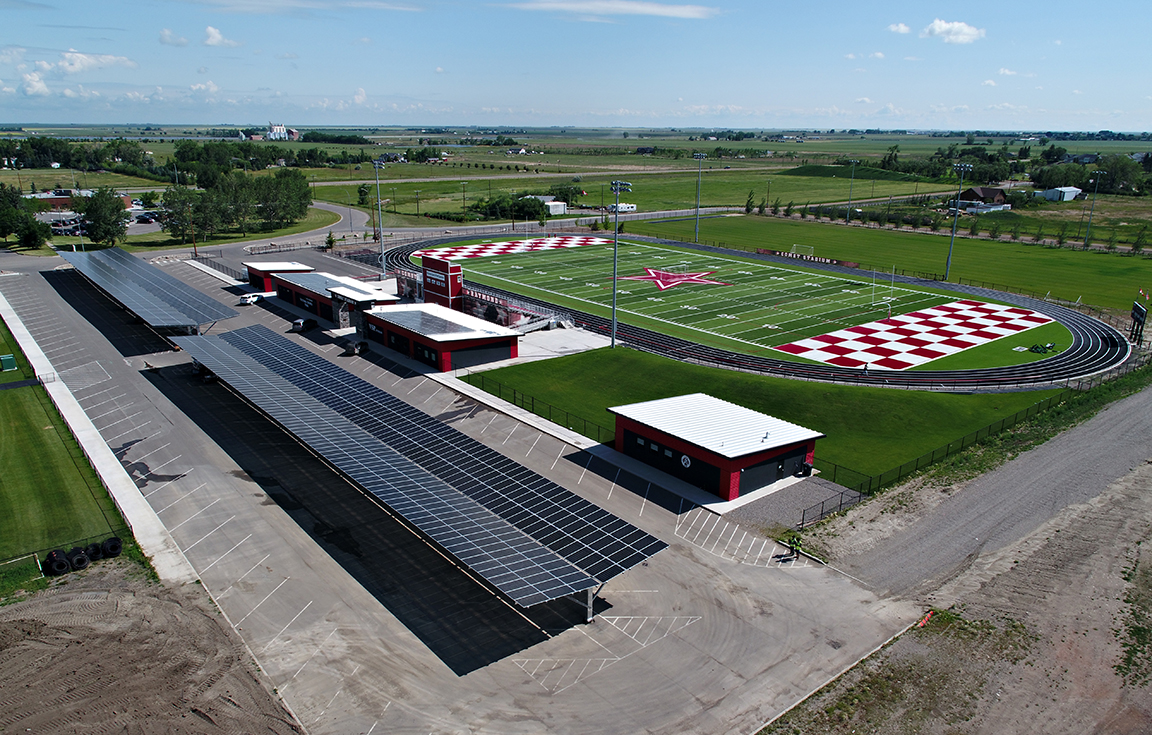 Southern Alberta is a prime location to supply energy from the sun to many communities big and small. The Town of Raymond, nestled close to Lethbridge, Stirling and Magrath is utilizing this fact to transform the energy from the sun to solar power projects town-wide. Raymond is indeed a trend-setter and is a model municipality for other municipalities to look to for guidance moving forward with the utilization of alternative energy.

Greg Robinson, the Town of Raymond’s director of community and economic development, said the town completed their solar project within two phases. “We’ve done Phase One and we completed Phase Two. Phase Two was completed about the end of August. Right now, we’ve got basically one calendar year coming up on most of the Phase One buildings, so we’re still looking at some of the data and of course Phase Two is really fresh,” he explained.

Robinson noted between those two phases of the project – all of Raymond’s municipal buildings including street lighting are powered thanks to solar energy. “Every single thing we pay electricity for, essentially as a town or the municipality itself, will now be covered off with generation of solar electricity.”

With approval for the project in 2017, Robinson said, the town started construction in 2018.

“That kind of went into the end of 2018. Getting those things all in-line. But, what happened is, while we were doing Phase One, the province had relaxed its rules around off-setting your solar to other facilities. We had some issues, for example with our pool. Our pool roof is fairly small compared to what we would need it to be to generate enough electricity to cover all of the pool’s consumption. When we sized that out it was only going to be about a 40 per cent or 50 per cent off-set, so it wouldn’t get us to net-zero. But, at the time, net-zero wasn’t quite our goal,” he said. “We ran into some stumbling blocks there.”

Robinson added the town’s museum and community centre are fairly old and historic buildings. “So, we didn’t really want to get into challenges with them. The roofs would probably need to be replaced at some point anyway. We basically put those on hold and focused on a few other buildings. We were a little bit disappointed with how that started. But that changed through our Phase One, when we could generate an off-set, as long as the town owned all of the buildings – which we do.”

“We can off-set one project to cover consumption on another site,” he said. And that is what the town looked at with expansion with the town’s carport project at Victoria Sports Park, which basically covers off the odds and ends where the town was short – which included the historic buildings, the town’s streetlights and the deficit at the pool.

According to Robinson, the town was able to be a little creative in how to achieve a net-zero goal by covering everything off. “That is where the carport kind of came into play.”

Robinson said the town looked at alternative energy back in 2015/2106 with a solar readiness consultation. “We actually had an assessment done for Raymond.”

“That consultant actually came back and reported back we weren’t really prime for solar, so we kind of shrugged our shoulders,” he said. “So we kind of let that lay low.”
At that time, Cardston was coming in-line with its community centre solar project, which was a partnership with Enmax Energy. The building was just as old as Raymond’s community centre and the town is located within the same geography.

“We scratched our heads and if Cardston can do it, obviously there’s something there,” said Robinson, so the town reached out to Enmax to get a second opinion. Robinson noted Enmax did reviews in early 2018 and in the summer recommended Raymond was a prime location for solar.

Robinson said, at the time, the town accessed 25 per cent for the project from the Municipal Climate Change Action Centre. “They supplied us with a grant.”

Robinson believes the town has fairly high expectations of what the town is generating based on the data the town is seeing now. “I think it’s quite promising,” he said. “We’ve got things engineered the right size, we have the historic data of all the electricity we use and consume and we know what we need to generate.”

“Essentially, it is set up where we’re off-setting the payments for the solar with our consumption charges. Right now, it’s kind of a revenue-neutral proposal, which means it’s not going to cost us any more. But we’re not necessarily saving. It is a long-term solution, once we’ve finalized payment on all of our solar within 15 years. That will add to about $150,000 in savings annually,” Robinson noted.

Raymond also has a charge station at its Town Administration Building, which was provided by Enmax at no charge to the town. “That’s also being powered by our solar project.”

“You can come to Raymond and charge your car up from electricity generated from the sun,” he added.