Solar is the future of southern Alberta 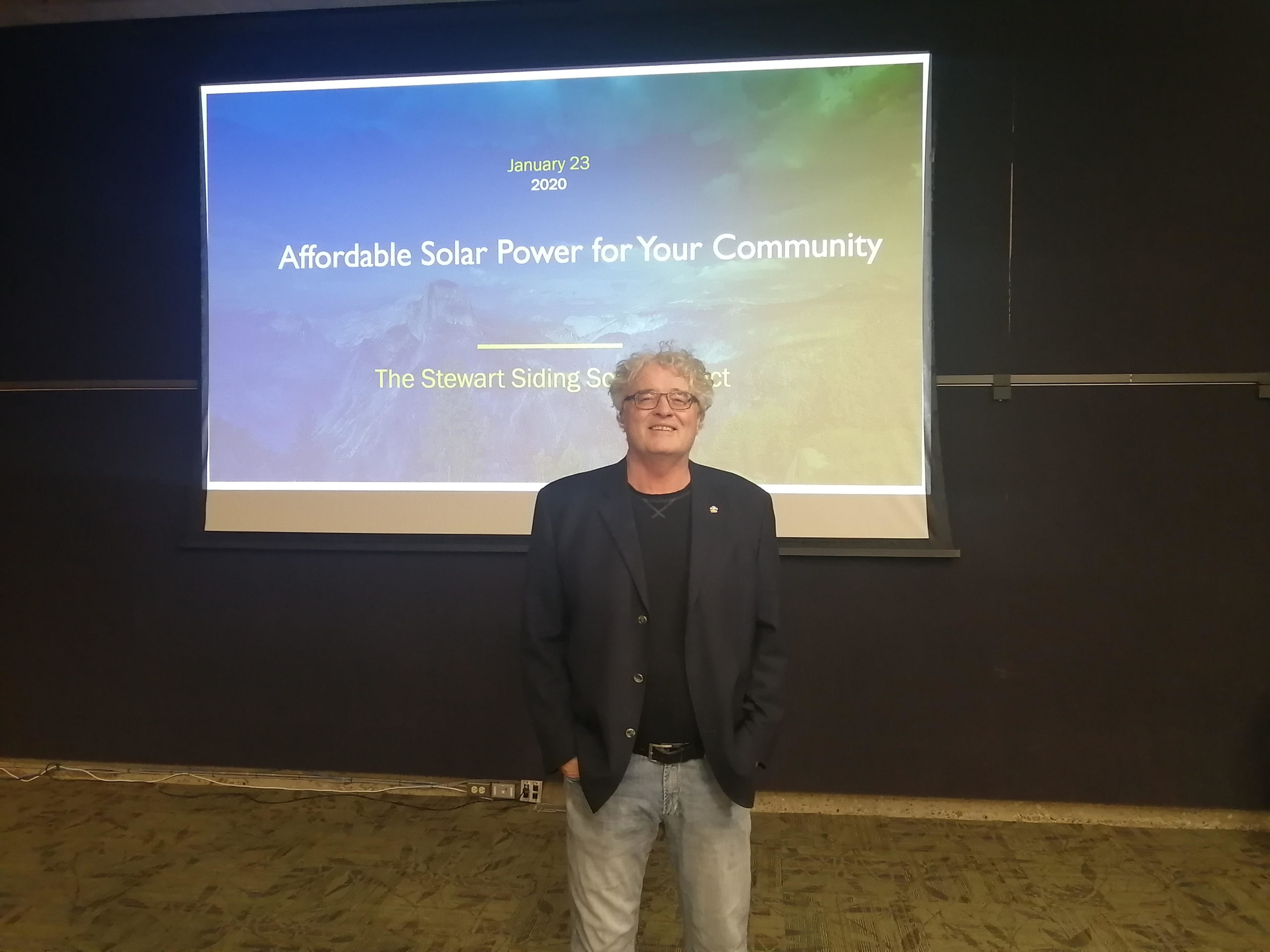 An Open House was held Jan. 23 at the Lethbridge Public Library to provide insight and to help shed light on solar power. The information session on the state of solar energy in Lethbridge County was hosted by 3B Energy, in co-ordination with the county.

Information was shared with the public on several aspects of solar energy including opportunities that exist in the county. A presentation was given by 3B Energy on the Stewart Siding Solar Farm Feasibility Study and Dr. James Byrne from the University of Lethbridge discussed the importance of and opportunities in solar energy. Additionally, the county’s Economic Development Officer Martin Ebel shared the results of the county’s recent Solar Survey. Representatives from Farm Credit Canada (FCC) and MNP also provided insight into renewable energy financing options and taxes.

Ray Ross from 3B Energy said the theme of the Open House was “Affordable Solar Power For Your Community.” The aim of the evening, Ross added, was to inform people, first and foremost, what their options are in terms of solar energy – whether it be for a farm, a home location, a business or whatever it may be.

“3B Energy is a big proponent of helping people understand the importance of green energy and the cost and savings involved when you go that way. We offer free solar assessments if people are interested in doing that,” Ross explained, adding the aim of the Open House was to also integrate other entities from the community.

MNP and FCC discussed loans and taxes and what’s available for people, as Byrne shared some of the up and coming things when it comes to solar in Canada, being a large resource. “Because we have so many sunlight hours here in Alberta,” Ross said. A previous Open House was held in November 2019.

Prior to Ebel’s presentation, the EDO noted the progress of some of the county’s solar and wind projects to date and previous presentations about the subject.

“Six months, when you’re talking about this, isn’t terribly a long time. We do still anticipate some of the larger wind and solar projects we talked about last time will go ahead in 2020. The work we are doing on the Stewart Siding project, we’re looking to see how we could take it further. These things don’t move especially fast sometimes, although when they do move, sometimes they can move quickly. There’s not been terribly much progress, but we’re continuing the dialogue,” Ebel explained.

“We do still see the benefits and we think these open houses are part of that because we know five or 10 or 20 years from now there’s going to be more renewables in southern Alberta. What we want to do is get ahead of that and plan and integrate it into our other economic development. By doing the studies and working on it now, we feel we can be ready for when the floodgates really open, as we start to see more development in this area,” Ebel added.

“One is the Stirling Wind Farm project. It’s actually in both the County of Warner and Lethbridge County. The turbines are about halfway divided between the two. Then there’s going to be two large-scale solar projects in Lethbridge County. One is northeast of the Town of Coaldale and one is about halfway between the Hamlet of Monarch and the Village of Barons. Construction on those is going to all start in 2020,” Ebel said.

Southern Alberta, Ebel said, is an area with a lot of wind. “And certainly we get a lot of sun. We’re one of the sunniest parts of Canada. If renewables like wind and solar are going to take off anywhere in Canada, southern Alberta is going to be a hot spot.”

Prior to the professor’s discussion, Byrne said the idea of the Open House is to bring the message about what renewable energy is going to do for southern Alberta and where it’s going to go. “It’s going to be a very big resource in the future. We also want to bring the message it’s tied to food and into agriculture. Food really is energy. It’s just one continuous circle.”

Byrne’s presentation highlighted how the southern Alberta agriculture system, rural systems and energy system are going to change dramatically on the southern Prairies in the next 20 or 40 years. “As climate change comes on, as the renewable energy transition comes on and as food production gets much more important.”

One future issue is the estimate there’s going to be 10-11 billion people in the world in the next 40 or 50 years, Byrne noted. “Those are certainly concerns we’re going to have to produce a lot of high quality food for our region and for regions around us that need our food production.”

“We’re close to big populations and we’re close to gridlines. There’s a lot of places in the north, but there’s no point putting up wind turbines because there’s nobody to use the power. But down here, we’re right in the middle. We can send power to north, south, east or west. We can bring in power. We are in a great position to really become the heart of a really large regional international food market, energy market and nutrient market. There’s just a lot we can do. I think we have to start to recognize our true potential,” Byrne said.

Renewable energy, Byrne explained, is much cleaner. “I start talking about air pollution first because the World Health Organization says 92 per cent of humanity is subjected to toxic levels of air pollution. That’s something for us to think about. We’re not aware of how much pollution comes out of all our tailpipes and stacks, right here in Alberta. We see the pollution off in Chinese cities or the Asia sub-continent and we think they have a pollution problem. We’ve got it to. We’re getting a lot of pollution problems here. Let’s deal with our air pollution by cleaning up. Renewable energy will give us clean, safe and cost-effective energy and we’re going to be able to sell a lot of it out of southern Alberta.”

“I think we want to let our provincial and federal leaders know we’re in the market and we want to get in and get going with renewable energy,” Byrne added.