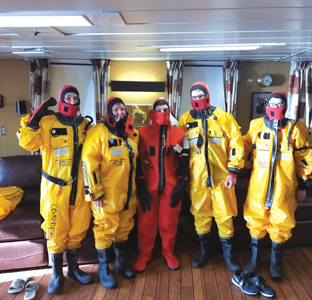 BREAKING THE ICE: CPO2 McCormick along with his three comrades who were selected for the Coast Guard Deployment are fitted with submersible suits before setting seas for the north aboard a Coast Guard Ice Breaker. WWN photo submitted

Raymond youth Mitch McCormick was able to take in a unique opportunity this past summer.

The Canadian Coast Guard Ship deployment is a unique opportunity afforded to only a handful of sea cadets aboard a Coast Guard icebreaker. The ship sailed off the East Coast of Canada in St. John’s, Newfoundland up to the North Arctic Seas from August 1 to August 30, 2019.

Chief Petty Officer 2nd Class Mitch McCormick, a member of 34 Chinook Royal Canadian Sea Cadet Corps located in Lethbridge, Alta., along with his three comrades, had the opportunity to be involved in every part of shipboard operations including operations room watches, upper deck operations, husbandry, cookery, engineering, damage control, safety, etc in a 24/7 watch system. He had the opportunity along with the ships scientist to learn how to measure tides, learn basic welding skills and learn about maintenance of items aboard the ship.

During their time at sea the four cadets including local Sea Cadet CPO2 McCormick’s travel included traveling along the Clyde River with stops around Baffin Island and Nova Zembia Island. They also had the opportunity to spend some time in Pond Inlet and learn the difference between how we live in different provinces from the daily life of the north. Due to his overall success in the program CPO2 McCormick has been selected to attend an international tall ship deployment this spring as he continues to increase his nautical knowledge.

34 Chinook is a Royal Canadian Sea Cadet Corps located in Lethbridge, Alta. Royal Canadian Sea Cadets is a national youth program sponsored by the Department of National Defence and the Navy League of Canada. The program is offered to all youth in Canada aged 12-18 and is provided at zero cost to families. Adults interested in volunteering or youth interested in joining, are encouraged to go to http://www.cadets.gc.ca to find their local unit.