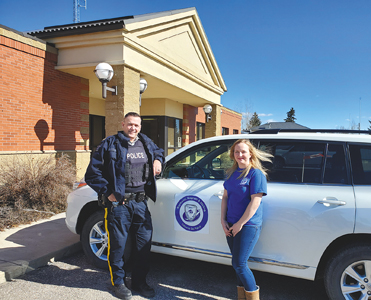 Pursuing a plan of revitalization for the local Raymond, Magrath and Stirling Citizens on Patrol (COP) organization, new president Amy Baker is hoping to regenerate interest in the crime-fighting community group.

“We’re having a bit of reboot here. The whole board is pretty much brand new that we’ve taken on here,” said Baker, who took over the helm in March. “We’re in all three communities. Magrath is currently one of the ones we’re trying to reach the most to get some volunteers in. We still patrol anyway because it’s part of our group. We work under the RCMP — it’s their area, too — and so we try to cover every area that they’re covering.”

Baker explained some of the activities that volunteers are regularly involved in, and the types of roles that are available through COP.

“Typically when you become a member of Citizens on Patrol, we like you to do the patrol side of things. That typically consists of going out, we hope that people can do a minimum of one patrol a month. So you go out for a couple of hours, you drive around the communities. You do the one you’re in if you’re from Magrath, or you can go take in another community, that’s fine, too. We just basically make a note of any suspicious or criminal activity that is going on. If there’s criminal activity happening right away, we contact the RCMP that are on duty and get them out. Otherwise, if we see something that’s just kind of unusual or doesn’t feel right, then we take a note of the things around — vehicles, what’s going on — and then that gets forwarded to active patrol and they can follow up on anything they need to there.”

Sometimes the visibility of the organization’s members is half the battle in preventing a growth in criminal activity in the region, asserts Baker.

“Usually we do that in pairs. No one is alone for safety reasons, and you don’t get out of the vehicles, is what we recommend. And you don’t pursue any kind of criminal activity that might be happening. It’s just an awareness thing. At the same time that we’re doing that, it just becomes more of a deterrent because they see us out — any criminals — and it may prevent them from doing a crime because someone might be watching and will report the crime to the RCMP.”

The Raymond, Magrath and Stirling chapter of COP was founded in 2002, but since taking over Baker wants to get more volunteers to help prevent crime in the region.

“We need to make people more aware that it’s still going, getting some more volunteers. I know for a while it went quiet and people didn’t even know the organization existed. That’s why we’re trying to get a reboot here, and get the towns aware that we are out and patrolling.”

In 2019, the local COP chapter was 12th in Alberta for numbers of patrols, and ninth in the number of volunteer hours, while covering 3,459 kilometers in total. The group’s meetings are usually the last Wednesday of the month at 7 p.m. in the old council chambers in Raymond. The public is welcome, but those interested in attending need to sign a confidentiality waiver.

“If people are interested and want to know more, they’re welcome to join those meetings, and I can discuss it a little bit more. We do have a Facebook page, and we do have a website that’s currently in progress. It will be in the next couple of weeks here.”

Although Baker says crime rates have dropped recently in Raymond, there are still problems.

“I know we have a lot theft from vehicles, and property break ins. There’s always the vehicles that we report for suspicious activity, that happens a lot. Even if there’s a concern that something seems unusual, definitely contact the RCMP.”

People should report anything of the ordinary, says Baker.

“It also helps us at COP then because we know the areas that are being targeted, and areas that we need to keep an extra eye on, and listen and help.”

While COP volunteers are always welcome, the organization is also seeking financial assistance from the public in form of donations or contributions.

“We absolutely do. It’s all donation based. We do receive assistance from a couple of the towns — or we have in the past, anyway — and that seems to be the basis. But we also assist with things like the rodeo here in town (Raymond) and the tractor pull that’s coming up, and we receive donations from the organizations,” said Baker.

Those interested in volunteering with the local COP chapter or providing financial assistance can stop by the Raymond/Magrath RCMP detachment office in Raymond, or can contact Baker directly at 403-681-6446 or via email at contact@rmscop.ca. An application form can be found on the organization’s Facebook page.