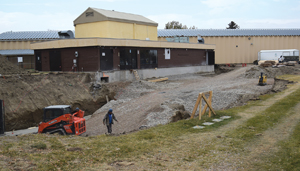 Process is continuing on the new Magrath community pool.

After they received an update on the pool during their regular Oct. 13 meeting, CAO James Suffredine reported that town council was “happy” with the process being made by the pool contractor.

Time lapse videos of the contraction are available on the town’s website and Facebook as they become available for those interested in it’s process. Construction on the pool had started this fall.

The new pool has an estimated final cost of $1.8 million. As of early September, the town has $1,475,000 in committed funding for the pool, and the Magrath and District Recreation Committee and the town announced they had received a $472,500 grant for the pool through the Community Facility Enhancement Program (CFEP) back in March. The town’s annual charity golf tournament held on Sept. 11 had proceeds going to the new pool.

During their meeting, Magrath town council had passed a motion to consolidate our current pool funds into a new account to allow for easier record keeping purposes and interest rate.

The town is focussing raising funds for the actual pool itself, before looking at extra add-ons such as water spray features, a climbing wall and seating.

“No further extras are currently being considered other than all of the new features that are included in the plan. Our primary focus is to be able to fully fund the new pool and waterslides as shown in the concept drawing that was shown to the town’s residents in the summer,” said Suffredine.