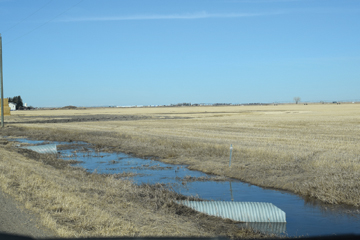 With the weather warming after a winter of highs and lows, local counties are cautioning their residents to stay vigilant on overland flooding.

“Overland flooding can cause a lot of damage to crops; if in the ground, it can also cause erosion damage. Depending on the placement of structures, they may also have water damage,” said Murray Millward, CAO for Cardston County. “Overland flooding usually occurs when we get a heavy rainstorm, while there is still snow on the ground. The combination of snow and rain results in the snow melting faster and adding to the moisture, which can overload the drainage courses causing water to back up into fields and low spots.”

Overland flooding occurs when bodies of fresh water overflow onto dry land, and is typically caused by two different events; rainfall or snowmelt, which present different challenges in terms of preparation and damages. Frozen ground can hamper its ability to absorb water in the springtime, while in the summer, excessive amounts of rainfall can cause overland flooding events. The potential for localized flooding varies each year.

Jamie Anderson, director of Emergency Management and safety co-ordinator for Warner County, pointed to the spring of 2018 as an example of widespread overland flooding across much of southern Alberta that saw significant infrastructure damage.

“The onset of flooding conditions can come on very quickly and flash flooding overland is a very real possibility. People need to be keenly aware of this because of the variety of potential impacts seen,” said Anderson. “The 2018 flooding saw significant infrastructure damage, both municipally with the damage of culvert systems, road bases and ditch drainage systems to name a few examples and personally with the flooding of homes and farms. Dependent on the depth and flow of the water, we look at a range of risk that includes personal injury, up to and including the possibility of drowning. We look at the impact on farmland and livestock, as well as previously mentioned, the impact upon critical infrastructure.”

Warner County’s Municipal Emergency Response Plan classifies the hazard of flooding due to rainfall and run-off in the “very high” risk category with a frequency rating of “likely,” with area of high impact monitored throughout the year.

While there have been a few storms this past winter in southern Alberta, actual precipitation hasn’t been high. According to Environment Canada, mountain snowpack run-off is relatively normal with a typical run-off is expected, but weather conditions can change quickly.

“This is southern Alberta, so we could get a dump of snow anytime, then a rain shower right after, but right now, it does not look like a high-risk for this year,” said Millward.

The biggest sign of an area at-risk of overland flooding is excessive water running by a property and significant pooling in areas of potential risk is the biggest sign of an overland flooding event. Those areas will usually have a history of flooding. In a hamlet, which has infrastructure that often includes storm drains and master drainage plans, where water goes to outfall areas outside of the hamlet, during a flooding event the streets will flow heavily and the water will travel to catchments outside of the hamlet.

To help protect property, ensure water flows away from any buildings and ensure natural drainage can flow freely. If a culvert is plugged, contact the county about it.

If you come across a road that is flooded, contact the the local county and do not try and go through or cross the affected roadway in question, as flooding can cause unpredictable road deterioration that is not predictable. Crews will barricade road and assess the situation to determine the best course to fix the problem, with Millward noting sometimes, it just needs time to drain by itself.

“The power of water can be deceiving, it is very easy for a vehicle or an individual to lose stable ground, where flowing water is concerned, either overland or along waterways and their banks. You absolutely don’t want to find yourself in that situation,” said Anderson.

Those faced with an emergency situation should call 9-1-1.

The Cardston County Office can be reached at 403-653-4977. For flooded roads, contact the Operations Department.

The Warner County Office can be reached at 403-642-3635. For flooded roads, contact the Public Works department.