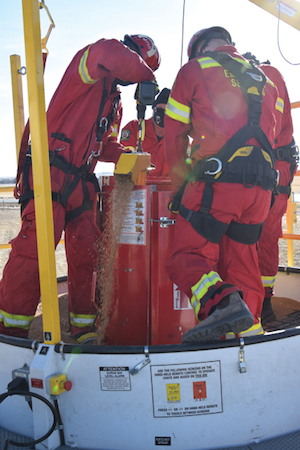 The Magrath Fire Department, in conjunction with the Canadian Agricultural Safety Association, Alberta Wheat and various other partners and sponsors, hosted a grain bin rescue course just outside of the Town of Magrath on Saturday, March 20. The all-day event saw groups of firefighters from Magrath, Cardston and the Blood Tribe learn how to safely extract someone trapped in grain.

A special safety trailer travels around to different communities and offers firefighters a hands-on training experience on extracting someone trapped in grain safely.

Sean Stanford, a captain with the Magrath Fire Department who owned the farm where the training took place, called the exercise a great opportunity, and they were able to take advantage of funding from the Alberta Wheat Commission to put on the training program.

People can get trapped in grain bins in many different ways, such as going into a clear grain bin and getting stuck on the side of the bin — only for it to collapse on top of you or falling through a hard crust of grain on top after going into a bin.

The grain compresses against the body, making it hard to move and, depending on how high it goes up a body, breathe.

While Gary says they do not recommend anyone goes inside of a grain bin while it’s full, he noted “sometimes things happen beyond our control,” so while they stress safety and do outreach, there must be a way to rescue someone if they become trapped, adding the same principles apply if someone gets buried in dirt in a trench.

For the course’s instructor Tom Littlechild, regional technical advisor of community and technical support for Municipal Affairs and on the Siksika First Nations fire department, grain safety is personal.

Having grown up on a farm, his father had got trapped in a grain bin up to his chest.

“Back then, we didn’t have any of this stuff we have here. Luckily, we did get him out, and we were very fortunate the grain bins that we did have back then were (smaller),” said Littlechild. “We got lucky, let’s put it that way.”

Cliff Blackwell, fire chief for Magrath Emergency Services, had acted as an entrapped person during the training exercise, and said he found once he was buried up to midthigh, he was unable to move and could no longer get out by himself.

Stanford noted it was an interesting experience to see it happen to someone in real-life, as opposed to a video.

“I’ve see training videos of it before, but to actually see it in-person is a little different,” said Stanford.

To extract someone safely from the grain, the departments’tag out and lock out all electrical components to ensure nothing turns on while in the bin, and place platforms on top of the grain to move around on before checking out the entrapped person and getting them into a harness.

At that point, if the person is still conscious, they can usually climb out by themselves, and if they’re unconscious, they’re extracted by the department.

Training exercises like this help the Magrath Fire Department respond to and assist those living in more rural areas. “There are a lot of hazards and dangers of working on a farm,” said Blackwell.

“We’re grateful our farmers are very conscious and very careful. However, we’re also grateful we have companies like this and (BeGrainSafe) and the Canadian Agricultural Safety Association, Alberta Wheat and (others), that have come in and given us the ability to come in and get the training that can help in an emergency like this.”

While grain entrapments are not a common call, Blackwell said it was better to train for the extreme case.

He noted he had recently talked to someone whose son had got caught in the sweep in a grain bin, noting it happens more often than you know of, and they need to be prepared in case someone needs rescuing. When working around a grain bin and have to go in, ensure all electrical equipment is tagged out and locked out — so nothing starts up if you are in a bin, and most importantly, never work alone.

“There’s a lot of grain bin entrapments, more than people know, it’s quite a common occurrence unfortunately across North America.

“The biggest way to avoid it or prevent it from happening is working with somebody else, but unfortunately — I get it, I grew up on a farm — there’s a lot of people who do farm out here, they’re out there by themselves and when they’re by themselves, when incidents occur, and unfortunately, that’s when people don’t know that something happened,” said Littlechild.

“The best way to prevent it is to be working as a team, or letting somebody know what you’re doing.”

In 2015, there were some fatal accidents involving farmers and grain bins, including three children who died after getting caught in a grain trailer.

After that, farming associations began discussing what can be done to help promote and improve safety around grain.

CASA’s BeGrainSafe program was created in response to the rise in grain entrapment fatalities, and since 2017, has promoted grain safety with displays, demonstrations, producer education and firefighter training. The trailer, with a built-in silo that can hold 7,000 pounds of grain, has been used to demonstrate grain entrapment and to help train firefighters.