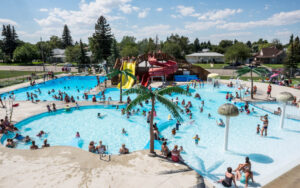 Photo from Town of Raymond

The Raymond community pool will be open for the 2021 swimming season with restrictions.

During a regular May 18 meeting, Raymond town council discussed opening the community pool for 2021.

CAO Kurtis Pratt said the town had previously discussed this and wanted to wait a bit to see where the province was with public health restrictions.

“I honestly don’t know if I can say we have a clearer perspective of what may be occurring this summer,” said Pratt. “However — and fool me once, fool me twice — but I’m optimistic as we get going throughout the rest of the summer, the momentum will be such we can start downhill on this process for good. That being said, these recommendations are based on restrictions, as they are today.”

The recommendations, put together by the town’s Fitness and Events Co-ordinator Karen Wilde, presented restrictions — as they currently stand, as of the council meeting. If restrictions become more stringent during the summer, the town will need to reassess them, but if they become further relaxed, the town can go forward with them.

Some of the recommendations include: Creating slot times that are booked and paid for online 24 hours in advance Setting limits on the amount of people allowed per swim time Having contactless check-in with QR codes users can have on their phones or print out to scan Closing the change and locker rooms Not having season passes this year Having only family change bathrooms open to reduce amount of cleaning between swim times Having 30-minute periods between swim times to allow for cleaning While it is unlikely swimming lessons take place, if there is an interest for it, the town can look into scheduling times specifically for lane swim.

Pratt noted under this structure, with one-hour swim times five times a day with 80 people in each slot being charged $2/person, they would be able to cover wages for the three lifeguards on deck, one guard inside and one staff member at the front desk.

Pratt noted while the town normally hires up to 24 life guards, there just isn’t a need for that many this year.

However, the town does need to think long-term, so the town will need a good mix for training and transition for next year. He also noted Lethbridge opened a new pool on its west side and have pulled lifeguards from neighbouring communities, so the town “has to work through that.”

“Just to provide some opposition, there is no business case in the world that’ll say this makes sense,” said Pratt. “However, that’s not the necessary motivating factor.”

Pratt pointed out pools were costly to run before the pandemic and the town had budgeted for running the pool this year, but it was up to council to decide if it wanted to open it for the summer.

When asked what the numbers were based on, Pratt said while he wasn’t 100 per cent sure, he believed it was based on fire occupancy, and as the town also had to keep in mind the number of bodies in the pool, some calculations were done with the pool’s square footage, so it was likely a mixture of both. He believed with 50-200 swimmers, the pool could function with 12-14 life guards. Coun. Joan Harker said it was important to know, as she had heard from people thinking it was one thing — but it was actually the fire occupancy rate.

Noting opening their garden centres allowed for more people in a store, she asked if they could expand the area for the pool to allow for more people. Pratt said it was something they could consider working with their health inspector on, although he noted when a store does it, it’s typically an annual thing.

“In the end, we’re not opposed to anything, we’re just trying to work within the confines of the legislation, which we saw with our drive-in,” said Pratt. “We definitely want to have as many people to articulate as we can, but at the same time, as a municipal organization, we are a creature of the province, and we don’t want to win a fight to lose a battle, or to lose the war in this sense. We need a good working relationship with the province on a number of areas, and is this the site we want to pick the hill to die on? “Hopefully, we can get going, and as the summer progresses — things can release and get less restrictive and we can accommodate more numbers, but we have a challenge with the number of guards we have. We don’t want to hire 20 lifeguards and not be able to give them sufficient hours.”

When asked how far back the town can push the decision date on the pool, Pratt said the town needed to get the pool facility cleaned and ready to go and get Alberta Health Services approval. AHS is also using the area for COVID-19 testing right now, so AHS would need to give the town time to transition to the ice arena for the remainder of the summer. If the town has a targeted opening date of June 30, it would give the town a month-and-a-half to prepare. Pushing it any further would be very tight. Coun. Stewart Foss voiced support for the pool opening noting there is never a business case for a pool, which Harker agreed with, saying their’s was a mental health case.

“We need to try and get the residents of our town a little bit of a bright spot to move forward to, because really, there is just not one right now,” said Harker. “Anything we can do I think is (good), there’s a case for this.”

Council passed a motion to begin preparing the pool for a June 30 opening date.