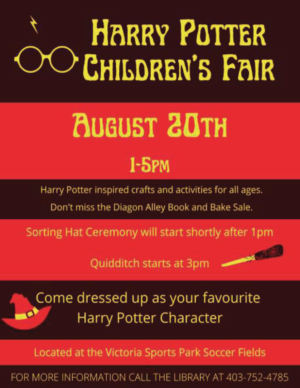 The world of Hogwarts is coming to Raymond. The Raymond Public Library will be holding a Harry Potter Children’s Fair on Friday.

The event, held at the Victoria Sports Park and open to everyone, will mark the end of their summer activities. “We thought it would be a fun activity to wind up our summer reading program,” said Faye Geddes, library manager. “We’re doing the ending party a little different this year. ”

“Just wanted to shake things up and try something new.”

Geddes said they had done a Harry Potter day in 2019 at the library, which was well received by the community.

“It was so well received and we had so much fun planning it, we decided to do a children’s fair, kind of make it a little bigger then before.”

The fair will feature activities such as craft tables for wands, broom handle, potions and house bookmarks and a Pin-the-Nose-on-Voldemort game.

Attendees will also be transported to Diagon Alley, with a Book and Bake sale put on by the Friends of the Library. Kona Ice will be there, featuring flavours inspired by the world of Harry Potter.

The event will end with Quidditch, with Geddes saying they’ll be making broom handles during the day for the game, following which the library will present awards from their summer reading program.

Reimer Renovations have donated a bike, helmet and bike lock for a prize draw for those who participated in any of the library’s summer programs.

The Subway Reading Challenge – which had sponsored the library for the summer and had been handing out $10 gift certificates every week for Subway all summer – will be drawing for their final prize, a $25 gift certificate to Subway.

Attendees are welcomed to come dressed as their favourite Harry Potter charters. The Harry Potter Children’s Fair will go Friday, Aug. 20, from 1-5 p.m., at the Victoria Sports Park in Raymond.