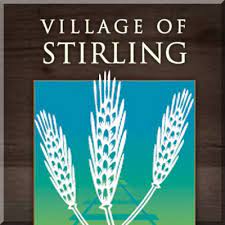 The following are selected briefs from the Feb. 2 Stirling village council meeting:

Stirling council accepted a comparison report on the village kiosk’s energy consumption for information. The report was commissioned following the Light up Stirling event in December last year, hosted by the Village Community Events Committee, which saw the tourism kiosk on the corner of 4th Ave and Hwy 846 lit up for the month. Coun. Devynn Bohn, at a previous meeting, had expressed interest in learning about the cost of the electrical consumption for the hundreds of lights that made up the month-long display.
The cost of electricity for the month at that location was $8, plus the cost of transmission and distribution. Mayor Trevor Lewington noted that the village had “received many compliments on the event and the subsequent ‘Griswold’ look of the lit-up kiosk”, and the low cost showed how efficient hundreds of LED lights can be. Council also thought that the cost of the light display was “a good investment of community spirit”.

Council confirmed recommendations made by administration over what sections of road should be done in what sequence in the village’s 2022 Road Oiling Program. The rehabilitation of unpaved roads will take place in the summer, and the remaining sections that are not yet complete under the current program will take three more years to complete. Sections will be prioritized based on impact on residents.
HS01-22 Health and Safety Policy
Council approved a new Health and Safety policy for the village. The new policy replaces an older document, and brings some older documents into consistent formatting to ensure it meets current legal requirements.

Council approved a policy to support local artists. The policy allows for local artists to display their artworks at the village office for sale, with the office selling the art and remitting payments to the local artist. The policy was brought forward as a creative community development idea by the village CAO, Scott Donselaar.
“The program would ensure the office has art and is a visually appealing workspace while at the same time help to promote local artisans and their work,” said Lewington. “The policy helps to set out the rules for how the program will work and allow the office team to move forward.”

Council accepted Lewington’s report on a Stirling School Modernization meeting as information. The $15 million school modernization had been completed in 2019, and the report was an update from when Lewington met with members of the former School Modernization Committee and representatives from the Westwind School Division, with discussion centered around topics such as formal recognition of key community donors, status of donations made via payment plans and final costs of the project.

Council accepted a piece of correspondence from the provincial government on an EMS Pressure and Mitigation Plan Memo as information. It had discussed their 10-point plan to improve EMS service and ambulance availability across the province.
Lewington said after the council meeting, he had attended a regional Mayor’s and Reeves meeting on Feb. 4, that was attended virtually by Alberta’s Minister of Health and the Chief Paramedic to discuss the plan.
“Stirling relies on ambulances dispatched from other communities as we do not have one of our own. The closest ambulance is based in Raymond but when that one is tied up, Stirling is served by ambulances service from Coaldale and Lethbridge. Our local volunteer fire department runs a medical first response program to provide local service to bridge the gap when dispatch times are longer than desired or when units are coming from further away. As you know, in a medical emergency – every second counts. The province has acknowledged that there are concerns and is working to try and improve the system,” said Lewington.
Council had discussed issues that have persisted since Alberta Health Services took over ambulance service almost 10 years ago, with Lewington stressing that this is not a new problem, and “successive governments have failed to make it better”.