Cheering all the way to Provincials

Posted on February 5, 2015 by Westwind Weekly 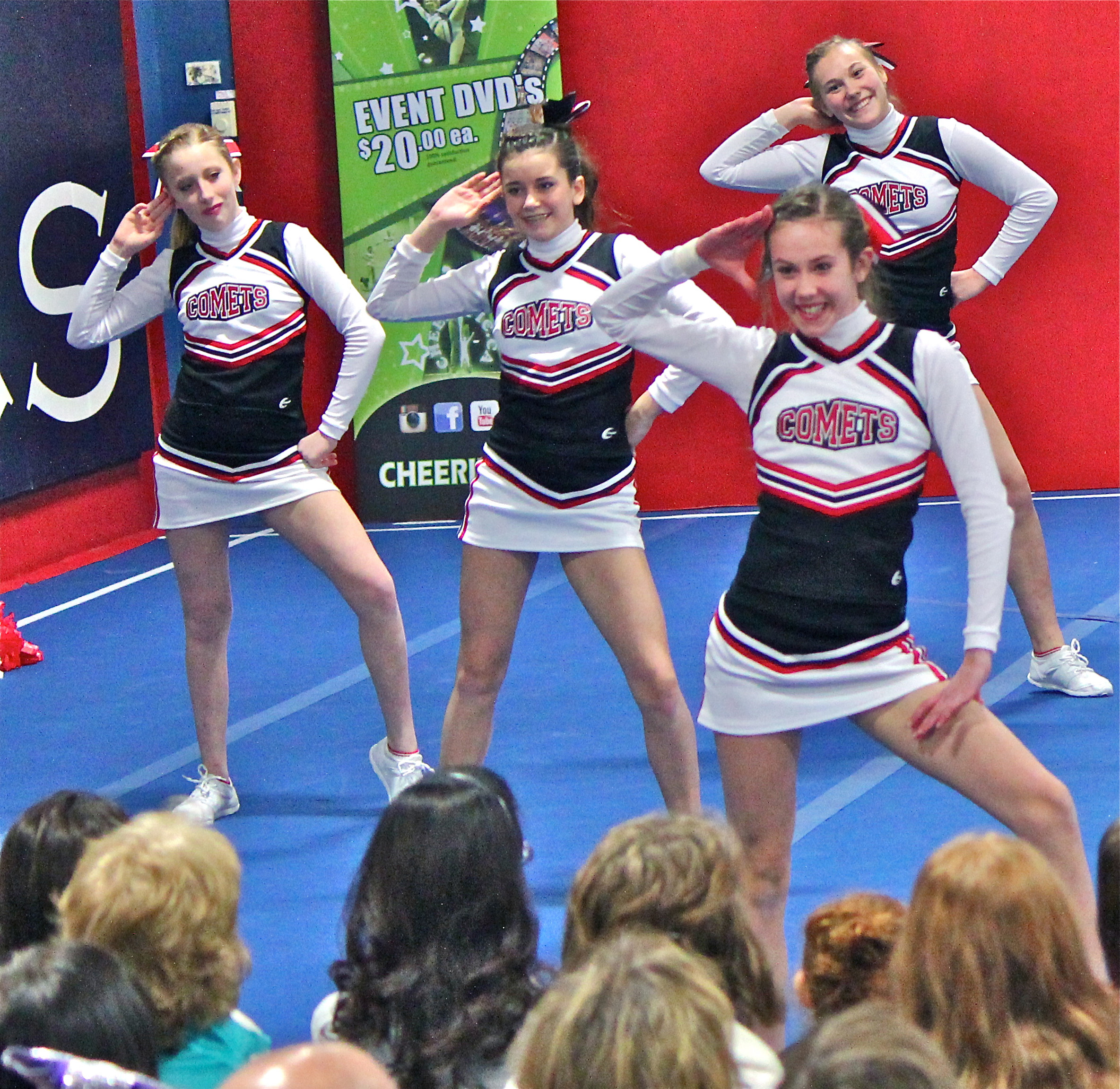 There’s no doubt Westwind School Division is crazy about basketball. There’s one reality, however, that opens another door for young athletes at Raymond Junior High.
Our basketball in southern Alberta is amazing, but it can’t accommodate everybody,” says Debbie Salmon. “So it’s nice to offer another program that allows more kids to be involved in their school and get all those youth sports benefits like building self-confidence and self-esteem, setting goals and accomplishing goals, and getting better at their craft.”
Salmon and Shannon Evans are parent-volunteers and co-coaches of the RJHS Cheer Squad. The team – which consists of 15 girls in Grades 7 through 9 – is now in its second year. After performing at home basketball games, rallies and any other opportunity to showcase the hard work they’ve put in, the squad took part in its first-ever competition this past weekend.
The school competed in the Junior High Cheer Zones in Lethbridge with the hopes of a top-three finish to qualify the squad for provincials in Edmonton in March. A two and a half minute routine at West Wind Gymnastics Club saw RJHS place second in their division.
Competition allows a means for the cheer squad to measure its progress. Salmon says they can’t lose sight of their first priority, however, which is to promote school spirit, ramp up the excitement level in the gym and in turn help the athletes on the court elevate their game.
The cheer squad practices two to three times a week and really put in a lot of work in the past month or so to learn the stunts and the routine. Salmon has been impressed with how far they’ve come in a short amount of time.
“I understand (cheerleading) hasn’t been in the area for 20 years or so, so it was hard for these girls to even understand what they were supposed to do,” she says.
The squad did have opportunities to watch the Cardston High School cheerleaders in action and benefits from the fact several of the girls have dance backgrounds.
Their coaches also bring a wealth of experience with them. Salmon was a high school cheerleader in California, earned a Minor in Dance at BYU, toured internationally and has coached dance at both the community and professional-level. Evans was cheer captain at Cardston High School and both are certified coaches with the Alberta Cheer Association.
With daughters attending RJHS they thought it was an opportunity to re-introduce cheerleading locally. Principal Cory Bevans was quick to support the program.
This just gives another place for a student to hang their hat; something to build their self-esteem and say ‘you know what? I am part of something, I am important and this is important to me,’ ” he says, adding that self-confidence shows in the classroom and in everyday life. “It would be ideal for me if I was able to have every kid in the school interested and involved in something in the school outside of the classroom.”
The coaches apparently made enough of an impression that girls returned for a second year and new ones joined in. The future looks bright, with more than 50 girls taking part in an elementary cheer camp the squad put on as a fundraiser. Salmon’s daughter in Grade 6 has apparently already begun recruiting friends for next year.
There may also be opportunities to expand the program in the future. Although there’s currently no cheer squad at Raymond High, Evans has a daughter who will graduate from Grade 9 this year.
Cheerleading was a way of life for teenaged girls in Salmon’s hometown of Bakersfield but she says they need to take things here one step at a time.
We don’t need to be taking over the world. We don’t need to be changing everyone’s perspective,” she says. “We just want people to have an open mind and see the good these girls are doing for the school and for themselves.”