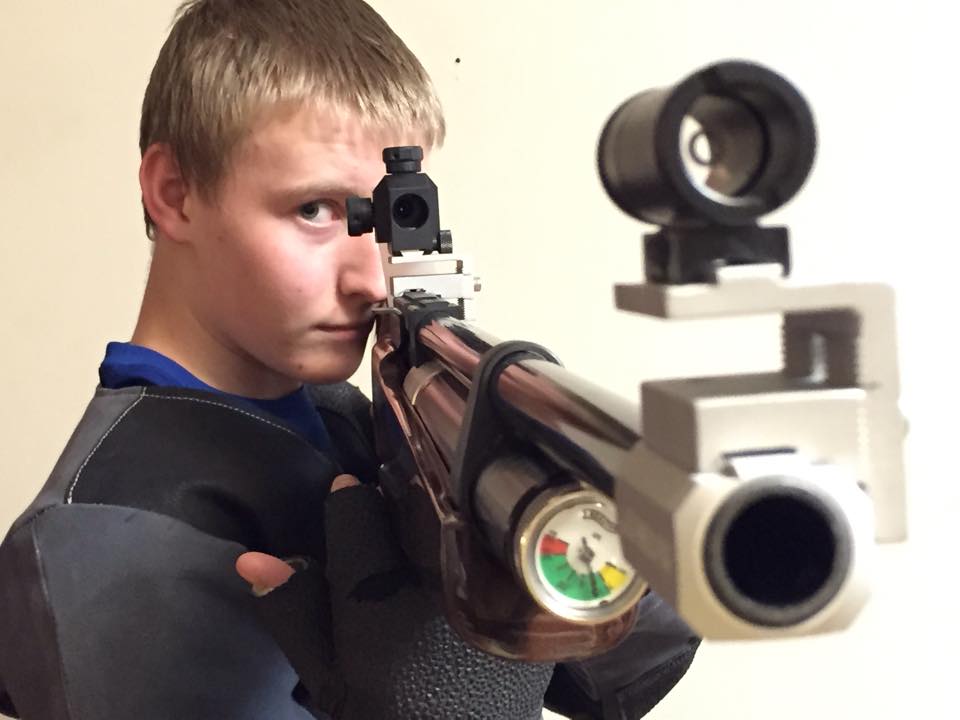 A natural ability, passion for shooting and the desire to continually improve and learn has earned Brandon Hardy a place in the Canada Winter Games. He will be competing in the Target Shooting- Air Rifle category.
Perhaps what is most impressive about the seventeen-year-old’s accomplishment is the fact that he first picked up a 22 only two-and-a-half years ago during the Southern Alberta Summer Games.
“I just loved competing after that, because I thought I was pretty good at it,” shared Hardy about the silver and two bronze medals he took home in his first competition.
Susan Eymann, who is currently his coach, was there scoring the targets and noticed his talents and invited him to check out the LA HotShot Club, a group of 40 recreational and competitive air gun enthusiast.
“He just loved to shoot, there was no hesitation or nervousness … It is like the rifle is an extension of him,” shared Eymann of her first impression back in 2012.
Shortly thereafter, Hardy started training three times a week for competitive air rifle shooting in Lethbridge and Coaldale, under Eymann’s instruction, and the rest is history.
Brandon recently earned the title of the number one male open air rifle champion in Alberta. He is the best shooting male in the province.
While the sport isn’t very well known in Canada, it is very popular in Europe and Asia, said Eymann. She noted it is growing in Canada, Alberta particularly, and that there are about 25 competitive air rifle athletes in the province.
“It is a challenge (to get people interested), part of it is the culture. Air rifles are guns, so you have to educate a person that it is a very precise Olympic sport. And when people come and try it out they absolutely love it.”
According to Hardy his biggest strength is the advantage he had coming into the sport, already knowing how to hold, shoot and aim a gun from years of prior hunting experience.
Eymann noted that Brandon’s calm demeanour on the line is crucial to his success, as he is alone on the line for over an hour. “He is able to focus in and stay focused for that long of a period. Which, is pretty remarkable for a teenager,” said Eymann with a smile.
Target shooting tests an athlete’s accuracy, speed and endurance. From a distance of 10-meters, the competitor has an hour and 15 minutes to fire off 60 shots. The black bullseye is an inch and a half in diameter. The 10 in the centre of the bullseye is the size of a pin head.
Three weeks ago, Brandon scored a new personal best of 606.9, and is hoping to add to that at the Winter Games in Prince George, B.C. For men the perfect score is 654. A perfect shot value for each bullet is 10.9.
One of Brandon’s favourite things about the sport is its individual nature. “I can’t blame anyone for the mistakes. It teaches you to figure out what happened, why and how to fix it. It teaches you to adapt and strategize.”
The biggest factor of whether or not an athlete succeeds is themselves and their ability to remain calm and still during the competition.
Leading up to the Canada Winter Games, the primary focus has been mental training, as Hardy admits his weakness is dealing with pressure and that the Games will bring extra pressures, being his largest competition to date.
Eymann said that she has been working with him to be confident, no matter what happens, and not get flustered. To do this they have been setting up high-pressure scenarios in practice to try and mimic some of the things he may face.
Technically they have been working towards a better understanding of “is it me or is it the rifle” and knowing when to change the site of the gun or body positioning to more accurately hit the center of the target consistently.
Those who want to watch Brandon suit up on Feb. 16 in the Men’s Team Air Rifle category and Feb. 18 in the Individual category can view a live webcast at the following link: http://sportscanada.tv/canadagames/index.php/week1/target-shooting
Anyone interested in trying the sport for themselves is invited to the open drop in night at the Coaldale Sportsplex on Wednesday’s from 7 – 8:30p.m.
It is free to try for the first time and is a family friendly sport for people of all ages. For more information Susan Eymann can be contacted at 403-315-1585.