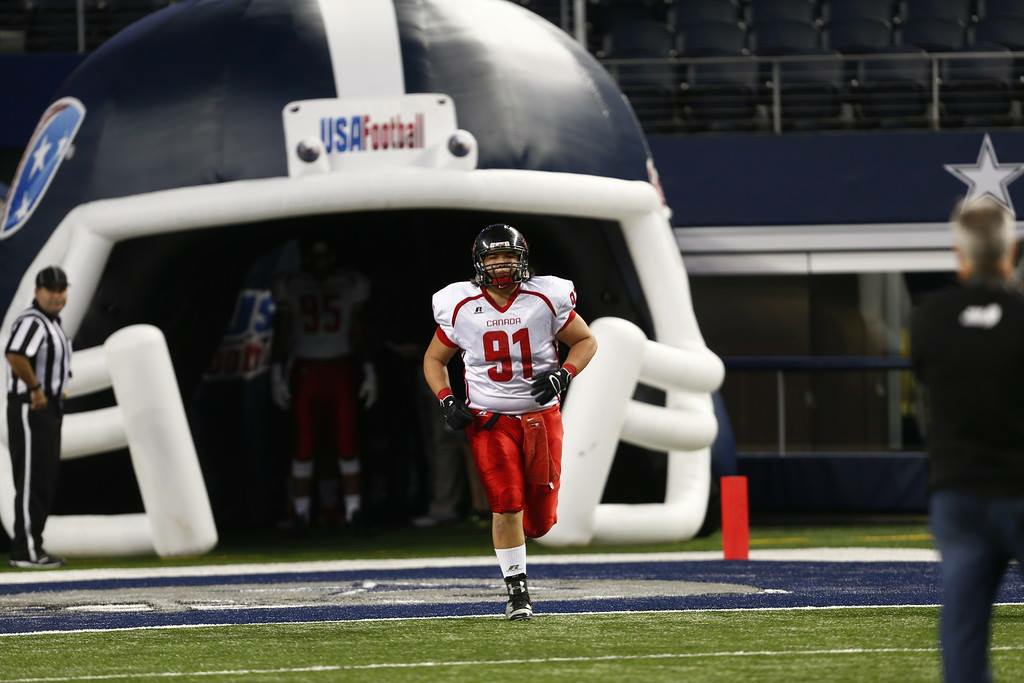 Earlier this year, Bobby Sugai, of Raymond, realized his boyhood dream of playing football in the Dallas Cowboy Stadium. He was part of the Under-18 Team Canada squad competing in the International Bowl series in Arlington, Texas.
“It was overwhelming, the stadium is huge and the atmosphere is great. Being there with all the fans was amazing. It was easily the best thing I’ve ever done so far,” said Bobby of his International Bowl experience.
In its second year, the International Bowl series took place between Jan. 30 and Feb. 7. It brought the top student athlete football players from Canada and the United States together.
This included the 6’2” 268 pound grade 12 Raymond High School student. Sugai started to play football at age nine, including five seasons with the Comets. He also had several All Star Team appearances under his belt, including two consecutive Team Alberta appearances at the Canada Cup.
Sugai typically trains six days a week, looking up to retired NFL player Ray Lewis.
“He is the hardest working football player I know. I try to be that myself. He is so intense and an emotional leader.”
Everyone that was selected for Team Canada at the International Bowl played at the Canada Cup, explained Bobby. As a repeat player, the scouts already knew his game style and strengths on the field.
“I’m a very physical old fashion player, but not only that, I also have the ability to read plays and put myself in the best position to give myself a greater advantage. All that coupled with a burning desire to compete and be the absolute best player I can be makes me special,” shared Bobby of his playing style and why he was selected as a Team Canada defensive end.
Ironically enough, Bobby ended up playing tackle at the International Bowl because one of his teammates got injured early in the game.
“The other two ends were tall and skinny, and I am kind of a little shorter and thicker so I got picked to fill in at tackle. And I was very, very undersized compared to those guys.”
“We were all very nervous that Bobby had to play the tackle spot. That is usually for the really big boys, I mean 350 pound 6’6” monsters! Bobby was really outsized but he didn’t let that get him down. He used his speed to his advantage and noticed that he was tougher than he thought,” added Bobby’s mother Georgia.
As Bobby puts it, he “actually tore it up” on the field in his new position, getting two big sacks.
“… those were such a good feeling, sacking a 30-plus scholarship quarterback twice was amazing.”
Bobby also blocked Team USA’s PAT (point after touchdown) after the only touchdown they scored.
Looking back Bobby says it will always be a really good memory, as not only did he get to play on an iconic football field, but he played the “game of his life so far.”
Bobby plans to pursue football in university. He has yet to commit to a program, but is debating several Canadian scholarship options. He wants to play the game he loves as long as possible.
“I love that hard work pays off. You can have the most skilled team in the world, but you can have a team that outworks them win. I love that nothing is guaranteed in football.”