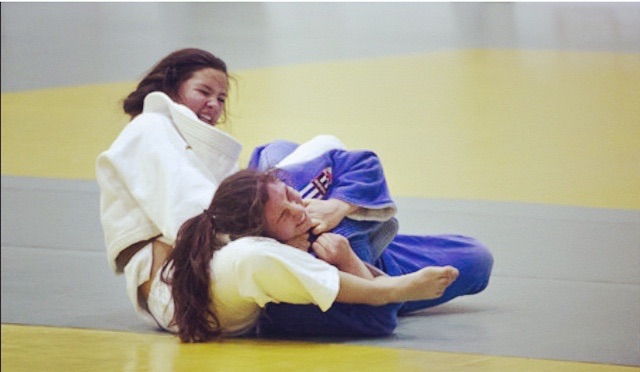 The Westwind area was well-represented at the Canada Winter Games with two young athletes bringing home medals.
Hana Varsanyi, 16, of Stirling won the gold medal in Prince George against the hometown favourite, Lavanna Laass in Judo Individual Women up to 63 kg category. She also won a silver in team competition.
In individual competition, Varsanyi entered the competition with a bye, then won her first and second bouts against two competitors who finished the competition with dual bronze medals. In the final match, Varsanyi defeated her opponent with a stranglehold to claim the gold medal.
Varsanyi is “really happy” to see how her hard work in training has paid off. “These were the best in Canada, everyone fights hard,” she said. “The girls I fought were really experienced, but I did what I was trained to do.”
Although Varsanyi had worked and trained hard to get to this level, being at the games, and winning, boosted her confidence. “I was very nervous coming in, but I realized that I deserve to be here as much as anybody else.”
As well as her personal gold medal, Varsanyi brought home a silver medal for team competition.
Varsanyi is now looking forward to competing on Team Canada, teaming up with athletes who have been her competition to this point. “The girls I fought in this competition I have fought before; I see them a lot, and we share experiences. [In them] I have a bunch of friends across Canada. Sending us as a team means we can work together as a team.”
Varsanyi acknowledges her family, coaches, and the people she trains with at the Lethbridge Judo Club and attributes her success to how they have helped and supported her.
Brandon Hardy, 16, of Raymond has returned from the Canada Winter Games with a bronze medal in Target Shooting.
Going in, his goal was simply to make the most of the experience and see how well he could do. But, he admits, “I really, really wanted a medal, so I’m really happy.”
Although he has competed against athletes from beyond Alberta, this was his first national competition. The field is really young as well, with those who placed higher also in their late teens.
As well as representing the province and the sport of target shooting, Hardy was proud to be representing Raymond. The town provided him with pins to take along and trade, and he said people responded well and he is proud to be an ambassador. “Mostly, people seem to just figure our towns here are pretty small.”
Hardy anticipates going on to Nationals this year in Ontario, but is still deciding whether he will continue with target shooting. Although he’s not sure right now how much he will be competing in the future, he said he loves shooting and will probably continue it throughout his life. “It’s a pretty fun sport. It also teaches focus and to set goals and is a good all-round experience.”
He is in the process of switching from rifle shooting to pistol shooting, which means a change of form and discipline and will continue competing around the province.