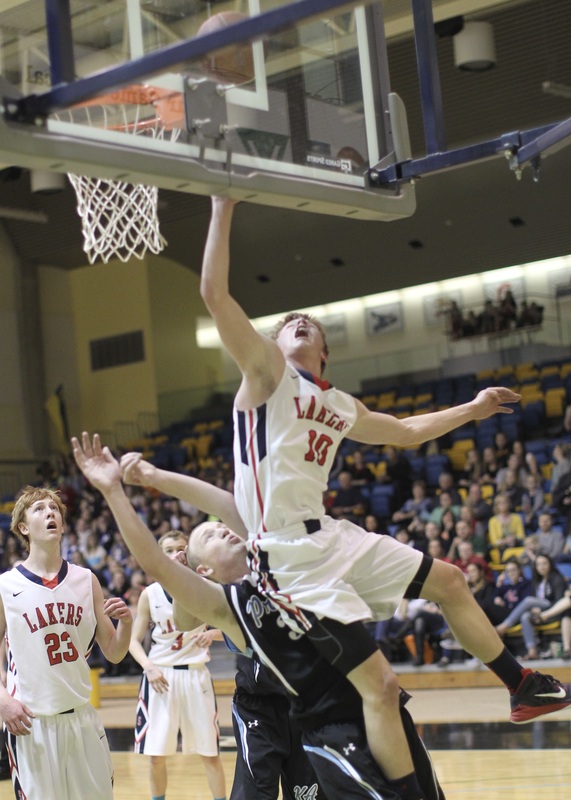 For the first time in the history of Stirling School, both senior basketball teams brought home an Alberta Schools Athletic Association (ASAA) South Zone banner in the same season. The girls squad captured the 1A title and the boys won 2A bragging rights.
The Stirling Lakers girls basketball team has always been a team that pressed the issue.
For that, the Lakers posted an impressive 70-52 win over the Milk River Erle Rivers Novas during the gold medal game Saturday afternoon at the Val Matteotti Gymnasium in Lethbridge.
Up 49-30 at the half, the Lakers went on a 14-point run in the third quarter to open up a 65-34 lead.
The Novas fashioned a 14-point run of their own in the fourth quarter to close the gap, but it wasn’t enough to threaten the Lakers lead as the number-one southern-ranked team heads to provincials in Rosemary Thursday to Saturday.
“I think our press has worked well for us all year,” said Lakers head coach Donna Branch, whose team will be joined by the Novas – ranked second in the south – in Rosemary thanks to their silver medal finish. “Our press got us the lead right away and then we had to keep that momentum and just settle back in and play ball. That’s the part where when we didn’t, they’d score. We just settled in and played our game, were disciplined and the girls did a great job.”
Leading the Lakers was Amy Mazutinec with 29 points, including a buzzer-beating three-pointer to end the third quarter that padded Stirling’s lead to 68-38.
“We came as one as a team,” said Mazutinec. “We became best friends know how to work as a team. I love all these girls.”
Kendra Quilty chipped in with 18 points for the Lakers, while Kim Herget had 12.
To get to the finals the Lakers also defeated JT Foster (66-31) and Foremost (58-39).
“They’re special girls,” said Branch. “They play together well and they care for each other and we do a lot of things together. I think that’s what’s important. When it comes down to it, when a team plays together, they win games.”
The Lakers now take their number-one South Zone ranking to Rosemary to battle and defend their 1A provincial crown. Seven members of the 10 girl squad were part of last years winning team.
The girls will open up the tournament on Friday against the winner of the Olds and Clear Water game, both teams the Lakers have not seen this year.
“You don’t know what you’re going in to going into provincials,” said Branch. “We just have to work on things we’ve worked on all year. It’s the same things we have to go back and work on and the things that are good, we’re going to leave them alone right now.”
Their South Zone title secured, the Lakers proved the team that plays together, wins together.
“We’re just committed to each other,” said Mazutinec. “We always have each others backs and we’re best friends.”
The 1A girls provincial championship game will take place on Saturday at 7 p.m.
The Stirling Lakers boys team won the ASAA 2A boys South Zone championship game 83-79 over the Immanuel Christian Eagles, the occasion marked the first time that the boys captured a title at the 2A level.
Immanuel Christian’s Mike Hummel hit a clutch three in the dying minutes to pull the Eagles within one at 80-79 and had the packed crowd buzzing, but the Lakers were able to hang on late to earn the win.
The Lakers, Eagles and Picture Butte Kings – this year’s bronze medallists – are all off to Drumheller for provincials Thursday to Saturday.
“We knew Immanuel was going to come at us hard and we were going to come at them hard,” said Lakers head coach Shawn Nelson. “That’s the exact game we told our guys we were going to have.”
Scott Mazutinec led the Lakers with 37 points. Zack Oviatt and Steele Stef also hit double digits for Stirling with 14 and 12 points, respectively.
The Immanuel Christian win was extra special because the Eagles beat the Lakers in both the Zones and provincial finals last year, noted Lakers assistant coach Ryan Smith.
“We really executed as a team today,” said Mazutinec. “We were running our offence and we handled the pressure well.”
But when Hummel hit the three-pointer to cut the lead to one in the dying minutes, the gold was up for grabs.
“We kind of got a bit flustered,” said Mazutinec. “But we ran our systems and trusted the coach and it turned out on top.”
To get to the finals the predominately grade 11 Lakers squad also defeated St. Mary’s (74-43) and Kate Andrews (86-63).
The Lakers will open up the provincial tournament Friday against the winner of the Millwoods Chrisitian and Peace River game.
“It will be a new experience for us, whoever it is … We have prepared ourselves for this all year by entering higher caliber tournaments throughout Alberta and Saskatchewan, playing against teams we don’t know anything about,” said Smith who is optimistic about the Lakers ability to adopt on the fly and adjust their game play.
The 2A boys championship final game will take place on Saturday at 7:30 p.m.