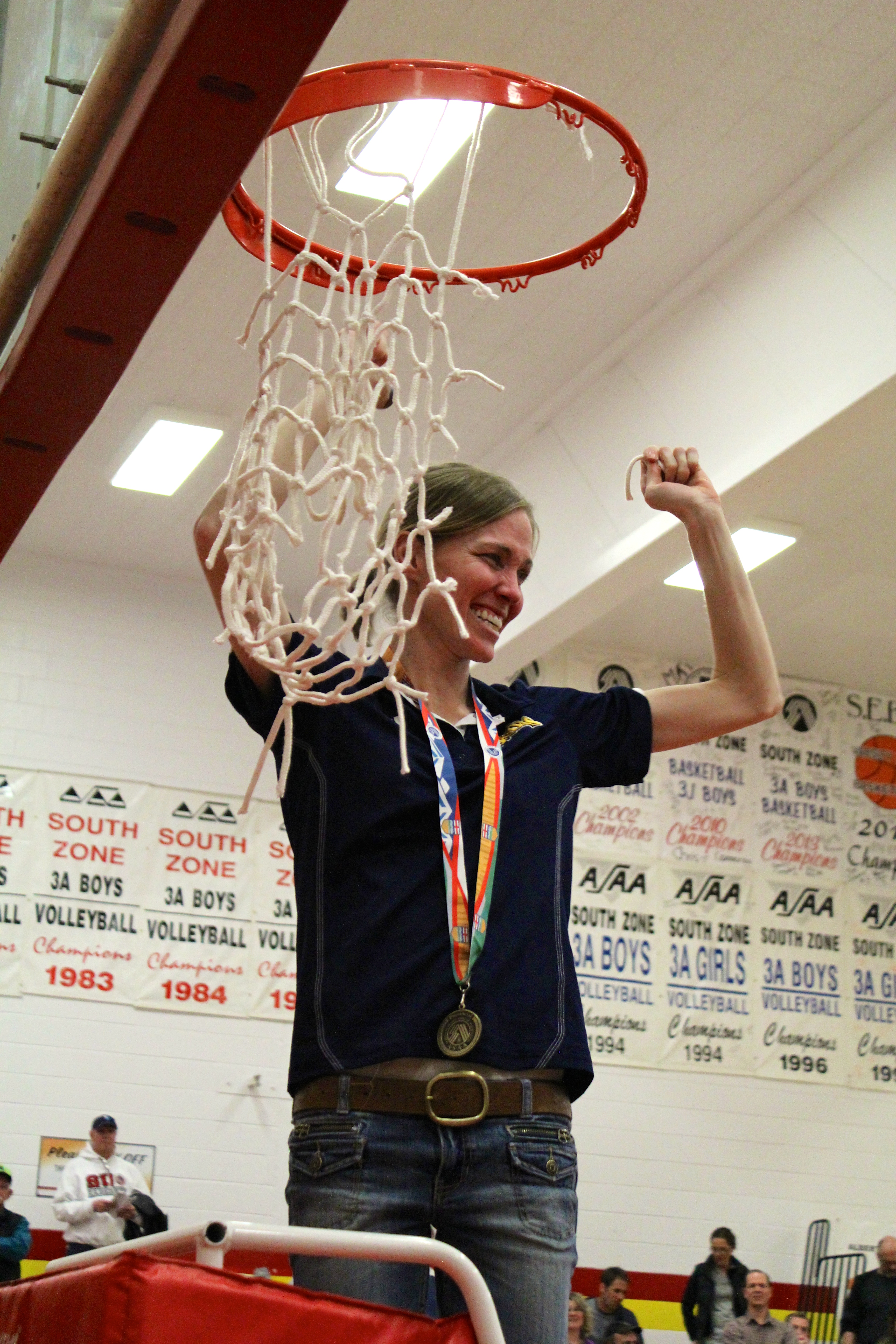 Twenty years after their last 3A provincial basketball title, the Magrath Pandas have returned to gold medal status.
The Pandas held off a late charge by the Edmonton St. Joes Saints to post a 57-51 win during the Alberta Schools Athletic Association (ASAA) 3A gold medal provincial game Saturday night at W.R. Myers School in Taber.
And she celebrated with her players post-game, chalk up a second gold medal for Pandas head coach Kristyn Barfuss, who no doubt has some fond memories of that gold medal title back in 1995.
“The last time Magrath won provincials, I was a player, 20 years ago,” said Barfuss, a Grade 11 student at the time. “It’s crazy. It’s amazing. It’s so awesome. I’m just so excited for Magrath and so excited for these girls. They’ve worked so hard and they deserve this. They’ve worked hard. It’s great.”
But the Pandas had to hold off a Saints team that wasn’t about to hand over the provincial title, who battled back to tie the game at 44-44 with five minutes to go before the Pandas pulled ahead 46-44 and moved up 49-44 with a little over three minutes to go courtesy a three-pointer from Megan Anderson.
From there, the Pandas held the lead right to the buzzer and the gold medal.
“I think it was awesome,” said Barfuss. “It was such a good game, a fun game. It was competitive, they were strong. We had to fight right to the end. What a better way to end it, right? To work for it.”
When the Saints pulled even at 44-44 late in the game, the timeout message was simple.
“Just stay calm, to keep your head in it,” said Barfuss. “We’re OK, just settle down and be smart.”
Still, it set the stage for a close finish.
“It was really intense,” said Grade 12 veteran Skyler Riggin, who had nine points in the final. “Both teams did great. This has been our dream since we were younger. We’ve been playing together since Grade 5, so we’ve worked hard and this is the moment we’ve all dreamed about.”
The 1995 Pandas provincial gold medal was before her time, but the history lesson wasn’t lost on Riggin.
“This is awesome because our coach is (from) the last girls team to win provincials. So it’s the 20-year reunion. It just makes it that much more special.”
An ability to play through adversity and a strong work ethic has been the key to the provincial gold, said Barfuss.
“These girls know how to play under pressure. A lot of them were on our volleyball team that won provincials this year as well. These seniors have some history. They had a rough go a few years ago with a good friend of theirs passing away who was as good ball player with them. I think it’s brought them really close and these seniors are tight and they’re good friends on and off the court and they know how to work hard. They’ve got heart.”
And on Saturday night at W.R. Myers, the Pandas had each other.
“We’re not just a team, we’re a family,” said Riggin. “We’ve had so much team bonding and I consider these girls to be my sisters. As a Grade 12 student it’s going to be really hard adjusting next year and not having my family there.”
Teesha Olson led the Pandas with 20 points, while Kassi Bogdan chipped in with 12.
Graduates from this years team include: Megan Anderson, Kassi Bogdan, Jamie Cook, Alyssa Doig Teesha Olson, Skyler Riggin and Tana Stewart.