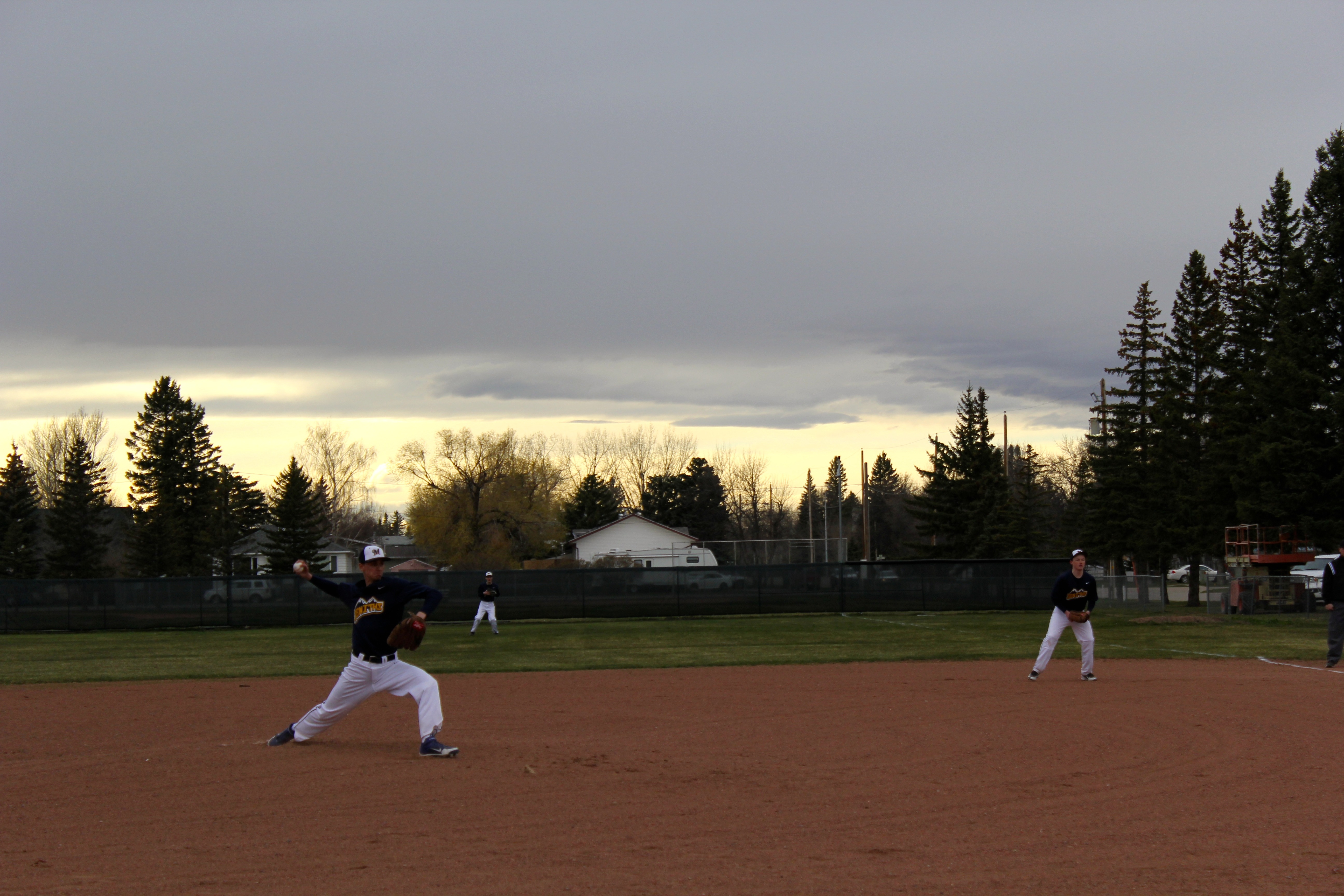 If Jordan Brame, Zeniths head baseball coach, had to pick a single word to summarize the Magrath team this year it would be young. Young, but athletic with lots of potential to have a strong 2015 SAHSBL season, he added.
“We are just young,” said Brame, before the opening game Tuesday evening against the Picture Butte Kings. “Out of the gate I can’t say if we are going to be an offensive or defensive team. We have a lot of potential with the younger guys but we are going to have to see how the boys react to real game situations.”
Mental toughness is going to be one of the biggest challenges that the young 12-member squad is going to have to over come if they want to play well out in the field and be hot on the sticks offensively.
Another thing that Brame and assistant coach Dan Pulfer are working on with the boys in practice, is preparing them for real game situations, teaching them how to best react to different scenarios and when.
“That is what is going to make the difference, how do we respond to those situations,” said Brame pointing out that many of the boys on the team have a tendency to easily get flustered with themselves because they have such a high expectation to succeed being successful athletes who are use to winning.
The boys are also going to have to learn to shake things off in the game of baseball. “You don’t have time to hang your head.”
Despite their size and age, a group of five Grade 9s are expected to be important members of the team.
“We have an extremely talented Grade Nine group that is going to push the Grade 10s, 11s and 12s.”
There is only a single grade 12 on the roster this year and a lot of the pitchers are younger athletes, replacing strong pitchers that graduated last year, and how successful they are on the mound will be a major contributing factor to how the Zeniths play.
“We are going to be living and dying by our pitchers.”
This year’s squad is very different than last year’s Provincial championship team, the boys are going to have to play smart aggressive baseball in order to win. Fans shouldn’t expect blowout games like last year.
“We look forward to better competition, we will have to work harder to become a better team, we will have to fight hard to win,” said an optimistic Brame who is leading the Zeniths for the second consecutive season.
“If I could sum up our season we know it is going to be a rebuilding year, but I have full confidence and expectations that it is going to be a competitive building year.”
The Zeniths had two-and-a-half weeks of practice in, prior to the opening game, working particularly hard indoors at the Garth Veale Arena on batting practice.
Fans are encouraged to follow the Zeniths season online at sahsbl.wix.com/sahsbl. The site contains the season schedule, team roster, game stats and scores. It will be updated regularly throughout the season.
GAME NOTES: The game was called in the bottom of the seventh inning, on account of rain and darkness, Picture Butte was up 6-5 at the time.
The Zeniths out hit the Picture Butte Kings (7-4) and were able to score almost 50 per cent of their base runners.
Despite giving out 13 walks, due to young pitchers still working out a few kinks, the Zeniths defense played tough enough to limit their scoring. Braden Anderson and Parker Clifton went 2-3 at bat with Anderson scoring both times.