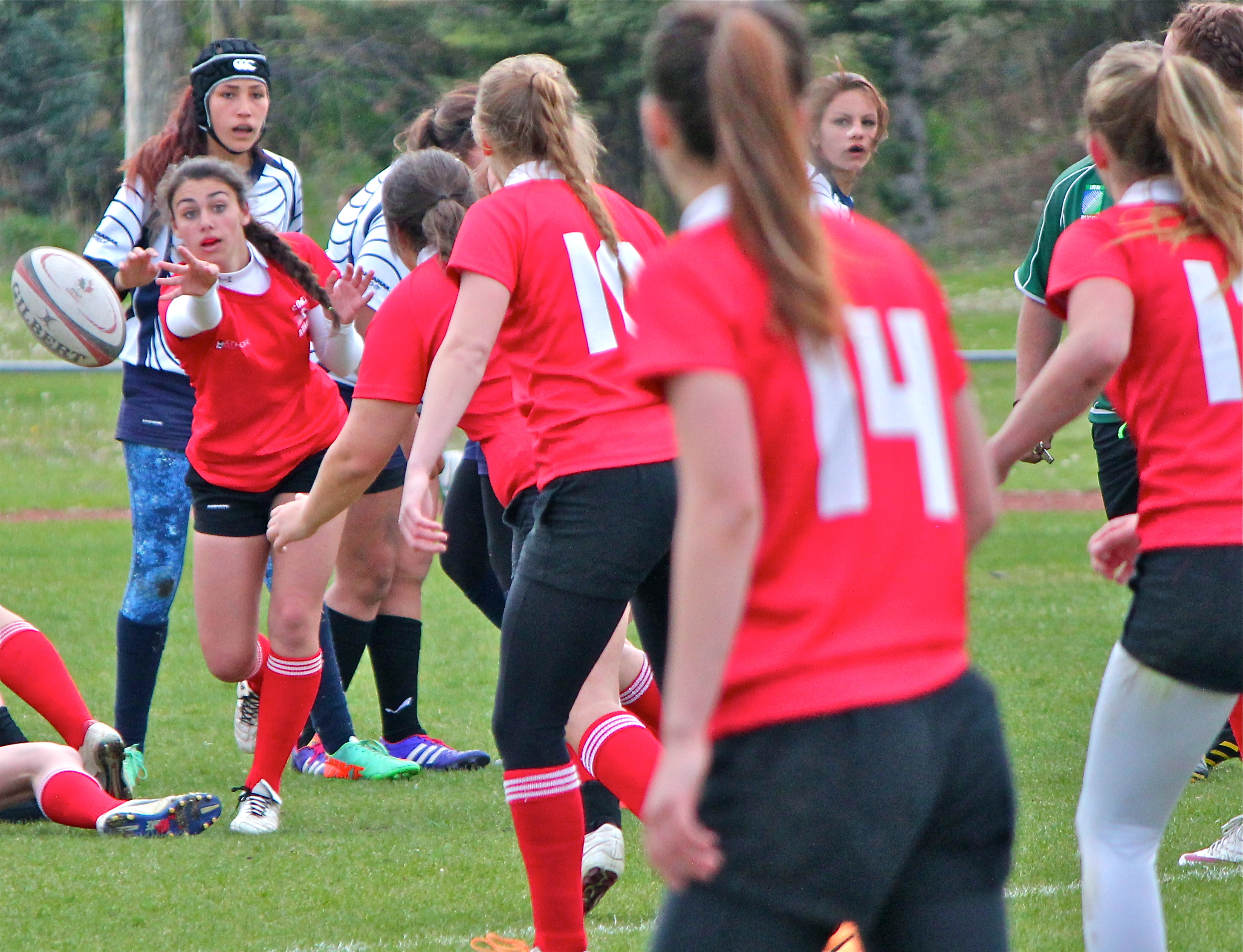 The Raymond Comets rugby program is proving once again that the red and white jersey is able to unite all the girls on the field regardless of the fact if they call Magrath, Raymond or Stirling home at the end of the day.
“The girls all have the fact that they love rugby in common and it seems to really unite them,” said head coach Dan Bikman.
The three 2015 captains – Megan Anderson (Magrath), Nevada Bartsoff (Raymond) and Taylor Maynes (Stirling) – represent the three communities that round out the Comets roster. All three have one thing in common though shared Bikman. The girls have taken on important leadership roles and lead the team both offensively and defensively.
“We have been seeing more kids come from the other communities the last two and three years. At first I thought it might be difficult, but once we all put the same jersey on and start working together they start to have fun…”
There ability to work together has posted an impressive 14-1 record as of Wednesday in Senior play. The JV team is 17-0.
The only squad to get the upper hand on the Comets was the Athol Murray College of Notre Dame team out of Saskatchewan that defeated Raymond 17-12 on May 9 at the Red Deer tournament.
“They are a well known private sports school,” explained Bikman noting that the program recruits student athletes to the boarding school.
Raymond got off to a slow start and was down 17-0 at the half. Things weren’t looking too bright for the Comets, but the girls held their heads high and scored right away to kick off the second half. The rest of the game belonged to them.
“Some kids might be tempted to role over and these kids just worked till the bitter end and made it a game.” Bikman felt if there was just 10 more minutes that the girls could have tied it up and even taken the lead.
There is rivalry forming between the two strong rugby programs, as they face off every year in the tournament and always have a close game.
The Comets are sitting pretty in league after defeating LCI 39-7 on May 6. If the girls beat Fort Macleod on the road today (Thursday) they will secure first place and earn a bye into the Zone final match on June 1.
The game is set for 7 p.m. at the U of L Stadium in Lethbridge. Bikman expects to play LCI.
“LCI is a very good team this year,” said Bikman noting that they decided to opt to play Tier I this year after playing Tier II in 2014.
With a seventh-peat Provincial title on the line, pressure is building for the girls, but Bikman stresses every season that the focus is on “this team, this year and this experience” more than it is about the Comets winning tradition.
“The grade 12s have won two Provincials already, so of course they want to do it again. When you create a tradition like that no one wants to be the one to break it.”
Regardless of the outcome, this year’s squad is already successful in the fact that they share the hard work ethic and initiative of previous winning Comerts. To prepare for the end of the season the Comets are doing the same drills as earlier in the season, but with a focus on doing them faster and with more precision.
“In the end, the team that wins the game is the team that does the basics right.”