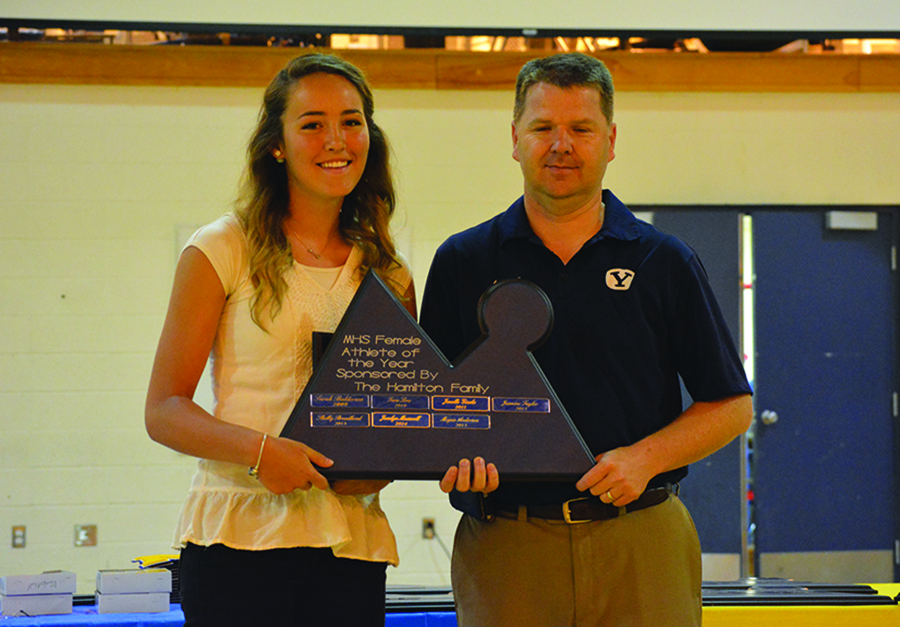 Cassidy Cook receiving the MHS Female Athlete of the Year award with Principal Rob Doig at the 2016 Blue and Gold 2016 All Out Awards inside the Tom Karren Gymnasium last Thursday night. Cook was part of the track and field team along with playing softball and basketball.

Saying goodbye in style is how one athlete in Magrath is ending her high school career.

Cassidy Cook, a senior at Magrath High School, was named Female Athlete of the Year last Thursday at the Blue and Gold 2016 All Out Awards inside the Tom Karren Gymnasium.

Cook played softball, basketball and was part of the track and field team.

Being recognized among the best is something she will never forget.

“It’s a great experience and to know that I can be part of the legacy of the girls that have won before me, seeing their names on the plaque. It’s kind of cool,” said Cassidy.

Hard work, determination and family were key in contributing to her success.

“I spent a lot of mornings in the gym with my dad and that helped us grow closer together. It helped me become a better athlete and a better person,” said Cassidy.

Byrne Cook, was Cassidy’s softball coach for four years and says she was easy to coach and someone her teammates could look up to.

“She always had lots of fun, but she was serious and never really goofed around. It made it a lot easier as a coach because she really was a leader on the team,” said Byrne.

Cassidy made a lot of friends a long the way and shared a lot of good memories, it’s something she expects to remember for a very long time.

“I love my teammates, we were great support to each other and I’ll be sad. Even though I am going to be leaving them and we are taking different paths, I know we will have that bond from playing on the same teams together,” said Cassidy.

Cassidy has big plans beginning in the fall.

She has received an academic scholarship at Brigham Young University in Provo, Utah.

Her next adventure is entirely different from what she is used to, but Cassidy is looking for to the challenge.

“I’m nervous but excited, it’s definitely bitter sweet to be leaving my home town for such different things, but I know I’ll always be welcome back here and Magrath will always be home,” said Cassidy.

At the moment, she is unclear of what she will study, but intends to pursue a degree in the medical field either as a doctor, dentist, nurse or pharmacist.