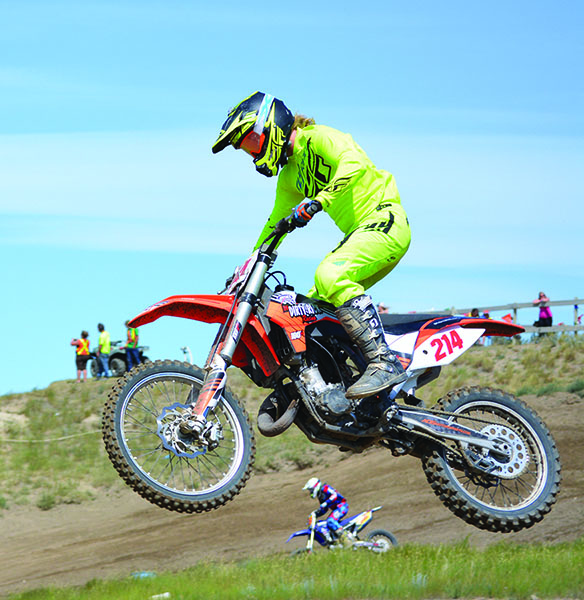 Mark Lowry out of Welling, Alberta had quite the showing at this years 2016 Western Canadian Amateur National Motocross Championship. Mark found his to the podium by placing third in the MX2 Junior B class. A significant jump from last year where he finished 8th.

The sounds of engines running, motor bikes spraying up dirt and riders being left in the dust describes last weekend for motocrossers at Temple Hill just outside of Raymond.

The 2016 Western Canadian Amateur National Motocross Championships saw some great competition as bikers battled against one another in a series of races spread out over three days.

Races began Friday morning and wrapped up Sunday evening with awards being presented to the weekend’s top riders.

Among those top riders was Mark Lowry. After finishing 8th in class MX2 Junior B last year, Mark placed 3rd this year and was extremely happy with how he performed.

“I had to charge hard because these kids weren’t letting off. They were pushing pretty hard. You just had to keep your eyes down and keep going,” said Mark.

Mark competed hard and had nothing but good things to say about his competitors.

“They were pretty quick, for a couple of laps they pushed me to the limit. It was pretty competitive out there,” said Mark.

With great weather all weekend, everybody seemed to enjoy themselves.

“The weekend turned out awesome. There was a lot of riders that came out, the track was pretty wicked all weekend and there were smiles all around. I’d say it’s been a good weekend,” said Mark.

Scott Lowry, president of the Lethbridge Motorcycle Club, played a large part in organizing the event and said so many people in the community helped make this possible.

“A lot of volunteer work, we had a lot of help from club members getting the grass mowed, the track prepared and getting everything organized. The tents lined up, activities lined up, refs and medics. There was a lot work,” said Scott.

According to Scott, the hard work paid off.

“We had a great turn out. We had more entries (this year) than we did last year. That’s definitely a plus. It’s what we were hoping for. It’s been busy with a lot of really good racing,” said Scott.

WCAN is a huge event and gets a lot of attention as people travel great distances to compete at Temple Hill. An event of this size couldn’t happen without a large group of enthusiastic riders.

“There are people who are very motivated to be the best. This is one of only three big amateur events in Canada and the only one in the west. So they want to come out and prove they are the best in Western Canada,” said Scott.

The full list of results for WCAN can be found online at http://live.tracksideresults.com.