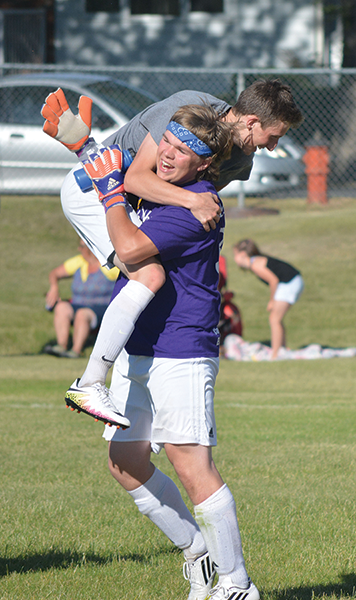 The County of Warner had a reason to celebrate this weekend in Lethbridge as gold became a popular colour for many athletes.

The U18 team took home a gold medal at the Southern Alberta Summer Games by beating Taber in the final.

Families and friends celebrated what turned out to be a great weekend of sports, as hard work and dedication paid off for many.

Kevin Olsen, coach for the U18 team, said it was great seeing the players rewarded after working so hard to achieve excellence, especially against a team like Taber.

“These kids are fantastic, they worked their butts off and kept going. They never quit and are just awesome kids,” said Kevin. “Taber was a tough team. We played them hard yesterday and we played them hard again today. We’re happy to come out on top today.”

Shayla Tatlow, left defender, said the way the team came together played a huge part in the team’s success and is grateful of the teammates she has.

“My teammates were amazing, each one of us had our individual part on this team, I just love each and every one of them,” said Tatlow.

Cale Olsen, left wing, is in his final year with the U18 club and couldn’t be happier with the outcome.

“It was pretty awesome, I’m lost for words. It’s great to get this in my senior year, this is my last year playing. The whole season was really fun,” said Cale.

The team battled through some tough opponents to reach the final and the team had nothing, but good things to say about the opposition.

“It was strong competition, they beat us the first time we played them so to be able to come back, get back on our feet and get the win was awesome,” said Tatlow.

Cale scored a huge insurance goal late in the game with a blast from inside midfield that sailed over the goalkeeper’s head. It’s a moment he will never forget.

“I looked at the net and saw that the goalie was a little out of position so I put it right where I wanted.  Top right hand corner,” said Cale. “ I was so excited, I was jumping around with everybody. It was awesome.”

To share that experience with the players he worked so hard with all season long was quite rewarding.

“They were phenomenal. They were all great teammates and we had really good chemistry with each other,” said Cale.