Rolling out of bed to run for fun 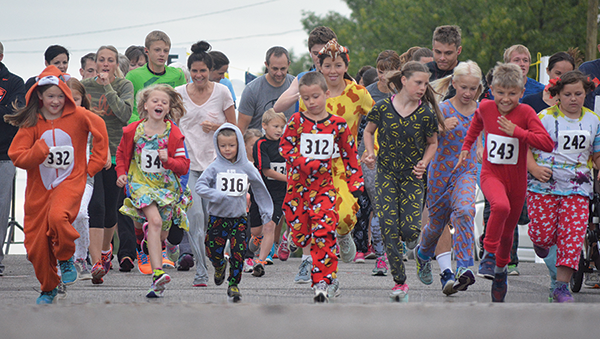 Locals in Stirling rolled out of bed early last Saturday morning to participate in the village’s annual run.

Dressed for bed was the theme as many from the community and elsewhere showed up to race in the 5K Pajama Run as part of the Stirling Settler Days.

It was a colder morning than usual, but once the competitors got running, things started to heat up.

Over a hundred people took part in the race and Stephanie Michelson, who has been coordinating the event for about 10 years, says the support she gets from the community doesn’t surprise her.

“This is a real healthy fit conscious community. It’s an early morning run that started out with maybe 30 or 40 runners a decade ago. We have so many more participants now,” said Michelson.

The run has evolved over the years because of the interest from the entire community.

“It has turned into a family event. We get lots of seniors coming out to do it and we have tons of kids. There are little guys who are three and four years old running it. Because of it, we started the 2K race to accommodate the little legs who have to run,” said Michelson.

People have appreciated that these runs accommodate any runner at any level.

“We are trying to learn to run and it’s an easier run for us. There isn’t a bunch of hills or anything like that, so it’s a good beginner run. It’s also nice to be in our pajamas,” said Natasha Pittman and Denise Boisvert.

They add, it’s much more fun running in pajamas.

“There’s lots of comfort. You can move easier and we are very stylish,” said Pittman.

Fun is exactly what this run is all about. A little more so than just competition.

“We don’t hand out medals and we don’t care if you are first or last. We have prizes for people who show up in their pajamas or slippers, show up with bad hair or makeup running down their face,” said Michelson. “The time doesn’t matter, we don’t even clock it. It’s all about having fun.”

An event like this takes a fair bit of planning and the people of Stirling continue to step up when needed.

“Stirling is the best for volunteers. If you want to talk about community spirit, this place has it. I simply get on the phone or Facebook and ask for help and I get lots of people who will do it,” said Michelson

No matter what the tasks may be.

“They will stand out on the route and make it safe for people. They have done this for so many years that they know what they’re doing. They get up early to put out all the pylons and barriers in place. They hand out the prizes, they do the food and they register people. There is no shortage of volunteers in Stirling,” said Michelson.

Once the run was finished, many of the runners headed over to the Community Centre to enjoy a pancake breakfast.