Swimmers come out to test their endurance 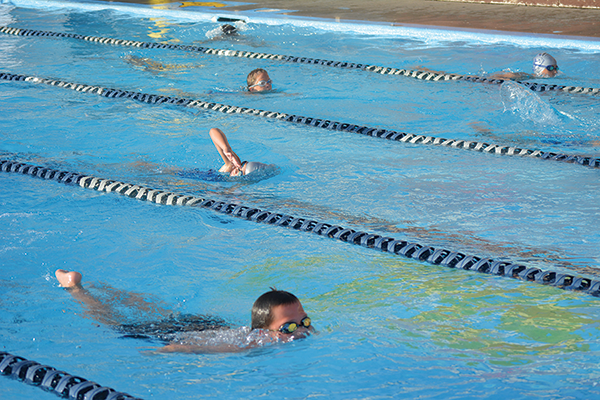 Athletes in Magrath tested their stamina and strength on the morning of July 27 at the town pool.

The annual swimathon took place as swimmers swam as many laps as they could in 30 minutes.

Not only does this event test the swimmers endurance, the swimathon is the only fundraiser the swim club does all year.

The swimmers went around town and gathered pledges based on the amount of laps they were able to swim within the time limit.

“It’s a chance for the swimmers to raise some money so they can buy equipment like paddles, flippers and float boards. It also helps pay for the clinics,” said Geralyn L’Heureux, President of the Magrath Swim Club.

At the beginning of the season, the kids need to be able to swim one full lap to meet the requirement for registration.

Swimming coach, Daryn Hubbard, says their improvement is something he notices very quickly.

“To watch them by the end of the first week and see them swim multiple lengths without stopping along with gaining strength in their abilities is really remarkable. It’s quite inspiring,” said Hubbard.

The swim club runs every morning, five days a week. The dedication shown by the kids and their parents is something that has really stood out.

“We have a two hour program every day. It’s been great to see the support from parents and from the kids. It’s a little tough during the summer when you should be on holidays, but you have to get up earlier than you have to for school,” said Hubbard.

With the season coming to an end next month, L’Heureux has put a lot of work into the swimming club and gave the swimmers a chance to learn a lot about what they need to know about swimming.

A highlight of this season was when she brought in two of Canada’s best swimmers;  Rachel Nicol, who will be competing at the Olympics in Rio De Janeiro and Ryan Thornley who went to Olympics trials in Toronto.

“It’s been a great season. I think it’s been exciting, we’ve have had something for the kids almost every week. We’ve either had a clinic, a swimathon or a swim meet,” said  L’Heureux.

The swimathon finished with prizes and cash donations to some of this years top swimmers.

The final swim meet of the season will be held at the Magrath swimming pool on August 13.