Comets drop their first game of the season at Victoria Park 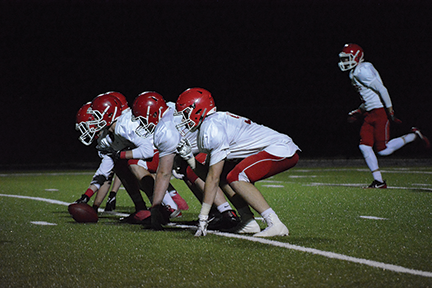 On a cool night in Raymond and a packed house at the new Victoria Park stadium, the Raymond High School football team fell short against one of the top teams in their division.

The hometown Comets lost to the Bev Facey Falcons under the lights last Friday night of a score of 28-0.

It wasn’t the outcome they were looking for, but Matt Baines, assistant coach for the Comets, says it was a good opportunity to see how the team would handle playing a strong team.

”It’s the first game of the year and it was a great way to measure ourselves. Facey is a quality program and we knew we would have to play well coming in. Early on, the game was close, but we just made some mistakes. We weren’t as sharp as we needed to be,” said Baines.

Moving forward, Baines believes it will only make them better.

“This gives us a chance to see where we are at compared to one of the better teams in the province and we’re just going to keep working hard. It’s disappointing, but the effort was there and we just need to be a little sharper,” said Baines.

The Falcons were the bigger and more physical team on Friday night and it didn’t come as a big surprise from the team out of Sherwood Park.

“You expect them to be good every year. They’re traditionally a good school. When they needed to, they executed well and they finished their blocks. They played well and you need to give them credit. They came down here, it was a big game and they did what they needed to do to win,” said Baines.

This year’s version of the Comets sees a lot of new faces, including a large number of grade 10’s, and Baines understands there will be a learning curve.

“We had a lot of young guys playing tonight. I think at times we did a lot of things very well, but just not enough to get the win,” said Baines.

Next up for the Comets is a trip to Regina for a game against Campbell Collegiate on Saturday and Baines is expecting a big effort from the team.

“I think we played a bit short of what we can (last week). These boys are hungry and ready to get after it. I think with another week of practice under our belts and after watching some film, we will see where we need to get better for next week,” said Baines.

This was the first game the Comets played at the new Victoria Park stadium and apart from the home team losing, everybody seemed to be enjoying the new facility and the beginning of the new season.