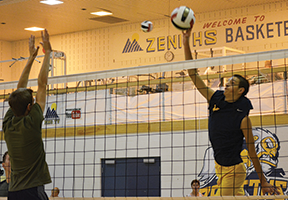 With high school now under way, athletes are gearing up for what they hope to be a successful season of sports in Magrath.

Head Coach, Shane Orr, had a young team last year and says they got a lot of experience from that.

He said the focus for last year was putting the boys in difficult situations and understanding when they’re uncomfortable they learn faster.

“We did that and so far as I am looking at what we have this year, it looks like it paid off. We’ve got guys who have come back who are not only bigger and

Orr says improving the team every day is the main goal at the beginning of every season and this year is no different.

“Expectations this year are that we keep getting better. I’m trying to put less of a focus on winning. I’m a competitor and I hate to lose and I know the boys on the team hate to lose, but we need to focus on getting better and the wins will come,” said Orr.

Last year, the team was put in situations in which they weren’t used to and played some really tough teams.

Orr believes facing adversity last year will be the strength of the team this year.

“I think these boys coming in are more confident and know they have the ability to win if they work hard together as a team. They will be able to push any team down here in the south and possibly any team in the province,” said Orr.

Orr has really enjoyed coaching volleyball and says it’s different from what he experiences in the classroom as a teacher.

“I like being around the guys in a different atmosphere. It’s a way to shake things up and connect with the kids on a different level. You get to see the new kids coming in along with the older ones grow up,” said Orr.

The juniors shared the gym with the seniors Friday afternoon as they look to build a successful team as well heading into the new season.

MHS will be hosting the preseason tournament tomorrow and Saturday. inside the Tom Karren gymnasium.