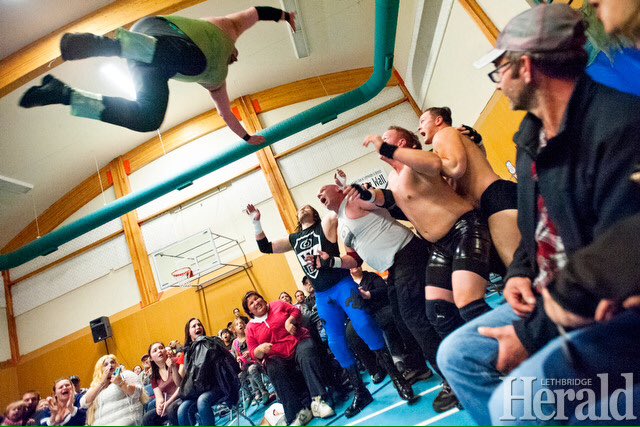 The landscape of Pure Power Wrestling was changed for good as the One World Empire was destroyed from within at The Knightmare before Halloween.

In a spectacular main event, OWE was finally put to rest by Team PPW in a no holds barred six-man tag team elimination match. The match started with Little Brother MacBain against the Irishman, and the two teams took turns adding members until all six were in the battle. At one point, all eyes were on the sky as The Irishman leapt off the corner post and onto a crowd of fighters on the floor.

“When it’s all on the line like that, you don’t really think,” he said after the show. “I saw an opportunity, I knew I could take out the entire OWE in one shot, so I climbed to the top of the ring and took the 12-foot dive off it. And it worked.”

As the match wore on, OWE seemed set to take permanent control of PPW, as it was left to Irish to fend off all three OWE fighters himself.

Capitalizing on a series of mistakes, he managed to eliminate first Little Brother MacBain and then Bulldog MacBain, leaving him alone with Chris Perish, the architect of OWE.

Perish, thinking the end was at hand, called Bulldog from the back to help him finish Irish off. But just as it seemed OWE was about to take over PPW, Bulldog flipped the tables by turning on Perish and allowing Irish to score the win.

The betrayal by Bulldog with the entire company on the line was just part of the plan, and had been in the works for the better part of a year.

“These guys came in and they took over PPW by storm,” Bulldog said of OWE.

That’s when Little Brother came up with a plan to destroy OWE once and for all..

The plan was for the MacBains to join OWE and become trusted companions of the group. At the same time, OWE began to experience an unprecedented run of bad luck.

“I don’t know if anyone noticed,” Bulldog said. “At the same time we joined OWE, they started losing title belt after title belt. The Empire started to crumble from within.”

Bulldog said by the time the winner-take-all match took place, everyone was in on the plan. Everyone, that is, except OWE themselves.

“Anybody thinking they are going to come in to PPW and just take over, they are going to be outbrained, outmuscled, outmaneuvered, and they won’t stand a chance. We didn’t build this so some jackass can come and take it over and take it apart. We built this to stay. Traditional, professional wrestling, the way it should be.”

“Chris Perish thought he could come in and take over PPW. And we let him think that. Right up until the end.”

The other main event of the evening featured special guest “The Vampire Warrior” Gangrel against “Cougar Meat” Kyle Sebastian, with Sebastian scoring the win.

“That’s not my first battle with Kyle Sebastian,” said Gangrel after the match. “I‘ve faced him a few times before when he had a tag partner. So I know what he’s capable of.”

“That was a pretty big boy he had at the ring with him this time, and he caught me off guard with that clothesline out on the floor,” said Gangrel.

“I should have never let my guard down. Today, youth won out. It was two-on-one, but I’m not making any excuses.

“I’m looking forward to a rematch, to do a little fangin’ and bangin’ to get some revenge.”

BSB seemed quite pleased with himself after scoring a win against Kid Cyrus.

“Silverback’s dead,” he said. “He started dying in the ring six months ago when I started losing, and the crowd just wasn’t behind me. And he really died a month ago when I shaved my beard.”

“I heard I was wrestling Kid Cyrus, and I knew it was going to be a slaughter,” he said. “Basically everyone goes with the same approach. Speed versus strength. I’ve gotten used to it. He zipped around me a couple times, but I caught him, and I murdered him.”

In other action,  the PPW Heavyweight title has been left vacant after both “The Tattooed Terminator” Massive Damage and  “The All American” Steve Rivers appeared to score pinfalls in a chaotic end to their match. The Gothic Knight decreed there will be a rematch for the title in November.

Gangrel said he was impressed with what he sees for professional wrestling in Lethbridge.

“It was awesome to be here,” he said. “The fans are really great. The energy was awesome. It’s just been a tremendous experience.”