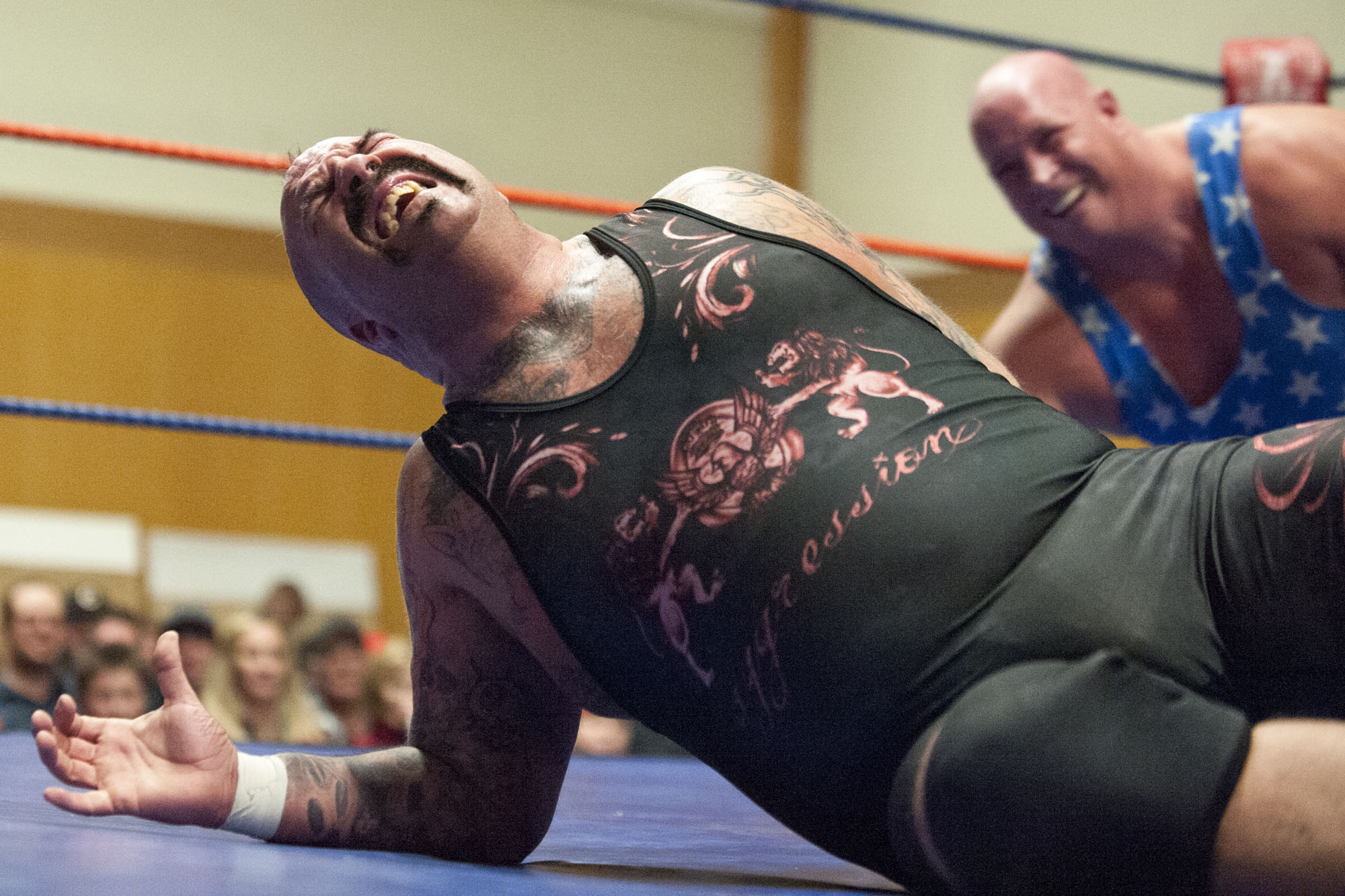 Herald photo by Ian Martens "The Tattooed Terminator" Massive Damage grimaces after a move in the heavyweight title match with "The All-American" Steve Rivers. The two will meet in a rematch this Saturday during "Night 2 Remember"

Who is the Pure Power Wrestling Heavyweight Champion?

This Saturday, the world will find out at during PPW’s Night 2 Remember event at the Boys and Girls Club of Lethbridge.

The final Pure Power Wrestling event of the year will see two title matches on the card and enough action to hold fans over to the new year.

Last month, “The All-American” Steve Rivers was the mystery opponent for “The Tattooed Terminator” Massive Damage. The two have battled in the past, their familiarity bred all kinds of contempt in the ring.

Things went sideways when the referee was inadvertently knocked out by an errant shot from Rivers. When Rivers locked in a crossface submission, Massive Damage tapped out – but with no referee to end the match, the champ was spared a defeat.

Payback came after a spear from Massive Damage had Rivers down and out – and this time Rivers’ title bid was saved because the ref was still on the ground and unable to count the pin.

The match ended when Massive Damage hit Rivers with a German suplex off of the top rope that saw both men’s shoulders down. By this time, the referee had recovered enough for a pin count. But at the exact same time, another referee had come in on the other side for another pin count. As a result, each man was deemed the winner by one of the referees.

That’s when PPW Commissioner Gothic Knight entered the ring and gave a ruling that the matter would be settled at a Night 2 Remember.

Rivers has been riding high since Donald Trump won the U.S. election and is looking to bring the gold home to the U.S. as a Christmas gift to his American fans.

“First, our fearless leader Donald Trump wins the election and now another American hero is coming home with a monumental victory,” said Rivers. “This Saturday, I am going to make wrestling great again. And I’ll have the PPW Title mounted on my mantle over Christmas.”

“There’s no controversy here,” said Massive Damage. “I pinned Rivers once last month, and I’ll pin him again. I’ve been fighting Steve Rivers for nearly 20 years and this Saturday, he finally gets terminated.”

The other big match of the evening will feature another battle for the gold as PPW Cruiserweight Champion Cyanide will put his title on the line against former champ and the man he beat for the belt, “Youngblood” Cody Blayde.”

Blade is one of the most dynamic high-flyers in PPW and is always a crowd favourite.

But Blayde has proven susceptible to the insidious ground game employed by Cyanide, and the the constant ringside distractions from his manager, “Black Heart” Vinnie Valentine have turned their previous bouts into de facto handicap matches.

“I told you all that I was the Manager of Champions,” said Valentine. “My client, Cyanide, has beaten Cody Blayde once. He’ll beat Cody Blayde again. He can do all the high flying and top rope flips that he wants, but we’ve got surprises in store for him.”

Last month, fans had their first look at the newly-minted Adult Social Society and were given a sense of what “Cougar Meat” Kyle Sebastian had been planning as the architect of the group. “Big Sexy Beast” Bradley Graham – formerly known as the Primate Silverback – beat Kid Cyrus to a pulp and gave the masked speedster a concussion in the process.

The team-up paid off again later in the evening, when BSB interfered with Sebastian’s match against WWE legend “The Vampire Warrior” Gangrel, allowing Cougar Meat to score the win.

Expect to see The Adult Social Society in action again on Saturday.