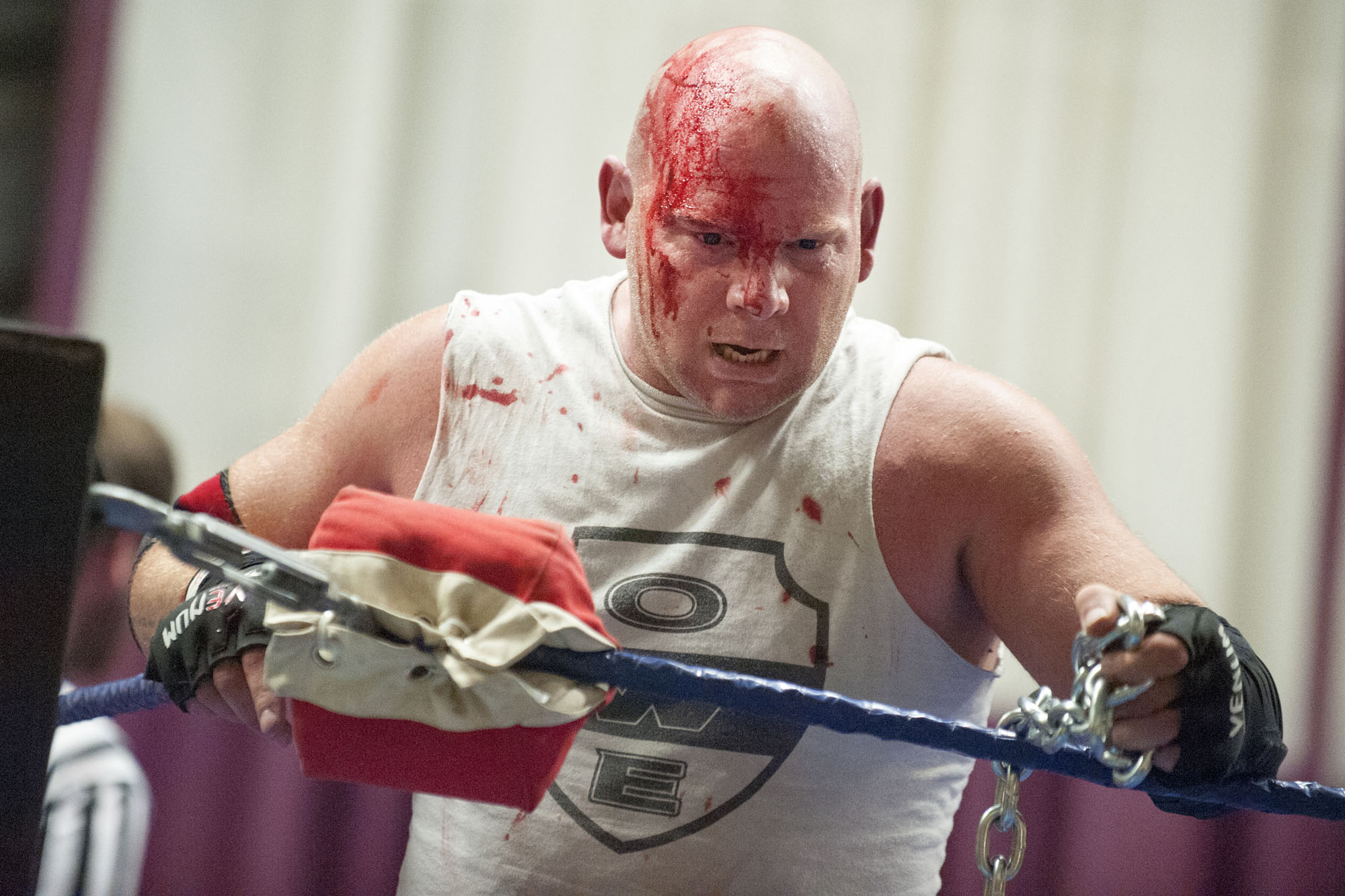 Herald photo by Ian Martens A bloodied Richard Rainey "Bulldog McBain" fights in his last match before retiring from ring.

Richard “Bulldog McBain” Rainey first stepped into the squared circle at the age when many professional wrestlers are hanging up their boots.

“It’s not something people start when they are 38 years old,” he said. “That’s when most people are quitting.”

At 44, Rainey is retiring after six years in the ring. His left elbow “is a mess.” He has two herniated disks in his back. His skull is a roadmap of scars from chair shots and stitches he has taken over the years.

He’s also been the Pure Power Wrestling Heavyweight Champion three times, a Monster Pro Wrestling tag-team champion with The Irishman during their run as The Heavy Hitters, and was part of a team that held the tag titles for Canadian National Wrestling Alliance for close to a year.

In that time, he wrestled mixed martial arts legend Dan “The Beast” Severn several times and was taught by him. He met the wrestling heroes of his childhood. He crisscrossed Canada and he performed to the delight and spite of crowds large and small.

“Our goal is to encourage people,” he said. “So we (appeal to) people who don’t have high incomes, or who might have disabilities. We have a lot of individuals with special needs. We see a lot of underdogs of society in our fans.

“We’re local guys. We’re all the same. But in their world, if we are heroes, then we have an obligation and responsibility.

“And it’s nice for them to hear it in a place where they are not judged.

“Life happens to everyone. You have to get yourself up, and you have to keep pushing. It doesn’t matter if your reality is different, and you’re not physically capable of doing the same things (as everyone else). None of those things matter. You are capable of something. Use it, and go. Succeed.”

Rainey waited a long time for his shot. He battled addiction and substance abuse for many years.

“The demons, so to speak, were always in the way,” he said.

It wasn’t until he started talking Ed Gatzky about plans to start up a pro wrestling show in Lethbridge that Rainey started to consider the opportunity before him.

Rainey was working out at the YMCA, where he met Kevin Farrell — another Lethbridge wrestling talent who performs in the ring as “Sydney Steele.”

“I don’t know how I started talking about it, but I discovered he and (Gatzky) were both doing this thing together.”

Rainey wasn’t looking to get famous. He was well aware of his age and limitations.

“Really, all I wanted was a couple of stories for my grandkids when I got older,” he said. “Grandad was a wrestler. I could show them some pictures, and it would be fun.”

“I didn’t expect anything. But what I got in return, you would not believe.”

One of the biggest things has been humility. Professional wrestling may be filled with characters who are larger than life, but behind the scenes there is a strong sense of honour. Wrestlers respect those who came before them.

“If you don’t go about conducting yourself in a humble way, in professional wrestling, you’re not going to last long,” Rainey said.

“That’s the competition right there. We compete to be the best we can be with ourselves. But we’re also competing to push each other’s moral character up. That way, we all represent professional wrestling better. Some people naturally have that, and some people struggle with it.”

He also learned about teamwork, and how important everyone is to the success of the show — no matter what their job is.

“People have to understand that the referee in the match is important,” he said. “The lady who stands behind the counter and sells concessions is important. The girl we have with special needs who puts up the posters and helps with chairs is important.”

As a villain, Bulldog McBain was in part an extension of the person Rainey was when he was battling addiction.

“It’s almost a bullying extension of the character I was when I was drinking lots,” he said. “A really arrogant, opportunistic (person). If it’s a fair fight, I don’t want any part of it.”

For the fans, the performance of the professional wrestling morality play offers something else: A sense of belonging, and a message of hope. It brought them out to cheer or jeer Lethbridge’s Rainey for six years.

“That’s a compliment,” he said. “The ones who show up every month are honouring you and telling you they really like what you are doing.

“They like the stories. They are going to give up a night of anything to come and watch you.”