Stirling 1A girls headed to provincials 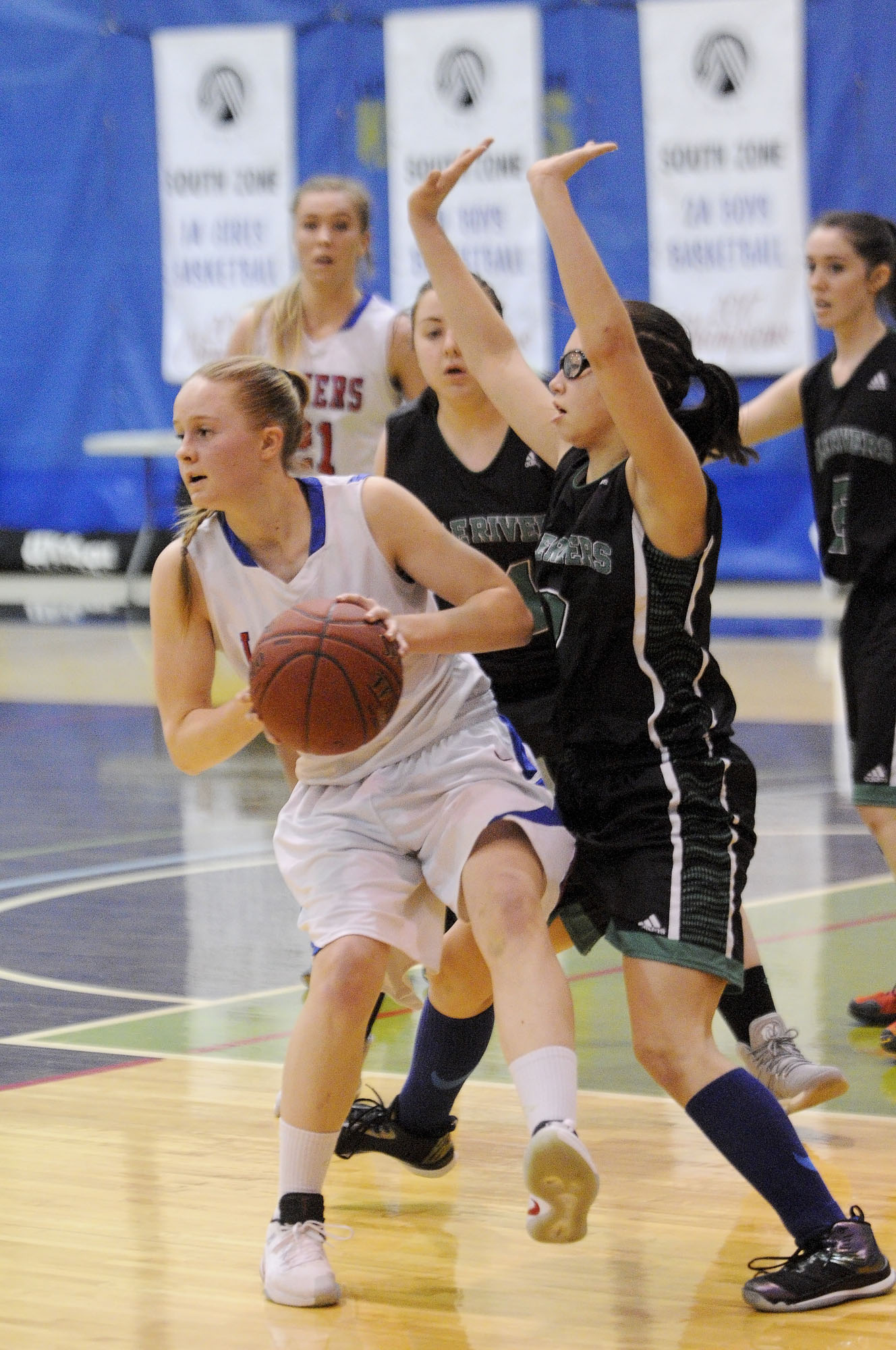 Herald photo by Dale Woodard Stirling Lakers' Gracie Nelson looks to dish off a pass while Erle Rivers Novas' Mackenzie Murphie puts up a wall of defence during the 1A girls gold medal game at the South Zone Basketball playdowns at the Val Matteotti Gymnasium at Lethbridge College. The first-seeded Lakers posted an 85-45 to earn this yearÕs banner. In the 2A girls gold medal game, the Immanuel Christian Eagles downed the Coaldale Kate Andrews Pride 79-28, while in the 2A boys final, the Claresholm Willow Creek Cobras edged the Vauxhall Vikings 86-84 in overtime. The 1A boys gold medal game between the Lundbreck Livingstone Sabres and Senator Gershaw Gators was still in progress at press time.

A trip to provincials is on the horizon for the Stirling Lakers 1A girls basketball team.

Stirling advanced to the March dance with an 85-45 win in the 1A south zone championship game over the Milk River Novas. Amy Mazutinec struck for 31 points in the victory, while Sadie Nelson added 28.

In the semifinal, Stirling routed Senator Gershaw by a score of 83-51. Nelson led the way with 28 points, while Mazutinec helped pace the offence with 25. Savannah McKee added 19.

The girls now prepare for the provincial tournament, which will be held this weekend in Bawlf. Stirling will receive a first-round bye, and will take on the winner of Thursday’s Viking High/Hines Creek Composite game. That contest will take place Friday at 10:15 a.m.

Should Stirling advance all the way to the final, that game will be played Saturday at 7:30 p.m.

For more on the tournament, visit this link: asaa.ca/championships/site/2017-1a-girls-basketball

Stirling’s 1A boys team was not able to qualify for provincials, despite a solid start to the 1A south zone tournament.

The Lakers won the tournament opener, 78-73 over Noble Central, as Brady Sillito led the way with 28 points. Liam Leech added 14 and Slade Gurney chipped in with 10.

Stirling dropped the next contest, however, as the Lakers fell 67-43 to Livingstone. Sillito had 16 points in the loss.