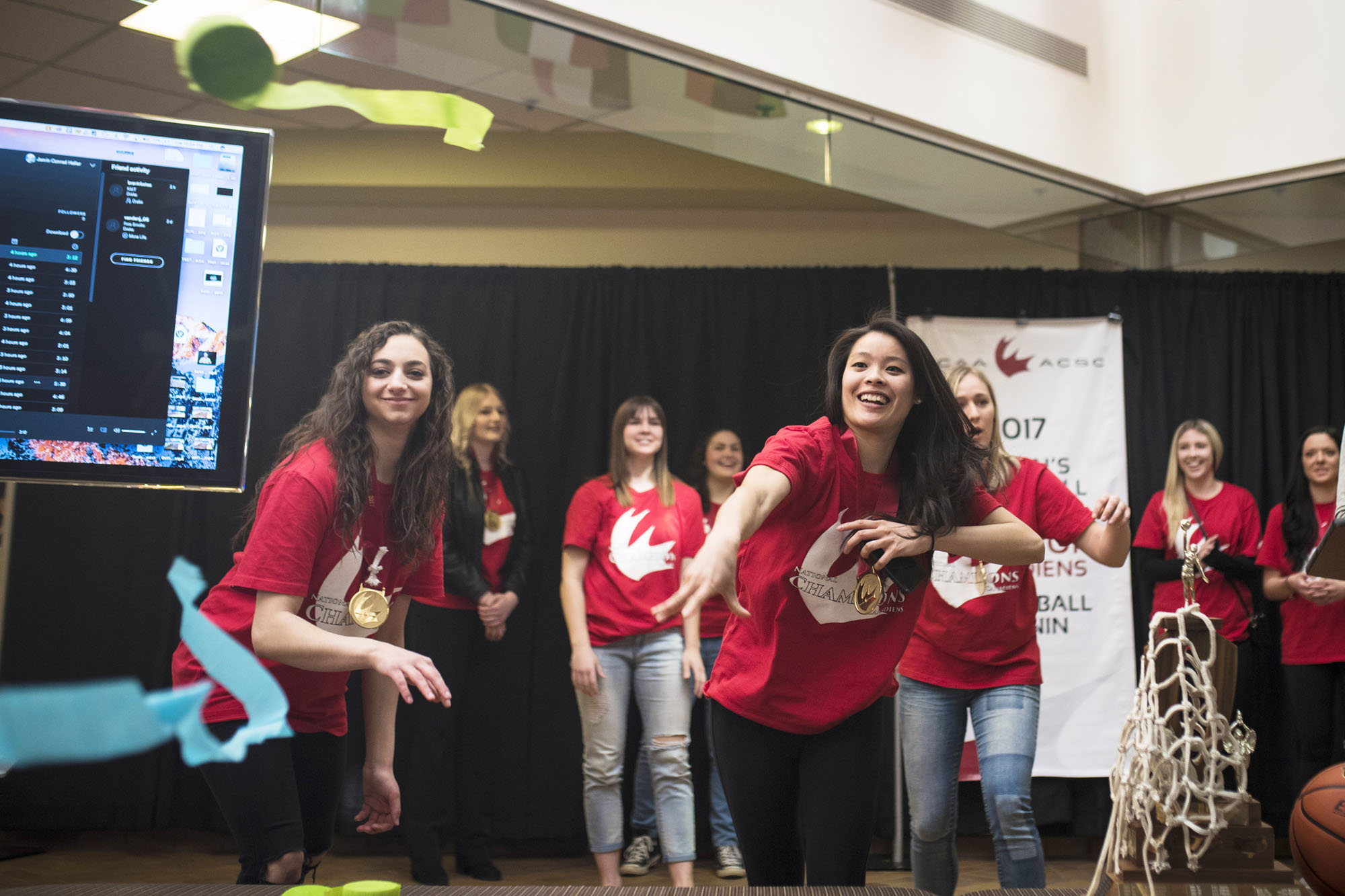 © Lethbridge Herald photo by Tijana Martin Members of the the Lethbridge Kodiaks basketball team throw streamers into the crowd during a rally on Tuesday to celebrate their national championship. @TMartinHerald

A large crowd greeted the team in Centre Core for the rally to celebrate the Kodiaks’ fourth national championship. Coach Brad Karren, originally from Magrath, said while the players and staff may be celebrating right now, he doesn’t think the win has really hit home yet for many of them.

He said he was not surprised by the outpouring of support for the team.

“They’ve been doing this all year long for us,” he said. “It’s something we’re used to, but it’s something we really appreciate. (The fans) are the reason we win a lot of games, because they get behind us, and it makes the girls play better.”

“The feeling is still a little bit surreal – it doesn’t fully hit you until you are reminded every day that you are a national champion, and nobody can take that away from you,” said Kodiaks player Jaclyn Heggie.

“You just can’t stop smiling at that feeling you have in your stomach – being an undefeated national champion. It’s pretty cool, coming from a small town like Raymond. It doesn’t always happen.”

A common feeling on the team is that it has transcended the bonds of sport and that they are a family now.

“When I came in on my first year as a rookie, they just took me in,” Heggie said. “Ever since then, we’ve had this special bond nobody can take away from us. It is a special friendship that will stick with me forever.”

Karren said it’s possible to have good players and still not find success, which is why this team was built with players who had a high level of skill but also are able to commit to each other and form a team bond.

“We focus on players that fit in with each other, get along, and become friends,” he said. “That’s the way you win.”

Heggie said the way the season ended last year was a motivating factor in this year’s undefeated season and eventual title win.

“It’s something that is always in the back of your mind,” said Karren. “We had some struggles. We had some girls who got really sick and couldn’t play in that game. It just kind of threw us off a bit. You can always lose a game, but you have to prepare mentally for every single minute of every game.”