Taber hosts a night of fights 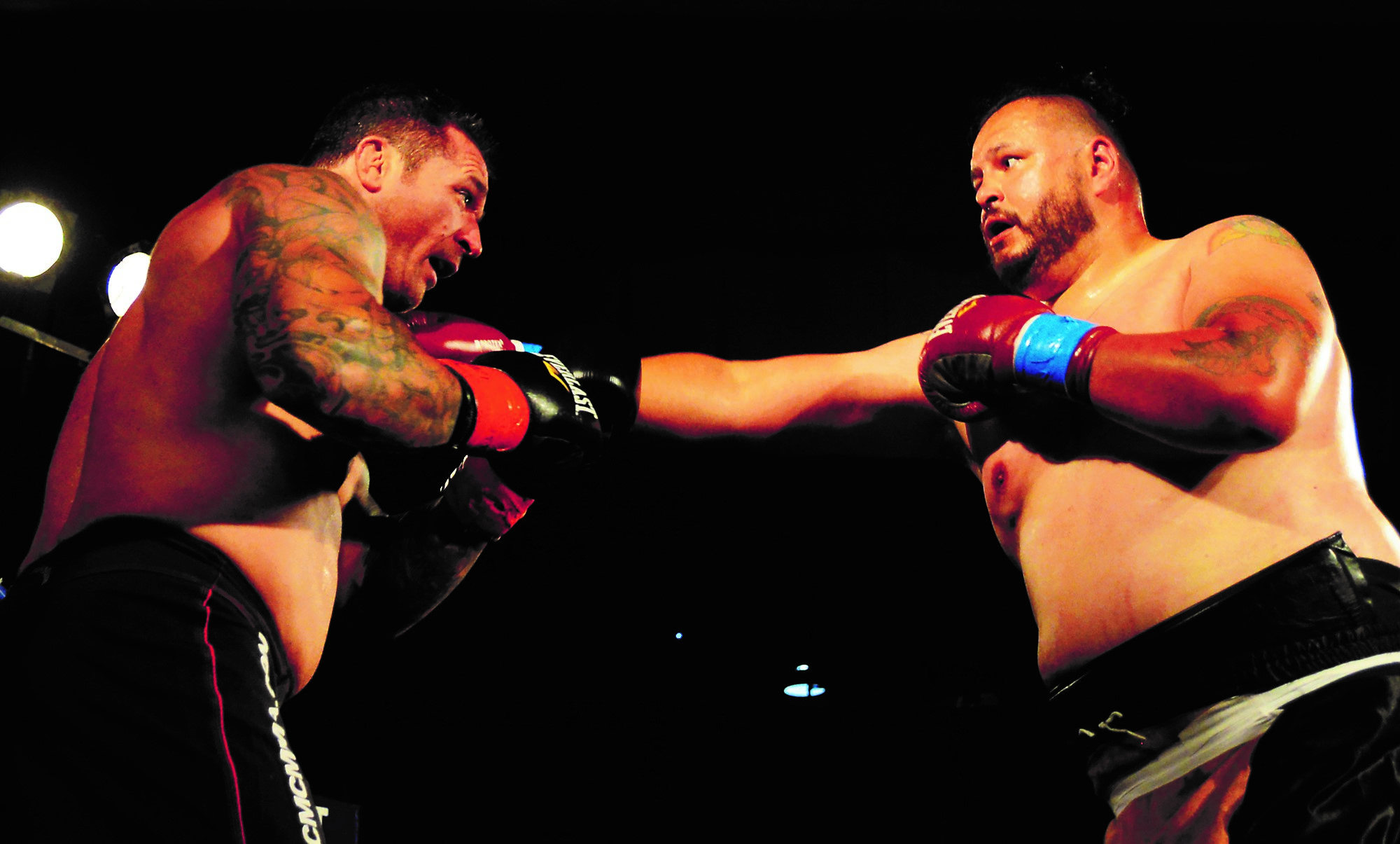 While Taberite Joel Mills was the headliner at Teofista Boxing Series #24’s Unfinished Business on Saturday night at the Taber Arena, there was still plenty of other local talent putting on the boxing mitts.

Five boxers training at the Pro Performance Athletic Club boxed at the event with favourable results from their amateur fights.

Brad Olson came into the ring with the classic ‘Eye of the Tiger’ blaring from Survivor.

In his 190-pound senior novice division, it was his opponent Jeff Loken from Athabasca who had to play survivor, eventually falling in a first-round KO as Olson proved the aggressor.

Loken was knocked down for the second time in the round in which the referee stopped the contest.

Les McTaggart gave away some height to his opponent in Athabasca’s Kolt Nahirney in the 165-pound senior novice class, but used that to his advantage, getting under Nahirney’s jabs.

A non-descript first round was anything but in the second round as McTaggart delivered a devastating liver punch that had Nahirney having to take a standing eight count.

The second round featured McTaggart tagging Nahirney with three rights crosses in short succession as he had the ring cut off in the corner.

The third round featured McTaggart going back to the body to the point it looked like the meat freezer scene off of Rocky where the referee would eventually stop the fight to deliver McTaggart the win.

With both warriors bloodied, Brent Anderson won by unanimous three-round decision over Edmonton’s Dustin Thompson, in what looked like the favourite amateur fight judging by crowd reaction.

Anderson stalked his prey in the first round with a more measured approach, Anderson was able to set up his jab nicely and working on his uppercut to some success.

Right near the end of the first round, Anderson landed a beautiful jab—straight right combo, visibly stunning his opponent.

Both combatants were bloodied in the second round with a moment being poignant with how hard both the two fighters fought. Anderson got hit hard with right hook by Thompson, only to return the favour a short time later with both fighters managing to stay on their feet.

Any doubt that was lingering if Anderson would win the fight was quickly quieted in the third round as Anderson was able to connect with jab after jab, taking advantage of Thompson dropping his hands.

Jabs followed by the right cross combination landing with aplomb made for a unanimous decision for Anderson in the 165-pound senior novice division.

If punches were vitamins, the bout between Pro Performance’s Justin Young and Lloydminster’s Koby Shorter showed both fighters must be very healthy. A good old fashioned donnybrook in the 132-pound Cadet ‘B’ division, the fight had by far the most punches thrown.

Young started off slow, losing the first half of the first round, but a Houdini act seemed to energize him as he slid out from the corner, only to reverse the favour and trap his opponent in the corner and pummeled away.

Young proved the more conditioned athlete as Shorter looked like he was short on breath by the middle of the second round.

Both fighters continued to throw plenty of punches, but Young’s seemed to have more sting in them, as Young fought through three times his head gear being grappled off.

By the third round, Young had pounded his opponent into submission, with Shorter visibly showing his disinterest with any more contact. Young dominated the second and third rounds on the way to a unanimous decision.

An exhibition fight to get both fighters some experience with their youth, local Gavin Kinniburgh battled Zab De Guzman from Cochrane.

The youngsters warmed up the crowd flashing solid jabs given their age and plenty of heart with both fighters giving as much as they received on the punch counter as the crowd roared with delight.

Besides Mills’ KO, there were two other pro fights as well, starting off with Lee Mein earning a TKO of Magrath’s Ken Frank in the heavyweight 200-pound plus division.

Both fighters worked the body early on with Mein visibly buckling Frank with a left hook.

Mein landed some strong shots in the second, showing Frank could take a hit and responding with some well-placed blows as well. A left-right combo by Mein was followed by a hook that downed Frank. Shortly after, with Frank getting rocked again, both wrestled themselves to the ground with the referee eventually calling the fight at 1:29 in the second round.

The fight that was prior to Mills looked like it might be easy pickings with late replacement fighter Tsidro Toala taking on Stuart McLellan and his impressive 21-2-3 record.

But Toala (10-6-1) more than held his own, getting in on the body shots in the first and second round to the point he may have been ahead on some people’s score cards, although the savvy veteran in McLellan was able to keep the damage to a minimum of any Toala flurry.

But some headbutts in the third round left a large cut over McLellan’s left eye which resulted in the doctor calling the fight resulting in a no contest in the entertaining 150-pound division.