Ralph standing up to CFL challenges 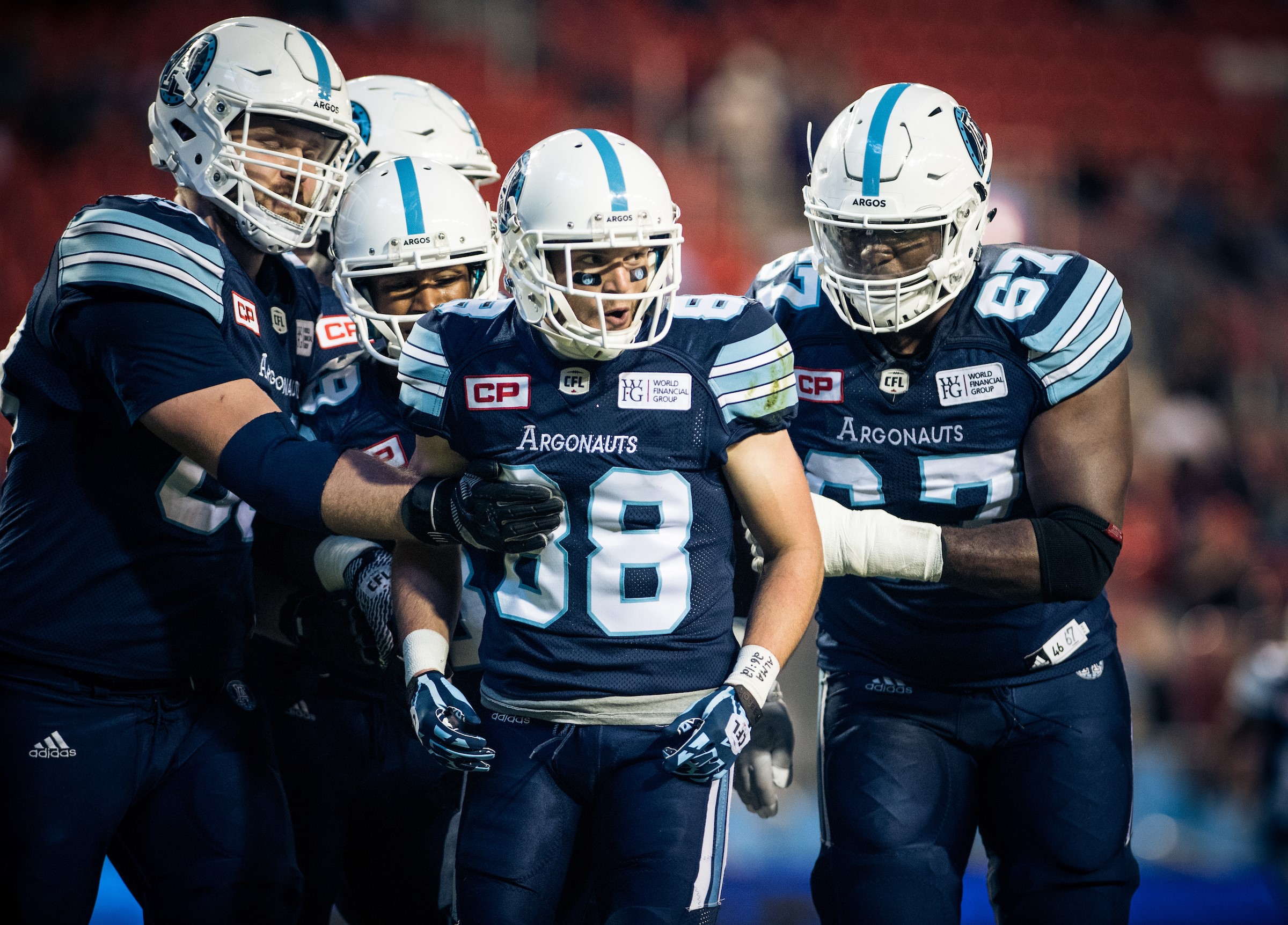 A rookie season for any professional athletes presents a wide variety of challenges.

For a football player, those challenges consist of many layers, from learning an offence and adjusting speed of the games, all the way to competing against the very best sports has to offer.

For Raymond’s Jimmy Ralph, the first six weeks of his Canadian Football League career have all been about adjustments, and learning the subtle nuances of the pro game.

“It’s been good so far,” said Ralph from inside the locker room in Mosiac Stadium in Regina, just after his Toronto Argonauts fell to 3-3 after a Saturday loss to the Riders. “I’m with a bunch of veteran receivers here in the receiver corps, so in the position I am in as a first-year rookie, I mean I have a lot to learn.”

Toronto’s group of pass catchers certainly have an abundance of knowledge to pass on, a fact not lost on Ralph.
“I’ve got guys like S.J. Green, Armanti Edwards, just to name a few, (Anthony) Coombs as well, guys that I can learn from. I’m just trying to take that in and kind of be the next guy up, wait for my opportunity and try to stay ready.”

Day in and day out, Ralph added he pays careful attention to how the Argonaut veterans prepare each week.

“Just how they go about their day and how they approach being a professional, when it comes to film study, working out, taking care of their bodies, just those things,” said Ralph about what some of the things he’s taken in from the veterans. “Those are things I’m sure they learned when they were young and they picked up as they went along.”

At the same time, Ralph is focused on doing all he can to prove he belongs on the field on game day.

“I’m kind of that next guy up right now type of thing. I’m trying to embrace the fact that I’m one of the guys and take in as much as I can, and when my opportunity is there, then I can use that knowledge I’ve gained.”

It’s a new role for Ralph, a dynamic receiver in the high school and college ranks, who is adjusting to life as a CFL rookie, looking to earn playing time.

“It’s definitely different than anything i have been used to. I’ve never been in this position before, so it’s an adjustment. I just try to learn the offence as much as I can so that whenever that player goes down, whether it’s S.J. or whoever it is, I can go in that spot.”

Learning the playbook as a wide receiver or slot back is key to Ralph’s weekly preparation.

“It’s tough because (Marc) Trestman runs a very complex offence, but I’m starting to grasp it all and I’m understanding it. His offence is very specific, so there’s a lot of details to the offence. It’s a lot of work but I love it.”

He’s also drawing inspiration and wisdom from his brothers, both former CFL players, and extremely successful athletes at that.

“I talk to them quite often. They ask me how practice has been going and that sort of thing. They’re giving me tips as well as these guys too. They’re veterans of the game as well as professionals, so I have a lot of people to lean on.”

Ralph developed his football knowledge base in Raymond playing for the Comets, an experience he said gave him a leg up on many of his teammates at the collegiate level.

“We’ve had a lot of success in Raymond but a big part of that was we had athletes, but we had coaching as well, so that prepared us for the college level. I just kind of had a bit of a head start compared to some other people.”

In Toronto, he now has the opportunity to learn from an experienced coaching staff led by Trestman, and one of the league’s best quarterbacks – Ricky Ray.

“It’s awesome,” said Ralph about playing with Ray. “As a kid, I watched him and my brother win a Grey Cup with him when I was an elementary kid, so just to have him in here, it’s a pretty cool experience. It’s good to have a quarterback like that and the way he sees the game. I learn from the receivers but I learn from him as well, just with the way he approaches everything. He’s such a good leader.”