Posted on September 5, 2017 by Westwind Weekly 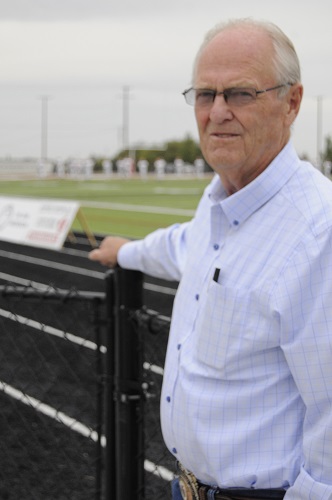 Herald photo by Dale Woodard Brian Dudley, the first head coach of the Raymond Comets in 1967, takes a view from the sidelines as the Comets get ready to face the Edmonton Harry Ainlay Titans Friday night at Comets Stadium in Raymond.

A half century of Comets football huddled up at Comets Stadium Friday night in Raymond.

As the current Raymond Comets geared up for another Southern Alberta High School Footbal League season as they hosted the Edmonton Harry Ainlay Titans Ð coached by Raymond product Brock Ralph Ð the Comets from yesteryear were on the sidelines to not only provide the cheering section, but to get involved in the festivities.

At halftime, the Comets celebrated 50 years of football with a member of each Comets from each year dating back to the inaugural season in 1967 getting the chance to step on the gridiron once again.

Among those Comets of yesteryear taking part in the festivities was Brian Dudley, the Comets first coach and the man who got the ball rolling for Comets football in the late 60’s when the team joined the Western Eight Football League.

However, there was some resistance at first.

“I wanted to start football and I never played,” said Dudley. “So I went after some people and asked ‘Do you want to support me on this? I think there’s a league forming and we can get a team in it.’ I wanted to get someone to back me and Bob Gibb was on staff, he used to coach Comets basketball for all those years. He said ‘Brian, you can’t have football here.’ I asked why and he said ‘Because my basketball team starts in September and I really don’t want them playing football.'”

“So I got him onside and he came in as an assistant coach for one year. We started it and contacted the Calgary Stampeders. They had some equipment and they came down and gave us some classes and some offences and showed our kids some basics and we went from there.”

On that first Comets team in 1967 was Bob Court, a Grade 10 student at the time.

“I think everybody that tried out made the team,” said Court. “Us Grade 10s didn’t get a lot of time in and there were a lot of big Grade 12s on the team. It was fun. Right off the bat, I loved it.”

The Comets were contenders right from the get-go, finishing second in 1967 and 1968 before winning the league in 1969.

“We beat Coaldale,” said Dudley. “I think that was the year we won four games by less than two points. It was because these kids never gave up. They were fit. We didn’t have a bunch of fancy plays, but we felt if we could block better, tackle better run faster and (do) the fundamentals things would fall together and they did.”

As Dudley and Court recalled memories from 50 years ago, Jeremy Fairbanks’ Comets memories are a little more recent, having graduated in the spring.

Still, the history wasn’t lost on him.

“It’s really special,” said Fairbanks. “I think playing sports for Raymond is something to be proud about, just the tradition we have. Everyone knows Raymond as a sports town, that’s just a really good feeling, to be a part of that.”

Since that championship in 1969, more titles at the league and provincial level have followed.

“Raymond has had a fantastic win percentage and its carried over because people want to be Comets,” said Dudley. “They know what they have to give. You can’t just run half speed. You run until you have pains in your chest. They’re dedicated kids. Their parents are supportive and the community is supportive. You watch the small kids runs around here, their goal is to be a Comet. So they do what they have to do and it’s carried through. It’s an amazing town. It’s Comet pride.”

“People from around (here) say there’s something in the water,” added Fairbanks. “But I don’t think there’s a way to pinpoint. It’s just a bunch of small town farm kids who made something special. It’s pretty cool.”

In Friday’s game, the Comets were defeated 28-15 by the Ttians.