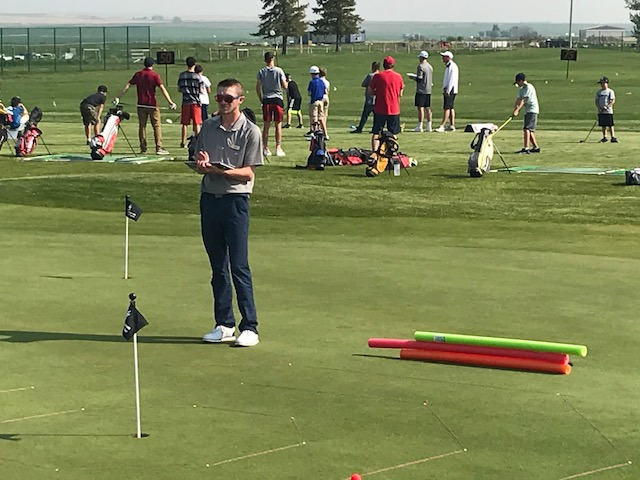 A new partnership has been forged between three local communities and their unique golf clubs and courses. The collaborative approach to golf includes Lee Creek Valley Golf Course in Cardston, Hell’s Creek Golf and Foot Golf Course in Raymond and the Magrath Golf Club.

“We came together and we meet monthly. We’re starting to work as an association to grow the game here in our region in southern Alberta. One of the byproducts of the collaboration is the Junior Golf After School Program,” noted Adam Bayne, general manager of the golf club in Magrath.

On Wednesdays in May, the golf clubs offered youth from all three communities, aged 6-17, junior golf clinics. “The first two weeks we each hosted our own junior clinics — the training component of this program. And then for the last two weeks everyone went to Raymond for the Get Out and Golf component,” Bayne explained. “Where we actually took, with a substantial amount of volunteers from the clubs, took the kids out on course and walked them through etiquette and proper on course protocol.”

Then the youth headed to Cardston for practice and training on course and then to Magrath for a wind-up session. “A drive, chip and putt competition followed by a banquet,” he said, adding all the juniors also received a prize regardless of where they finished during the competition.

Close to 50 new juniors from the three communities joined in on the festivities and were participants in the junior golf after school program. Participants have had little exposure to the game of golf.

“I think for year-one we’ve had a massive success,” he said. “And it’s going to help perpetuate the life blood of this game, which is our future generation.”

Plans are in the works for the program to be offered at the same time again next season.

“Each course has days when members can’t play because of hosting another event,” he said, adding it provides a very affordable option close to home. “Together is a better philosophy.”

Bayne said the golf clubs have collectively grown the game in this region by approximately 50 new youth golfers. “That may not have tried it before.”

Bayne added he is proud of the partners in the program for jumping on board. “We tried it and it’s been a success this year and it’s only going to grow in the future.”