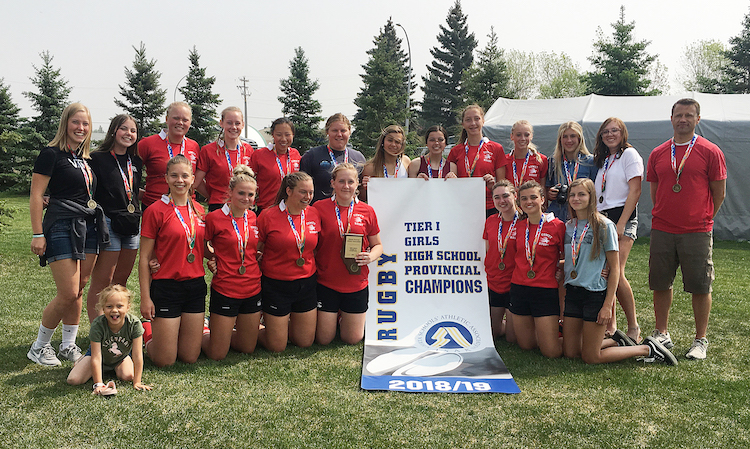 It was a historic weekend for the Raymond Comets at the Alberta School Athletic Association Rugby 7s Championships.
Raymond won the inaugural rugby 7s championship with a victory over a familiar foe – Edmonton’s Bev Facey.
The Comets earned gold with a 20-0 win over a Bev Facey team Raymond also faced in the 2015, 2016 and 2017 gold-medal game in the rugby 15s provincials.
Raymond’s 7s team featured 11 junior varsity players from Raymond High School, as the team capped off a perfect 4-0 weekend at the St. Albert Rugby Club.
The Comets opened play Friday with a 29-5 win over Bev Facey, and followed that up with a 40-5 win over Salisbury. Raymond defeated Bishop McNally 20-0 in the semifinals.
“It was a fantastic experience,” said Raymond coach Dan Bikman, who added the championship victory over Bev Facey was a huge achievement. “It was competition for us, for sure. They had Grade 12s playing and we had one Grade 11 and the rest were Grade 10s.”
The coach added the provincial tournament was the first 7s experience for his players, and it took a bit of time to make the adjustment.
“We got scored on every game on Friday, and as we got better as the group, we seemed to gel and get the system down a lot better.”
In the end, the decision to form a 7s team, specifically for the provincial tournament, was all about giving more players an opportunity to experience some high-end competition.
“When we spoke to the school administration about it, we basically just said it’s going to give a bunch of kids an opportunity to compete that they otherwise wouldn’t get.”
And they did more than just compete, as the Comets came home with the first-ever Tier 1 girls provincial 7s banner.
Bikman added last year, the team left 28 players at home when Raymond made the trip to Calgary for the Tier 1 15s provincial tournament. With an average of 55 players coming out for practice this year, that would have meant a number of players would have missed out on the provincial experience again this year.
“We really didn’t know what to expect,” said Bikman about the 7s provincials. “We encouraged the kids to just enjoy the experience and not worry about winning.”
With limited preparation time, and no preview experience playing the 7s game, Bikman added the format did suit his athletic roster just fine.
“7s favours the types of kids we have in our program, because it’s less physical and there’s a huge focus on passing and running.”
The 2019 championship roster included Taia Bohne, Winnie Li, Taylor Ralph, Jordana Fraser, Hattie Anderson, Mataya Francis, Elena Heggie, Taya Hamon, Dixie Keeping, Brynlee Quinton and Tanly Schmale.
Bikman was joined on the coaching staff by Kora Schmale, Madi Miller and Emily Atwood.