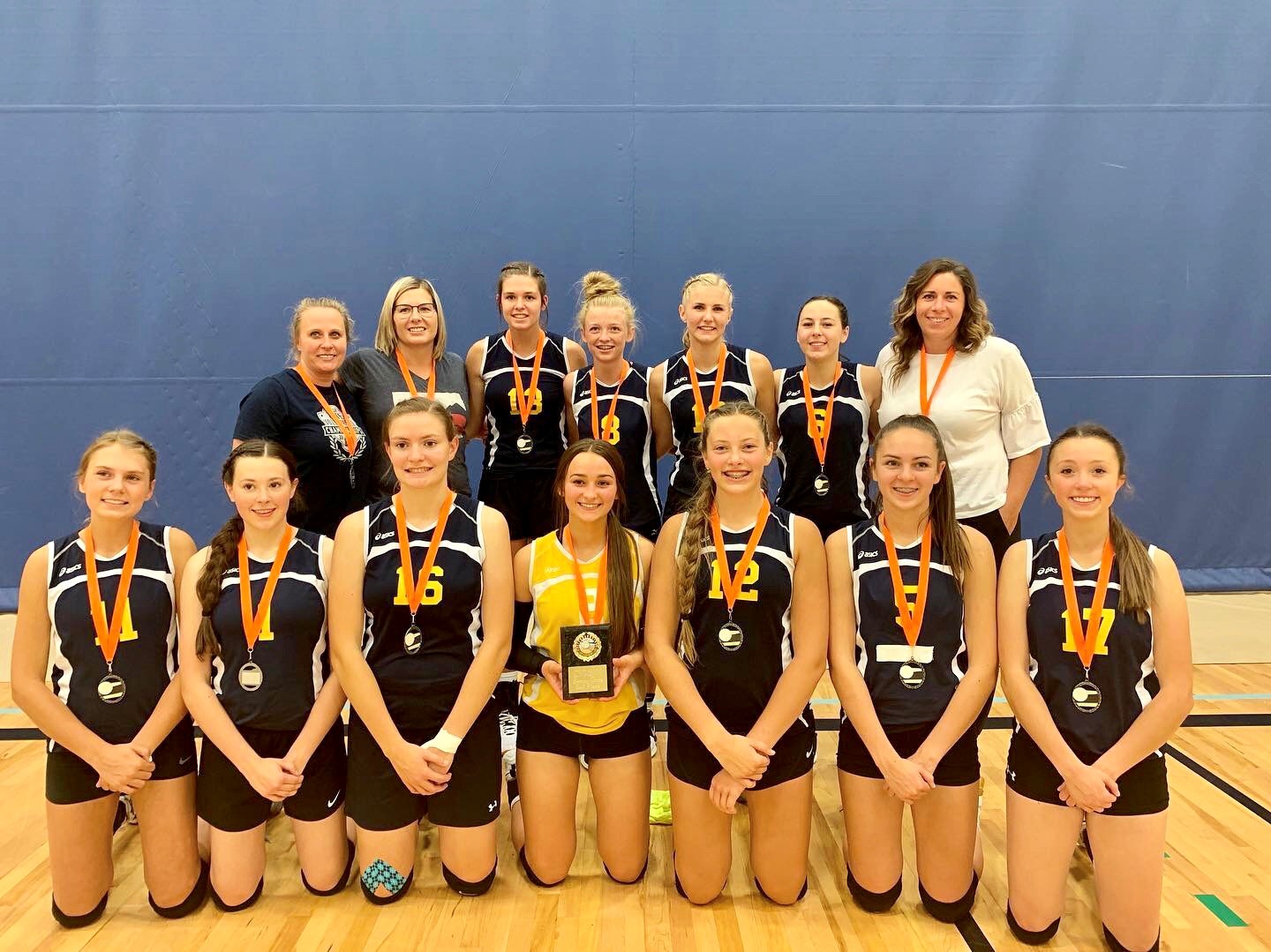 The Magrath Pandas volleyball team kicked off the 2019 tournament season in fine fashion.
A silver medal was the result at a weekend tournament in Airdrie, a 3A/4A tournament hosted by W.H. Croxford High School.
It was a challenge the young 2A team out of Magrath met head on.
“The level of play was very competitive and a great experience for our girls,” said Pandas coach Tabatha Ogden.
Magrath placed second in its pool, and only lost one set in round-robin play.
“We went on to play Drumheller in the quarterfinal, taking them in two straight sets,” said Ogden, who added the next playoff match was much tougher. “Our semifinal match against Olds High School went to a third set. We were down 0-7 and fought back to win the set 16-14.”
The third-set comeback proved to be build off a common theme for the Pandas all weekend, as the coach added her team showed great resilience.
“These girls are proving to have great mental strength and fought back to win several times throughout the tournament.”
That resilience was not enough in the championship game, however, as Ogden’s team ran into a powerhouse.
Our final match was against the Holy Trinity Knight from Okotoks,” she said. “They are a top 4A team. They beat us two straight.”
Team success was only part of the equation for the Pandas, as two individuals were also recognized for their efforts in Airdrie.  A tournament all-star honour went to Hattie Ogden, and a team all-star honour went to Abi Payne.
In league play last week on Sept. 11, Magrath took three straight set from Immanuel Christian Secondary School by scores of 25-21, 25-12 and 25-17.
The Zeniths also took a win in league play last week, as Magrath defeated Catholic Central by scores of 13-25, 25-22, 25-17 and 25-16.
“The match last week against Catholic Central went well,” said coach Shane Orr. “We started out shaky but pulled it together. We lost the first by a ton and then won the rest by a good margin. Our serving and passing were our strengths in that match.”
On the weekend, the senior boys team was in Calgary, as the Zeniths finished fourth out 20 teams at the tournament.
“We were only one of seven different teams that were not 4A teams at this tournament, so we considered this an accomplishment,” said Orr. “We finished second in our pool to Western Canada, who is a great volleyball team. We beat Cochrane quite handily in the quarterfinals to get to the semifinals, but lost to our rival, LCI, in the semis.”
As the season progresses, Orr added the goal is to ensure his team is as well-rounded as possible.
“When we serve and pass well, we feel like that gives us the best chance to win. We are working on our defence right now and once that is where we want it, we will start working more on our offence. We have some gifted offensive players, so once we get both sides of the net clicking more consistently, I believe we will be a tough team to compete against.”

Cutline: Pandas players and coaches show off the silver medals the team earned on the weekend in Airdrie.
Photo by Garrett Simmons