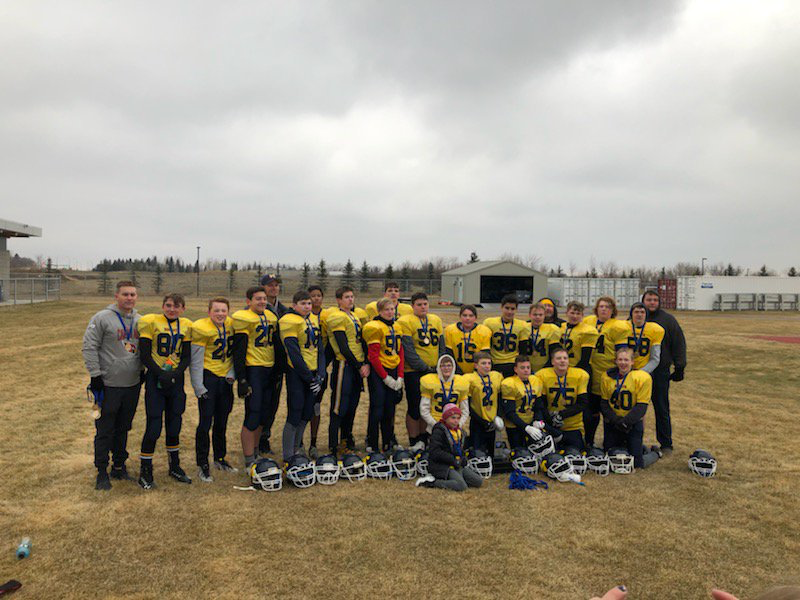 Football is back in Magrath.
Any doubts of the sport’s resurgence in town were erased on Saturday, as Magrath’s bantam team earned a convincing 50-12 win in the Tier 4 provincial championship game over the Red Deer Notre Dame Jr. Cougars.
“It was an amazing way to end the year,” said Wolverines coach Brett Barfuss, whose team actually trailed 6-0 after the first quarter.
A botched Red Deer lateral turned into a 55-yard touchdown for the Jr. Cougars, as the broken play was the only score of the first quarter.
The second quarter belonged to Magrath, however, as a 60-yard touchdown run by quarterback Joe Cook, on the last play of the half, gave the Wolverines a comfortable 23-6 lead at the half. That long TD run, coupled with a safety, gave the Wolverines nine points in the final minute of the half, which proved too much for Red Deer to overcome.
“That really deflated them” said Barfuss, whose team cruised from there. “From the second quarter on, we owned them.”
Magrath put up 27 more points in the second half, as the Wolverines churned out 504 total yards, which included 385 on the ground, as Cook also passed for 119.
“It was a well-balanced attack from us,” said Barfuss.
Cook keyed the attack with 98 rushing yards and scoring runs of one, 10 and 60 yards. He also tossed a 65-yard TD pass to Ty Thompson.
Noah Holthe ended the day with 151 rushing yards, which included a 34-yard score, while Tanner Morales added 79 yards on the ground, and a 48-yard TD run. Morales led the defence with seven tackles. Matt Payne added a 10-yard rushing touchdown.
Red Deer came into the championship game with a 5-3 record, with three losses to Tier 1 opponents. But as it turned out, the Jr. Cougars had not faced an opponent as talented as the Tier 4 Wolverines.
“We had a couple of Red Deer parents come up to us and say their kids hadn’t been hit that hard all year,” said Barfuss.
Magrath edned the game will all 10 of its Grade 9s on the field for the final three plays, to give those players a proper send off, as Barfuss added the bantam title was a culmination of five years of hard work for the group.
“With these boys, we started back when they were in atom in Grade 5,” said the coach, who mentioned that atom team was the only football team in Magrath at the time. “We had a successful year. We never lost a game.”
The goal clear – keep that core of kids interested in the sport and let them experience some success along the way. That formula worked to perfection, as the Grade 9s capped off their minor-football careers with a championship.
“We’re pretty pumped up with how it ended up for these boys.”
Now, Magrath has teams in atom, peewee and bantam, as Barfuss added the goal is to continue fielding a bantam team out of Magrath.