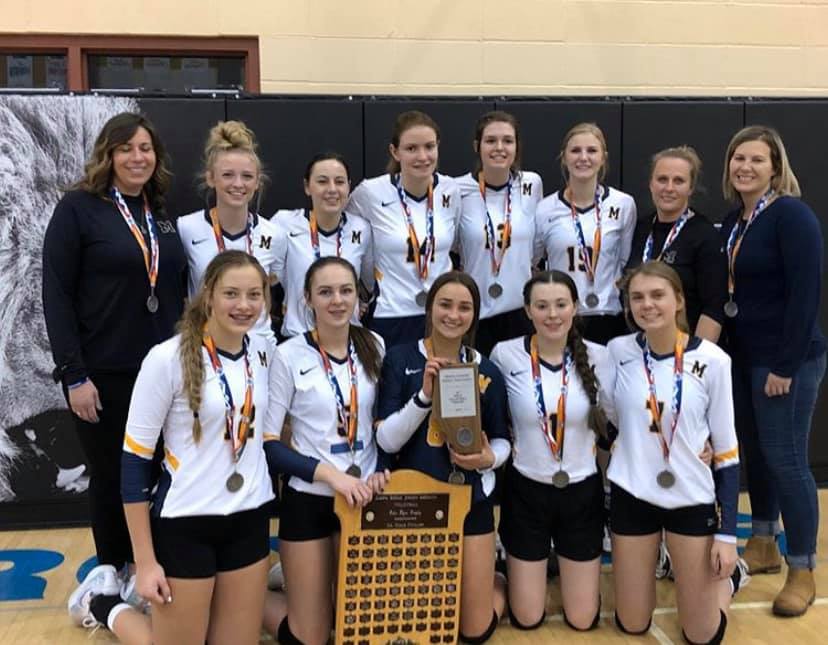 A strong pool performance did not translate into playoff success for the Magrath Zeniths on the weekend at the 2019 3A Boys Volleyball Provincials.
After a second-place finish in Pool A of the Alberta Schools’ Athletic Association tournament in Magrath, the Zeniths fell in the quarterfinals to Strathcona Christian. Magrath dropped the match two games to none.
Strathcona Christian, to its credit, went on to win the provincial title, with successive wins over St. Joseph in the semifinal and Barrhead in the championship game. Strathcona Christian only dropped one set in the playoffs, after the team went 4-1 in round-robin play, which was good enough for first place in Pool B.
Magrath’s strong showing in Pool A included a 4-1 match record, as the Zeniths won eight sets and dropped three, en route to a second place showing.
Magrath dropped a high-scoring match to Barrhead (22-25, 29-31) and defeated Cochrane in a three-set thriller (25-21, 26-28, 15-11). The Zeniths easily swept Queen Elizabeth (25-8, 25-13) and also swept H.J. Cody (25-18, 25-21) and St. Peter the Apostle (26-24, 25-17).
In Three Hills, the Magrath Pandas settled for silver in the 2019 2A Girls Volleyball Provincials.
Magrath looked to be on a roll heading into the final, as the Pandas swept Calgary Christian in the quarterfinals, and then defeated a tough Vauxhall team two sets to one in the semifinal.
However, Magrath ran into a talented Rundle College team in the final, a team that swept through the quarterfinal and semifinal in straight sets. Rundle continued its playoff dominance with a two sets to none win over Magrath in the championship match.
It capped an undefeated run for Rundle, as the team also went 5-0 in round-robin play, which included a 27-25, 25-25, 15-7 win over Magrath.
That was the only loss for Magrath in Pool A play, as the Pandas finished second with a 4-1 record. Magrath won nine sets in round-robin play and dropped only two.
The Pandas took a 25-16, 25-20 win over Sexsmith Secondary and earned a 25-18, 25-17 sweep of Christ the King. Magrath also took a 2-0 win over Onoway, by scores of 25-8, 25-19 and swept the host Three Hills team, 25-16, 25-16.