Comets and Pandas look to earn spots in 4A zone championship 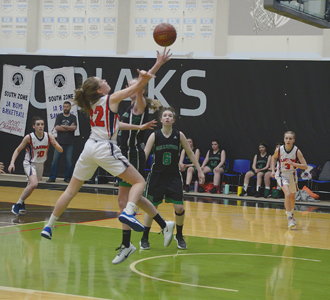 UP AND AWAY: Courtney McKee of the Stirling Lakers girls basketball team reaches for the basket versus Erle Rivers during 2020 1A South Zone Basketball Championships hosted at Lethbridge College on Tuesday night. WWN Photo by Trevor Busch

The Raymond Comets and Magrath Pandas both have semifinal dates today in the 4A Girls Southern Alberta High School Basketball League 4A South Zone Tournament.

Raymond will take on Cardston tonight at 5 p.m. at the University of Lethbridge, while Magrath will face the Lethbridge Collegiate Institute Clippers at 3 p.m.

On Tuesday, Magrath upended Catholic Central 75-50 to earn a spot in the semi.

Hattie Ogden led the way for the Pandas with 23 points, while Lucy Wilde chipped in with 11. Macie Wocknitz added nine.

Raymond earned a first-round bye, by virtue of a 13-1 league record.

The Comets earned first place after a big weekend that included a 111-30 win on Friday over Chinook and an 80-37 win Saturday over W.R. Myers.

Gibb had 14 more against Myers, while Terry added 12.

Magrath ended the regular season in third at 10-4 after Saturday’s 69-47 win over Cardston and Saturday’s 75-30 win over Chinook.

Elley Johnson had 14 against Cardston, while Carly Blackmore chipped in with 13.

Against Chinook, Hattie Ogden had 13m Emily Hall added 11 and Blackmore and Johnson finished with 10 each.

Jane Heggie had 21 on Friday, as Ivory Romeril added 15 and Drew Armener had 12.

Mataya Francis connected for 22 in Saturday’s game, as Armener had 18 and Madison Mora added 12.

JV playoffs kicked off Monday, as Raymond rolled to an 85-38 win over Chinook. Francis had 26 for Raymond, as the Comets also received 17 from Armener and 11 each from Jane Heggie and Abi Edwards.

Raymond took on LCI Wednesday at 6 p.m. in Raymond, with a spot in the final on the line (score not available at press time). A win in the Wednesday semifinal would put Raymond in the championship game, set for Saturday at 10 a.m. at the U of L.

In 1A girls zone play, the Stirling Lakers opened the tournament with an 88-36 win over the Erle Rivers Novas. Hillary Shockey scored 25 for Stirling, while Reese Gurney and Halle Smith added 15 each. Courtney McKee and Talia Oviatt had 12 points each.

Stirling will take on St. Mike’s tonight (Thursday) at 8:30 p.m. on Court A at Lethbridge College.