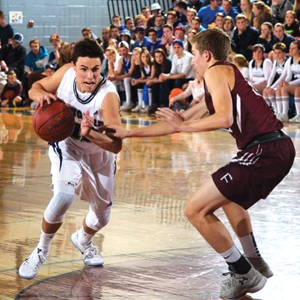 Cardston product Ty Lewis has committed to join the Kodiaks for 2020-21.

A multi-sport athlete, Lewis competed in both basketball and football for Cardston High School.

“Ty is a player that was recruited by USPORT and other ACAC programs, so being able to sign him as a Kodiak is an exciting day,” says Heggie. “He plays a tough, unselfish game of basketball and winning matters to him.”

Quick ball movement on offence and high-intensity defence were hallmarks of last year’s Kodiaks team that went 20-1 in conference play, capturing the ACAC south division title for the first time since 2011.

Unfortunately, the team fell short of its goal of winning an ACAC championship. However, with multiple returning core pieces, Heggie is banking on key additions like Lewis to help push the Kodiaks to the next level.

When asked to describe his game, Lewis hails himself as a pass-first point guard that can also shoot the three – a combination that will surely keep defenders on their toes.

“He can shoot it and facilitate the ball, and he won’t shy away from getting into someone on the defensive side,” says Heggie. “He will give us some added depth at combo guard where the practice competition will be intense.”

Lewis follows in the footsteps of his uncle Orvil Smith, who suited up for the Kodiaks in the early 1980s.

Despite having competing offers, Lewis says the Kodiaks program instantly made him feel welcome and that he appreciates the “family feel” that Lethbridge College provides.

“It means a lot to join the Kodiaks program,” says Lewis. “I have always had the goal of playing college athletics and the Kodiaks have given me that chance.”

While no one knows for certain what the upcoming season will look like due to the COVID-19 pandemic, Lewis says he can’t wait for the opportunity to put on the Kodiaks uniform.

“I’m looking forward to getting back on the court with a winning program that works hard,” says Lewis.

Learn more about the Kodiaks at gokodiaks.ca