Grinding first half for the Comets 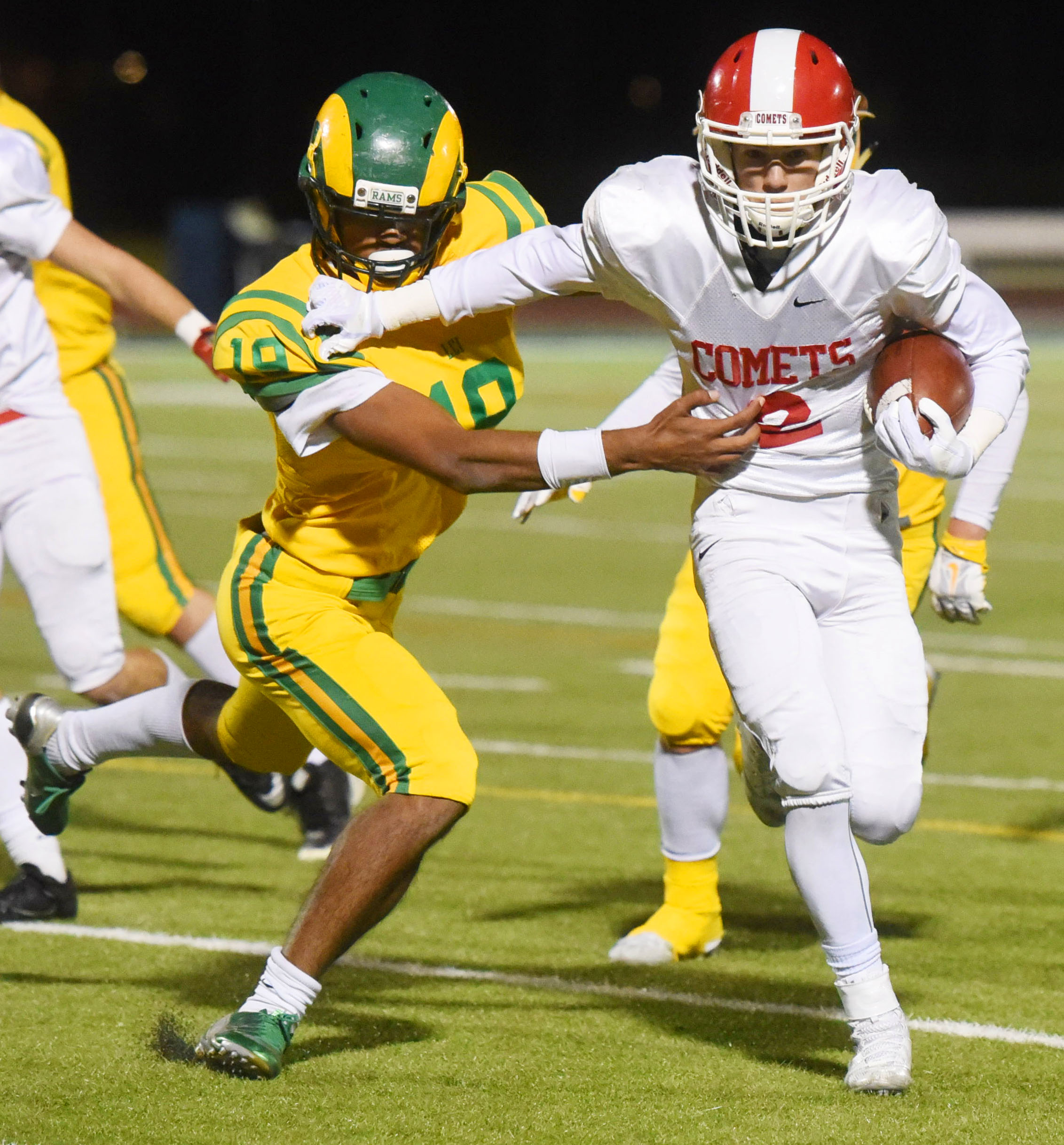 Southern Alberta Newspapers photo by Tijana Martin Jordan Rivest of the LCI Rams ties to tackle Brady Silito of the Raymond Comets during Thursday night's game at the University of Lethbridge Stadium. @TMartinHerald

The Raymond Comets are off to the Tier 1 provincial championship game.
In other southern Alberta classic, the Comets advanced to the final after a 16-14 win over the Lethbridge Collegiate Rams in a Saturday tilt at the University of Lethbridge Stadium.
It was a tight contest after two quarters, where Raymond emerged with a slim 3-0 lead.
“I felt our defence played a really solid first half,” said Raymond assistant coach Matt Baines. “LCI didn’t get into field goal range all half. We tackled well and we felt really confident going into the second half defensively.”
A halftime lead is always the end goal but for the Comets, it was a matter of what could have been on offence.
“Offensively, we had a tough time getting it into the end zone once we got inside their 20,” said Baines. “We were inside their 20-yard line four times and came away with three points. We needed to be better in the red zone in the first half. LCI’s defence made plays and we didn’t. Simple as that.”
Those missed opportunities came back to haunt Raymond. In the middle of the third quarter, the Comets turned the ball over at its own two-yard line. LCI scored a touchdown a few plays later to take the lead.
“It felt a lot like our first game of the season against them where we were playing very well defensively but due to a bad turnover, we gifted our opponent a huge touchdown,” said Baines.
The Rams had all the momentum after LCI recovered an onside kick. But Raymond’s defence held strong to get the ball back for the offence.
Then, early in the fourth, quarterback Houston Ralph scrambled out of the pocked and bought himself enough time to find Pyken Easthope for a 15-yard completion.
“Pyken made four LCI defenders miss him and then turned on the jets and took the ball 54 yards for a touchdown,” said Baines, as Raymond missed the extra point to make the score was 9-7 with just over eight minutes to go in the game.
Raymond put together another strong scoring drive later in the game, as Houston Ralph scored on a two-yard QB sneak to put Raymond up 16-7 with about 3 minutes left. The TD was set up by a huge 35-yard catch by Everson Harker.
LCI put together a drive of its own and finished it with a 20-yard TD pass with 36 seconds left to make the score 16-14.
The Rams tried an onside kick and the Comets recovered it, as Raymond went into victory formation to secure the win.
It was a tale of two quarters for the Raymond offence, as the unit was able to put 13 points on the board in the second half.
“We finished drives,” said Baines. “That’s the biggest thing. I also feel our QB Houston Ralph made some great plays with his feet to escape the pressure LCI was bringing on defence.”
There were not too many secrets left for the southern Alberta rivals, as Saturday’s game came down to execution, according to Baines.
“Playing the same team three times and the last couple only being two weeks apart is a bit different for sure. I feel both teams knew exactly what we were in for. Our game plan stayed the same and it seemed theirs did too. I think the wind played a factor in the game as well.”
For the Comets, the season continues with a weekend trip to Edmonton and a spot in the Tier 1 final against the Ross Sheppard Thunderbirds. It was not a position many thought Raymond would be in after a slow start to the season.
“We are excited that we have gone undefeated since the end of September,” said Baines. “We take a lot of pride in the fact that no team in Alberta has played half as many top 5 Tier 1 ranked teams as we have this season. Not even close.”
Unfortunately, some of those early-season losses kept the Comets from advancing to the newly formed top Brian Fryer Top 4 Division.
“We set up a super-tough schedule this year and felt that was what we needed to have our team ready to play for a provincial title at the end of November,” said Baines. “It’s disappointing that the selection committee didn’t feel our season was worthy of ranking us in the Top 4 so we could play for the Brian Fryer Cup. We are disappointed that men in desks have decided if we could play in that playoff and not left it up to the players on the field like it has been for the last few decades. However, this weekend we will go to Edmonton and do what we have done every week this season, and that is to do our best and fight to win the game.”
Baines added the coaching staff and the team has a very clear goal in mind this weekend again Ross Sheppard, a team Raymond does not know a ton about.
“We know enough to know that if we play well, we will win this game. We are fully expecting to win.”
With one week left in the season, and one week of practice remaining, Baines said there are a few simple messages the coaches will hammer home.
“We will encourage the players to focus on what got us here. This is a great group of kids and they worked very hard to be able to get better as a team. We feel there is no team in the whole province that has improved more from Day 1 to now than us.”
This weekend, the high school team will look to make it back-to-back championships for Raymond. Last weekend, the Raymond bantam Comets took the Tier 1 title with a 9-0 win over the Calgary Cowboys.