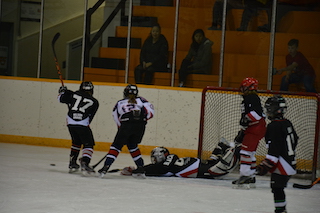 As Central Alberta Hockey League action continued this past weekend, all Raymond Knight teams were on the ice as their December schedules started.
U11
The U11 Knights had a single game on tap this past weekend which resulted in a close game. On Saturday afternoon, the Picture Butte Blades made their way to Raymond and both teams battled hard as the Knights would eventually win the game 8-7.
Jaxton Rodeback and Dax Hill were on fire as they scored five and three goals, respectively. Lane Smith also chipped in with a single assist. Kalani Purcell was between the pipes and faced 25 shots.
This coming weekend, the U11s see a pair of games on their schedule. On Saturday, Redcliff makes their way to Raymond for a 3 p.m. puck drop and then the Knights hit the road on Sunday for a 1 p.m. game in Taber.
U13
With one game this past weekend, the U13 Knights battled hard on the road, but came up short as Vulcan skated to a 5-2 win on home ice.
Bronx Hill and Lane Smith had the Knight goals, while Tavares Chief Moon had an assist. Nate Nelson got the start between the pipes and turned away 27 shots.
This coming weekend sees the U13s hit the ice twice. On Friday, Raymond welcomes in Bow Island/Foremost for a 7 p.m. game and on Sunday, the team travels to Picture Butte for a 10:30 a.m. puck drop.
U18
Only one game was on the U18 Knights schedule this past weekend as the team welcomed in Brooks on Saturday evening.
In a back and forth affair, Brooks would find the back of the net last en route to a 5-4 win over Raymond.
Brody Smith potted two goals, while Daxon Helgerson and John Pickens had singles. Jake Gedrasik also found the scoresheet with a single assist. Tyler Creed saw 36 shots fired his way in the blue paint.
The U18 Knights see one more game this coming weekend when Bassano travels to Raymond for a 5:30 p.m. Saturday night puck drop.